But reading Joe Swash’s ode to his father Ricky, who passed away suddenly when the London-born actor and presenter was 11 years old, is incredibly moving.

“He was a London taxi driver but he would do a lot of half marathons, he would run three or four times a week,” Swash recalls with pride.

“He really ate healthy. Like he would cut the fat off his bacon – I love the fat on my bacon! The doctor said it was a thing called sudden death syndrome,” Swash explains.

Now 40, the former EastEnders star, who has just released his first recipe book, says he had difficulty coming to terms with his grief as a child.

While he’s never had counselling, Swash says he’s always found cooking therapeutic, which is why he’s the main chef in his household.

The book aims to help other busy parents put wholesome meals on the table. “Like a lot of people, we’ve got families, we both work. It’s all the sort of things that Stace and I do to make our lives easier,” says Swash. 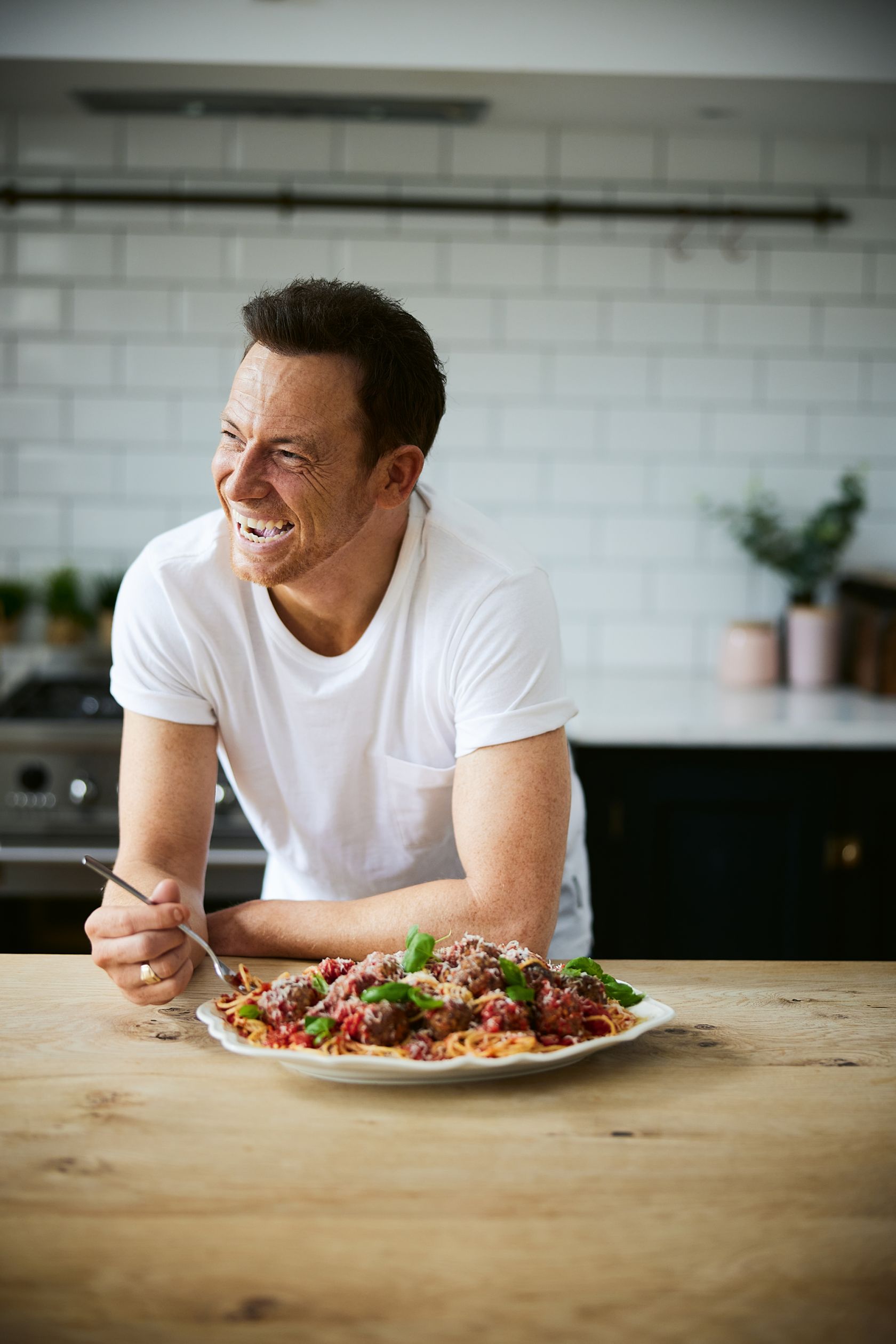 1. Put the flour and yeast in a bowl and stir. Drizzle in the oil, then add the Marmite, salt and sugar or honey. Gradually work in the water until you have a fairly sticky dough.

2. Turn the dough out onto a floured work surface and knead until it is smooth and elastic. There is a very simple test called the ‘window pane test’ to check if it has been kneaded for long enough. Very gently stretch the dough – if you can stretch it to the point where it is almost thin enough to see through, without it breaking, it is ready.

3. Put the dough back in the bowl and cover with a damp tea towel. Leave it somewhere warm for one-and-a-half to two hours until it has puffed up to about twice the size.

4. Turn the dough onto a floured surface and knock the air out of it so it deflates. Shape it into a large rectangle – about 35 x 25cm. Mix the Marmite with the cream cheese – it will go quite runny – and spread it all over the bread. Sprinkle with the grated cheese.

5. Roll up the dough along the longest side, quite tightly, then cut it into 12 rounds. Arrange the rounds over a baking tray lined with baking paper. Space them a couple of centimetres apart as they will spread and touch one another – like a tear and share bread.

6. Cover with a damp tea towel and leave again – this time for about 30 minutes – until the dough has increased in size but is still quite firm. Preheat your oven to its highest setting.

7. Brush the rounds with beaten egg and sprinkle with cheese. Bake in the oven for 20–25 minutes until they are cooked through and a deep golden brown. Serve warm from the oven. Store any leftovers in an airtight tin for a few days. 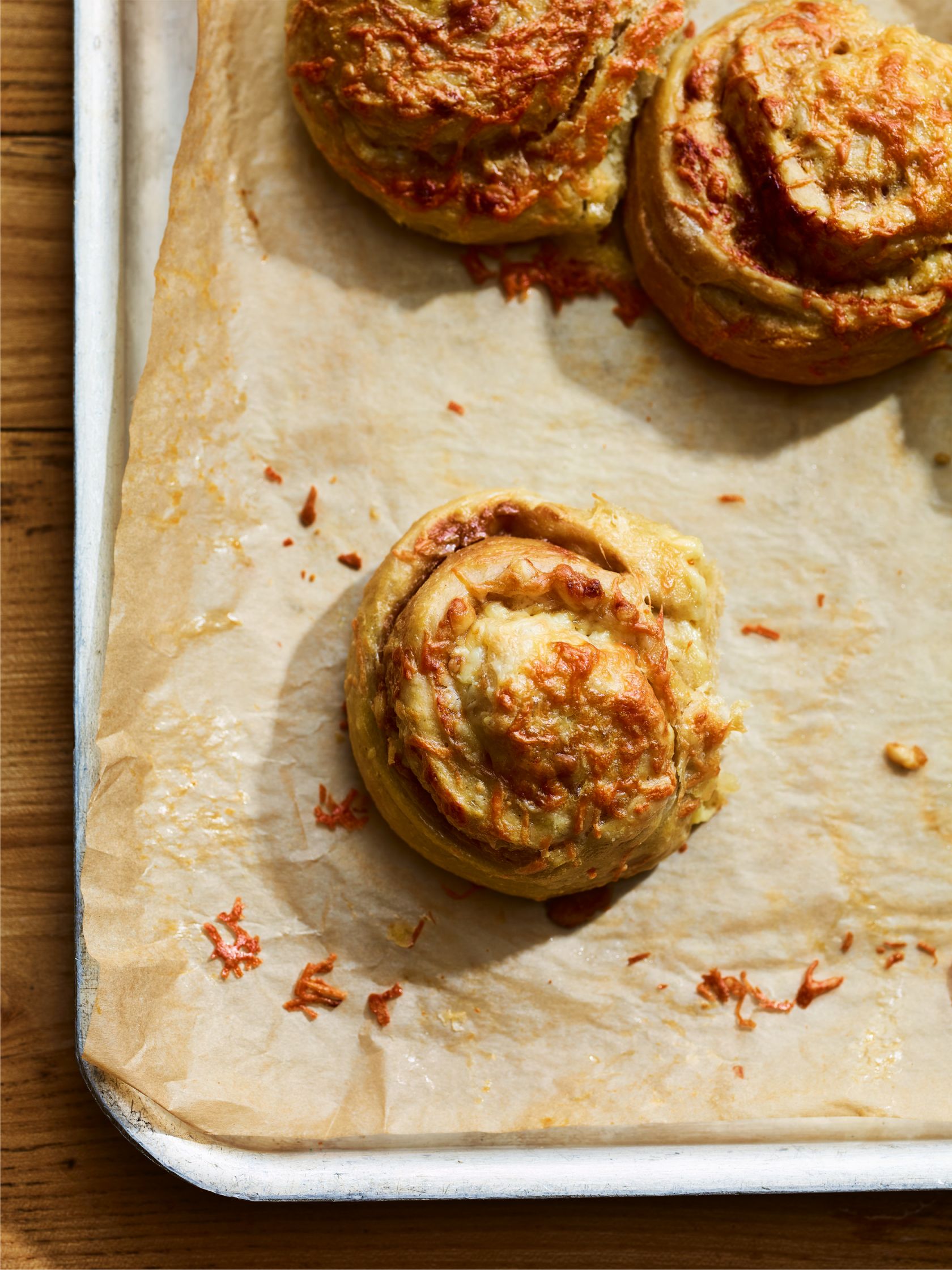 1. Heat the olive oil and half the butter in a large sauté pan. Add the onion or shallot and the leek and cook very gently, stirring regularly, until soft and translucent.

2. Add the mushrooms to the pan. Turn up the heat and fry until they have given out their liquid and look dry but glossy. Add the garlic and thyme and stir for a couple more minutes.

3. Add the rice and stir for a couple of minutes until glossy with butter. Season with salt and pepper. Pour in the wine or Vermouth and let it bubble away until almost completely evaporated.

4. Add a large ladleful of the hot stock. Stir constantly but slowly until most of the liquid has been absorbed by the rice, then continue to add ladlefuls of stock in the same way until the rice has plumped up and is al dente and the sauce around it is creamy. You may have a small amount of the stock left.

5. Add the remaining butter and the Parmesan and beat it into the risotto – this will make the risotto extra creamy. Taste and adjust the seasoning if necessary. Cover and keep warm.

6. Place a frying pan over a high heat and add the butter. When it is foaming, add the mixed mushrooms and fry them very quickly until well browned. Add the garlic and stir for a couple of minutes, then season with salt and pepper.

7. Serve the risotto garnished with the mushrooms and more grated Parmesan for people to add at the table. 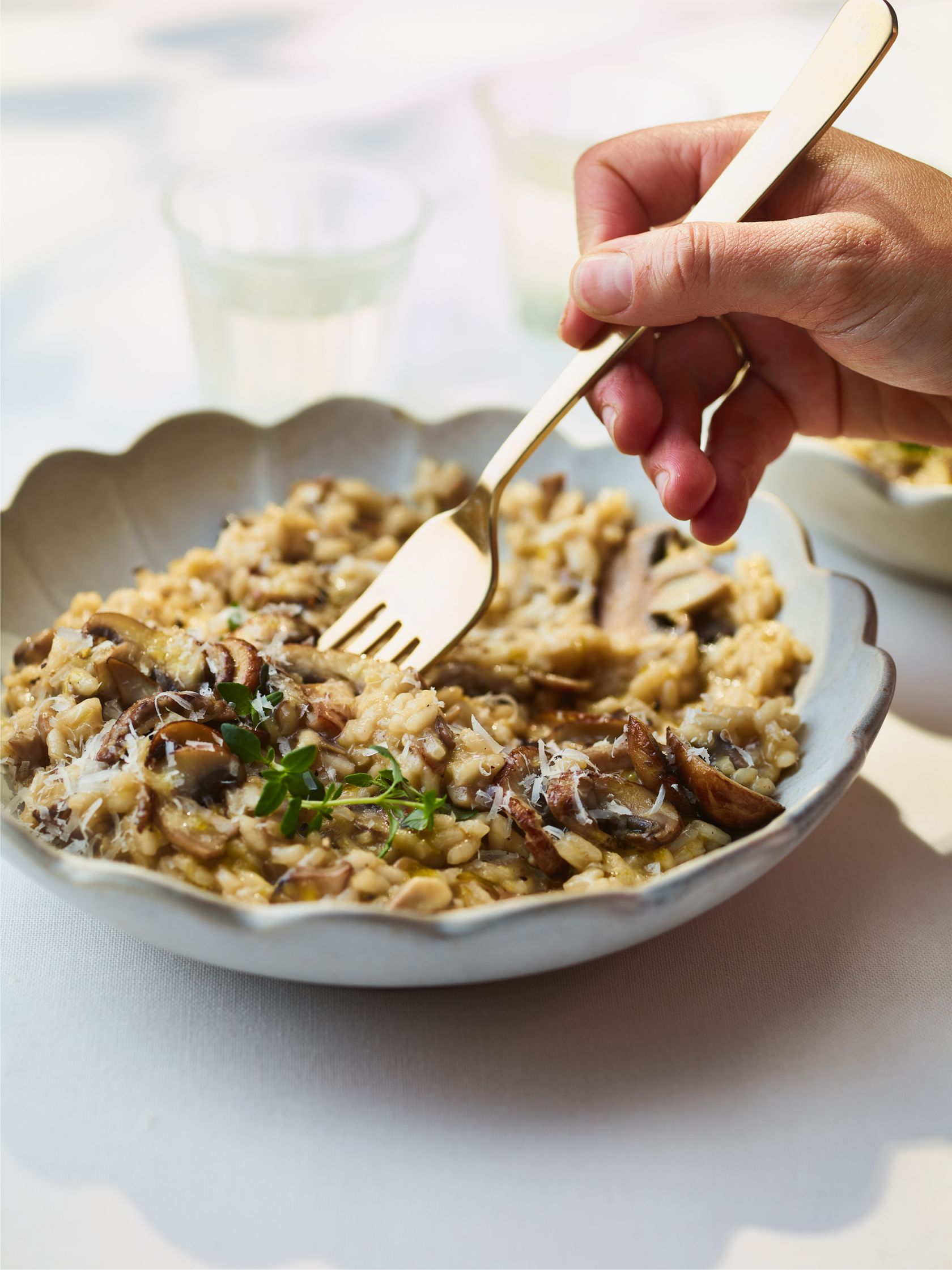 a few drops of vanilla extract

To coat the ramekins:

1. First make the sauce. Put the raspberries, sugar and lemon juice in a saucepan with 50ml of water. Heat slowly, stirring until the sugar has dissolved, then continue to cook until the raspberries have broken down.

2. If using the cornflour to thicken, mix it with a splash of water. Stir into the berries and keep stirring until the sauce starts to thicken. Push through a sieve into a clean saucepan and add the framboise, if using.

3. You need four 150ml ramekins. To prepare them, brush melted butter around the insides. Dust the insides with caster sugar and put the ramekins in the fridge to chill.

4. Mix the sugar, flour, cornflour and white chocolate together in a medium bowl.

5. Heat the milk with the pared orange zest, if using, and the vanilla extract. When the milk is close to boiling point, pour it from a height over the flour mixture, whisking as you do so. Keep whisking until the chocolate has melted and you have a lump-free liquid.

6. Tip the mixture back into the saucepan and heat, bringing it back up to boiling point. Stir constantly as the custard mixture will thicken very quickly. As soon as you can tell it is thickening, whisk vigorously to prevent any lumps forming.

7. Remove the pan from the heat and transfer the custard to a bowl. Leave to cool, then leave in the fridge to chill for at least half an hour or until you are close to wanting to cook your soufflés.

9. Whisk the egg whites with the cream of tartar, if using, to stiff peaks stage. Fold into the custard mixture, a third at a time. Be gentle, so you don’t knock all the air out of the whites.

10. Ladle the mixture into the prepared ramekins right to the top. For the best rise, scrape a palette knife cleanly across the top, then run your finger around the inside rim of each ramekin.

11. Put the dishes in a roasting tin and carefully pour just-boiled water around them. Bake in the oven for 12-15 minutes, until well risen and lightly browned on top. Do not open the oven door to check during this time, as it will cause the soufflés to collapse!

12. Transfer the ramekins to four plates or shallow bowls. Pass the raspberry sauce and berries round – it is traditional to break into the top of the soufflé and pour in the sauce and/or cream or ice cream. 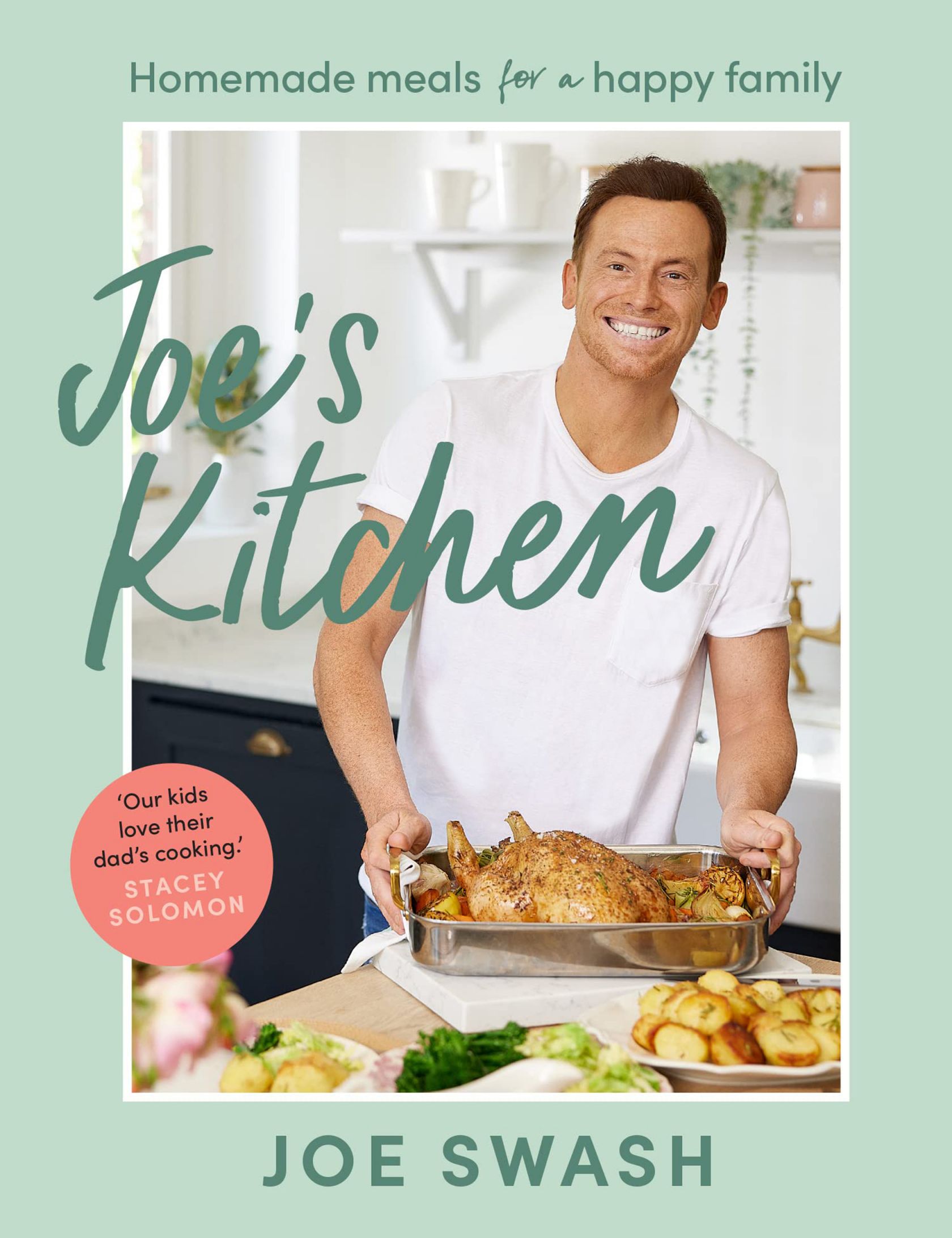 Joe’s Kitchen: Homemade Meals For A Happy Family by Joe Swash is published by Pavilion Books.