Rockhopper is a friendly five-piece live rock band, formed in 2019 in the Algarve, that play classic and iconic rock covers from the 50s through to today.

Their eclectic mix brings something special to each gig or event they perform at, where what you hear is what they play!

The band is formed by bass player, Roy West, lead guitarist and vocals, Tim Jackson, lead vocals and acoustic guitar, David Currah, orchestration and instrumental, Ken Blunt and professional drummer, Stick, with their ethos being “to have as much fun as the people watching us!”

I had the pleasure of speaking with Roy West, who has been playing bass for 40 years. In terms of inspiration, he told me that in his younger days it was “loud, hard, heavy rock music so Motörhead, Metallica and AC/DC” and that he would only ever buy live studio albums. “You can almost always find me in a Motörhead t-shirt and if you look at the Rockhopper logo, one of the penguins has a Motörhead t-shirt.” 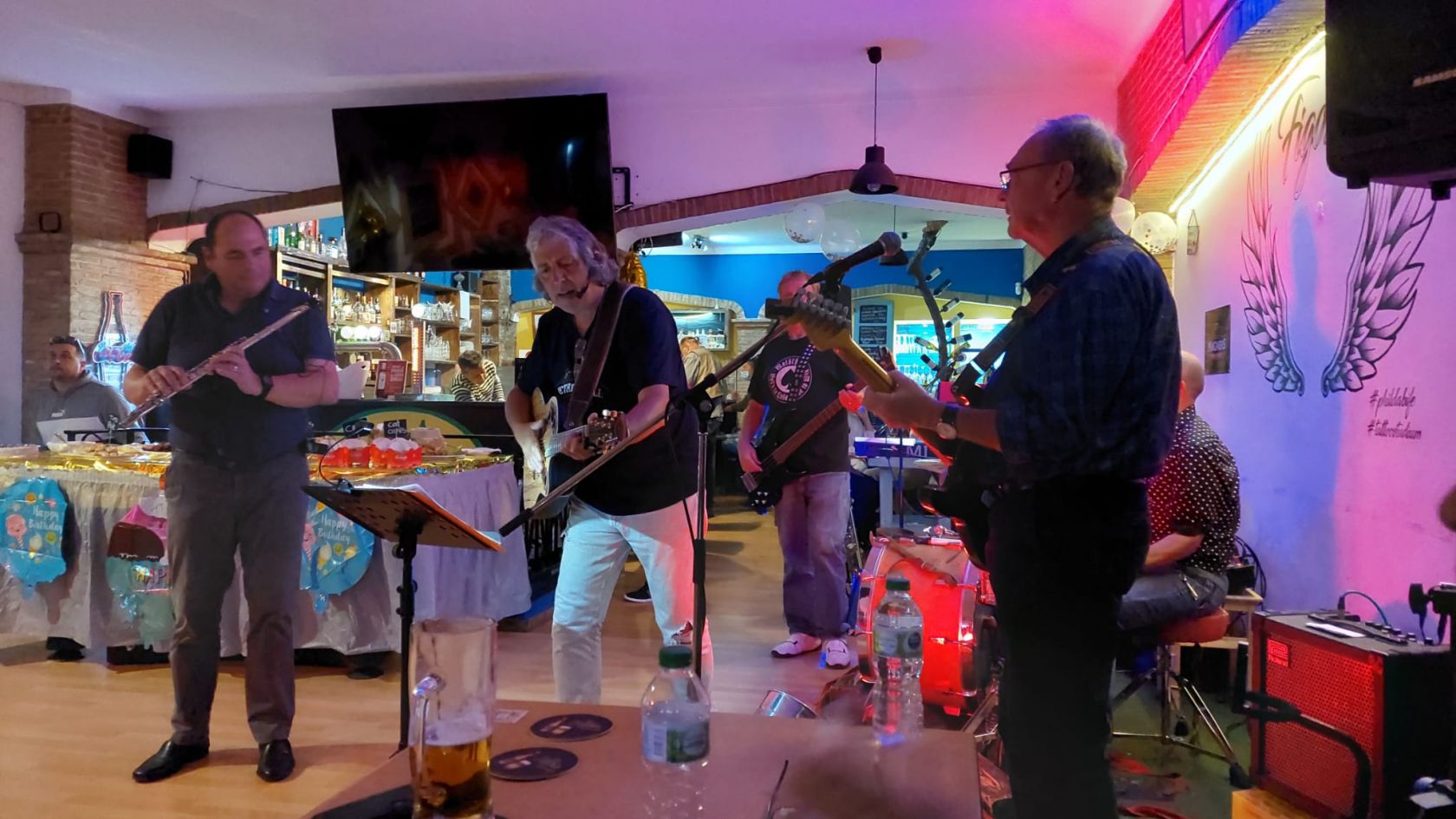 Roy told me that his career, having worked for Ben and Jerry’s for the last 21 years, took over and that he had a lot less time for music. Then Roy moved to the lovely town of Sesmarias in 2018 and he went to a jam session advertised at Carvoeiro Tennis Club where he met drummer, Stick and his wife, and joined the band as their bass player. He ended up meeting the other members at another jam session and they all started talking about the kind of music they liked to play and it all clicked together with the new name Rockhopper.

“Our connection to rock music made us all click, we all grew up with classic rock in the 60s and 70s. Over the years, we have all done all sorts of rock music, in the 80s I used to play heavy metal and punk as did the drummer but some of the other guys are more classic rock so you put it all together.”

The drummer, Stick, has been living in the Algarve for 30 years and has been professionally playing drums for 40 years so he is a really good drummer. Dave, who is the bands singer and guitarist, has lived here for over 30 years, and he is actually a builder and has been singing and playing for years. Then you have Tim, the lead guitarist, his career was in teaching, much of it in the Middle East, having retired here in 2016 and then finally Ken, the keyboard player is just a keen jammer type musician and he loves to play anything and everything. He has lived here for over 20 years and has been an IT consultant for most of his career. “We all came from different places, doing different things, playing all sorts of different things. Suddenly you arrive in the Algarve and it all gels together.” 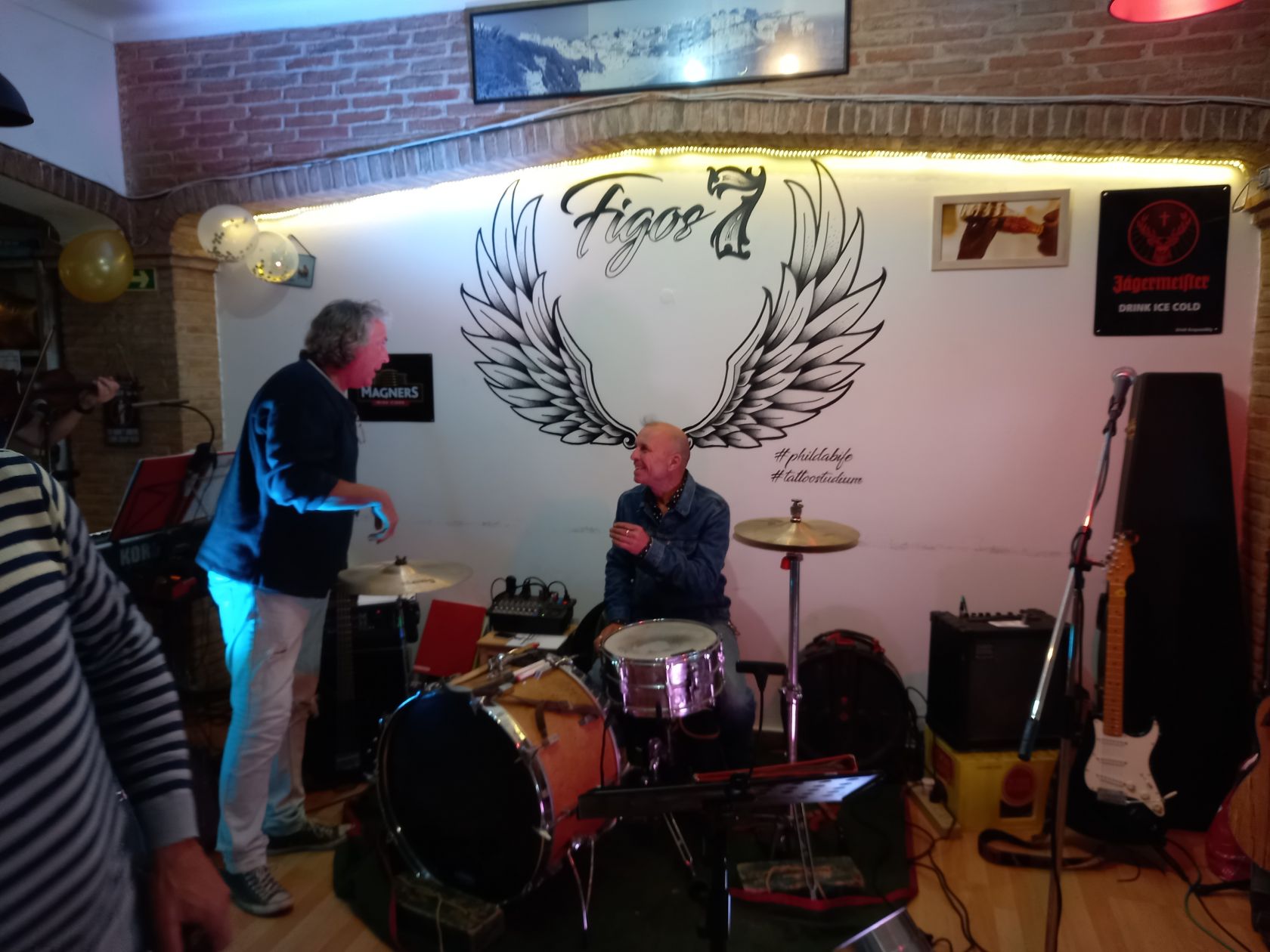 Rockhopper have a varied repertoire with over 70 covers from bands like AC/DC, Pink Floyd, Queen, Roy Orbison, The Rolling Stones, The Waterboys and The Stranglers to name a few, not to mention a couple of their own tracks which will have you up and dancing in no time. Roy told that “Some of the earlier stuff we do, you will never hear those tracks from the originals anymore because they aren’t around anymore and it is nice to keep it alive and keep it live. I’d say we are more players than artistes, for us if people are up dancing that is great feedback.”

He explained “What we like to do with some songs, is what we call, Rockhopper the song, so we do things with a touch different. For example, we might take a classic 60s song and we will just rock it up. and we might have a song from The Kinks with the bass behind it which is more like The Stranglers.”

Adding that “We try and keep the songs that we do a nice balance so there are some quieter ones and some proper full-on ones. The whole set is designed to be a little bit balanced so if somebody wants us to play quietly for the first hour, we can do that”, humorously adding that “then we get noisier as the night goes on.”

Roy mentioned one of their more recent gigs, “On 23 April we celebrated my wife’s birthday at Figos 7 Bar in Carvoeiro and that is a great little bar and it was great to play there. I wanted to give a shout out to Yvette, we had a big spread of food and lots of people came and it was great fun. What was also really nice is that she asked us to come back and perform, which we are doing on 14 May. We are even squeezing ourselves into Carvoeiro Bar at the end of the month which will be interesting for five and all the gear, but we will make it work and we have lots more planned for the summer!”

For more information, please visit https://rockhopperband.com/, where you can reach out to them for bookings and where you can subscribe to their newsletter to keep up to date with upcoming gigs. Alternatively, you can visit their Facebook page @RockhopperBand where they post their events and is another way to book them for your special event.

Music with a heart

Music with a heart

Foo Fighters cancel all concerts, including in Portugal

By Daisy Sampson, In Music

Tickets now on sale for Medieval Market of Óbidos

By TPN, In News, Portugal, Tourism, Other Events

By TPN/Lusa, In Music, Lisbon

By TPN/Lusa, In Music, Events