Somewhere under the Rainbow they are waking up and planting trees

“Nestled between the mystical Monchique mountains and the Algarve sea with 21 hectares of abundant natural surroundings, Awakeland is a place to breathe, to feel and simply be.”

Sounds like a kind of fairy tale land, doesn’t it? Well, I certainly thought so when I read that, and when I scrolled down through their Instagram posts and saw just how prone the place seemed to be to rainbows - it only served to convince me more that this was just the sort of magical place that I would like to visit.

Awakeland is a lot of things. If you are the digital nomad type looking for a peaceful place to work, then you can come and listen to the bird's tweet - and yourself think (possibly about your next Twitter ‘tweet’). But they also host and organise retreats, festivals, workshops and gatherings for things like dance, yoga, breathwork, meditation and tantra.

However, as passionate as they are about all these things, they all serve to help them with their ‘ultimate goal’, which was the reason that I became so interested in them. They are regenerating this land that was hit hard by a fire in 2016 and are planting lots and lots of trees.

I got in touch with Lakshmi, the ‘abundance generator' (great job title, right?), and she very kindly invited me around one day to meet them and find out more.

I arrived and followed a group of merry volunteers who were just getting back from some sort of tree maintenance expedition and found Lakshmi at the reception. We chatted over tea until Ashik, the founder, arrived. 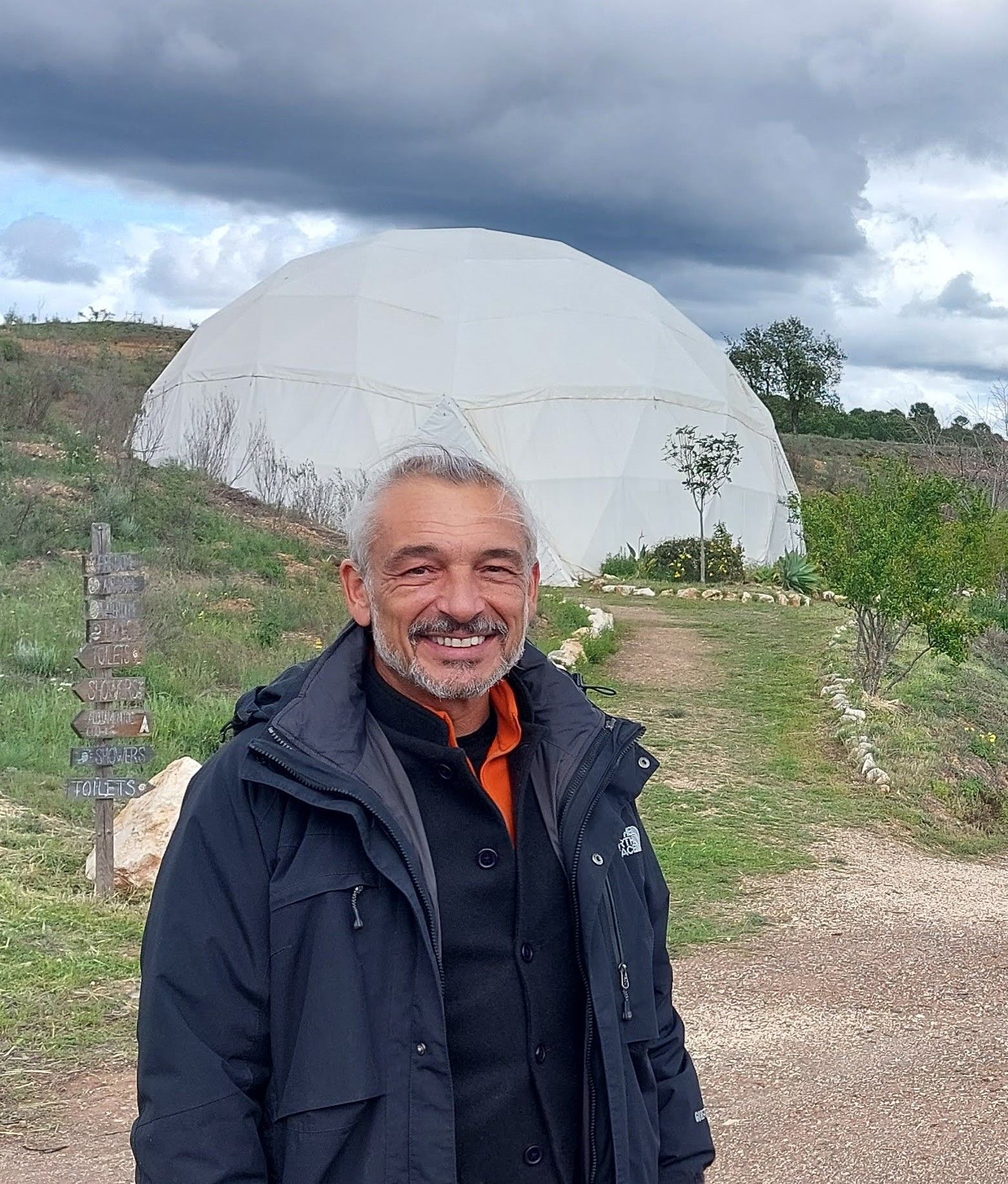 Ashik is Portuguese but has spent a lot of his life travelling. About 8 years ago, he moved back to Portugal and bought Awakeland. He leads tantra training seminars at Awakeland (and all around the world) but we talked more about the nature side of things - and you should see his eyes light up when he talks about the importance of planting trees.

Not really knowing where I was, I was very excited when Ashik said he would take me out on the tour.

We walked past the various large geometric white domes. They are called the fire, air and water-domes and are where they hold their events, workshops and even concerts.

Ashik also pointed out the ‘Wisdom Tree’ where he says they regularly gather for various ceremonies - or simply to enjoy its shade. This olive tree is the oldest tree on the land and the only one to survive the fire. This unfortunate inferno happened very soon after Ashik had bought Awakeland and wiped out most of the land's vegetation. However, like a lot of land in the Monchique area, the native trees had already been cut down to grow cereal crops and so the land wasn’t in the best shape anyway and, in a sense, Ashik said, it was lucky that the fire happened before they really got started with their reforestation project. Like a phoenix out of the ashes, it allowed them to rethink and start from scratch even more determined. 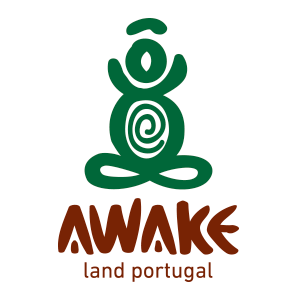 It also means they are very aware of the very real risk of fire and take lots of precautions, such as keeping the more flammable local bushes cut back, as well as carving out a fire break all around the land.

Another interesting idea Ashik showed me, that will only pay off in a few years, is that they planted cypress trees all around the border. They are one of the least flammable trees - to the point they are ‘almost’ fireproof.

Trees do talk - on the ‘Wood Wide Web’

While walking across the land, Ashik pointed down and told me that the ground was “covered in mushrooms and this allows the trees to talk to each other”. I looked down and didn’t see a single fungi. Bewildered, I asked him to explain.

Apparently, they spray the roots of the trees with a ‘mycelium mix’ to grow a type of fungi called ‘Mycorrhiza’. These fungi operate underground mostly but have the most wonderful symbiotic relationship with plants. In return for the carbohydrates that plants provide (thanks to that neat little photosynthesis trick of theirs) the mycorrhiza spreads out from the roots creating a huge underground network, finding and providing nutrients for the tree. But here’s the even cooler thing…

All these densely packed fungal threads could also be thought of as ‘fibre optic cables’ for the ‘wood wide web’. Indeed, in nature, a healthy forest is covered in them. These networks allow trees to communicate, warn each other of dangers and like good neighbours exchange resources when and where it is necessary.

The Power of Planting with Love

Awakeland has planted over 13,000 trees in the last 8 years, recently adding another 8000 to that. There’s a huge and interesting mix. The main one being the ‘medronho’ that thrives in that area, but there are also lots of fruit trees as well as a nice mix of olive, almond, carob, oak and pine.

Now, it's not often you can truly see such a dramatic example of what love can do. But Ashik pointed out an oak tree that had been planted at the same time as the ones around it - except it was far bigger than its neighbours. Ashik told me how a friend of his had taken extreme care with everything, taking ages to plant just one tree. It wouldn’t make sense to spend this amount of time and energy on every single one, but Ashik laughed and said that all these years later when it is towering over the others, you can’t deny ‘the power of love’ and how important it is - especially in the early years.

Of course, for trees you need water. Water is life after all. When Ashik first got Awakeland it had two lakes but now they have five. He also showed me how they’ve recently created what’s called a ‘biocell greywater filtering system’. This filters all the water they use in the house through a clever mix of stones, sand and even some specific local plants so that the water doesn’t go to waste and can be put into one of the lakes and used to water everything. 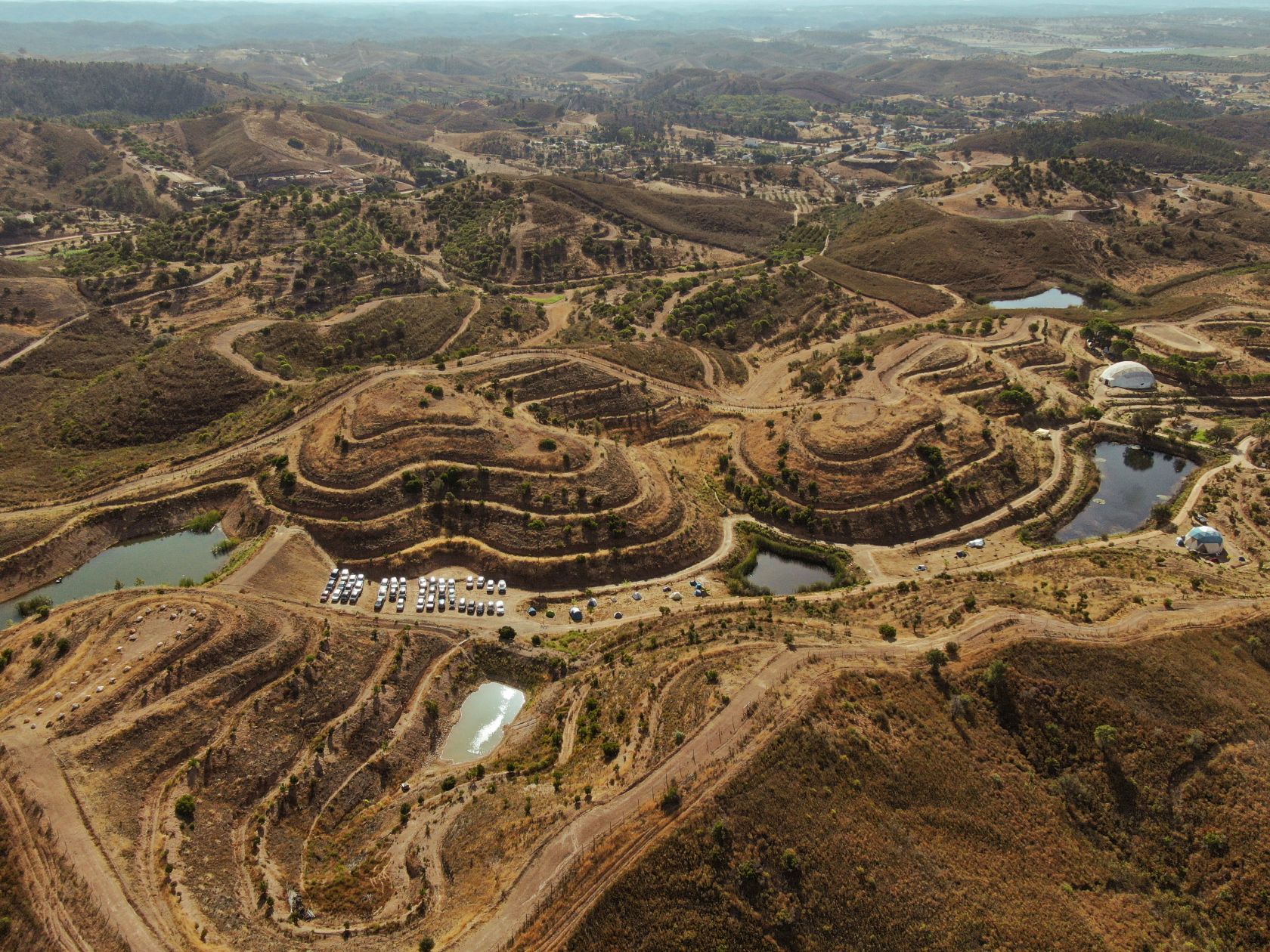 The future's so bright we’ve got to plant trees

The land is beautiful now but looking at the ‘up and coming’ trees made me just imagine what a wonderland this place will be when they grow up. This is Awakelands dream.

And so, whether you decide to come and stay, attend an event or even volunteer, you will be helping make this dream - ‘awaking reality’.

By TPN/Lusa, In Tourism, Business, Portugal

By TPN/Lusa, In Tourism, Business, Lisbon

I nearly didn´t read this 1 (advertising for fancy holidays when I can´t go anywhere, ever, for years? Understandable, right?). But then read about the trees communicating under soil, and I was so pleasantly surprised. I was told about this by a Pt University researcher/teacher years ago, and I was fascinated by this.

By TPN/Lusa, In Tourism, Business, Portugal

By TPN/Lusa, In Tourism, Business, Lisbon

Algarve looking for workers in Morocco and Cape Verde

By TPN/Lusa, In Tourism, Business, Algarve

Tourists “not concerned” about Covid-19

By TPN, In Tourism, News, World

Which airlines are cancelling the most flights?

By TPN, In News, Tourism, World

Explore the "Magic Mountains" of Portugal

By TPN/Lusa, In Tourism, Portugal, Algarve

By TPN/Lusa, In Tourism, Business

By TPN/Lusa, In Tourism, Business

“Quality” not “quantity” for Azores tourism

By TPN/Lusa, In Tourism, Madeira & Azores