HomeTravelI ignored the clichés and gave Benidorm a pop

Quite frankly, I was pretty impressed by Benidorm. By dispensing with all the usual clichés, I discovered quite a gem.

Nowadays, it's difficult to imagine that 1950's Benidorm was a humble fishing village with a mere 1,700 inhabitants.

Back in those days Spain remained under the grip of General Franco's fascist dictatorship, a regime 'Amenned' by a highly prudish Roman Catholic Church. Hardly a perfect environment to dream up the idea of developing a massive sunshine holiday resort filled with beautiful, sun tanned ladies parading around in skimpy bikinis? Never in their wildest dreams did the fishermen of 1950's Benidorm ever envisage their patch growing into such a thriving Mecca of debauchery and excess. 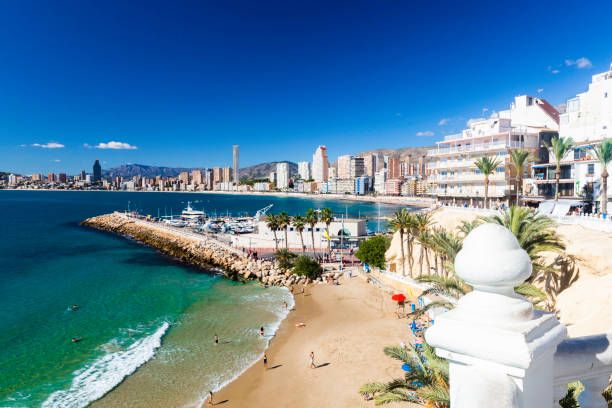 Over the last 30 years it's fair to say that the resort, as it's known today, has earned a bit of a 'cheap and tacky' reputation. But, in truth, Benidorm is a huge economic success which attracts millions of spendthrift tourists annually. You can spend your holiday as cheaply and cheerfully as you wish or if your budget extends to it, you can also live it up in luxurious hotels or swish apartments.

Benidorm has grown to be Europe’s largest resort holding the record for the most skyscrapers per capita. Such a huge abundance of accommodation (for all tastes and budgets) has made Benidorm the best value holiday destination in all of Spain. It's a one-stop-shop. Everything is here. People from every race, creed and background flock into Benidorm creating a haven of multicultural harmony. It's a playground for all generations seeking somewhere to unwind, perhaps wear some outlandish clothing and just generally have a fabulous time.

The Brits have always particularly enjoyed the Benidorm experience because of the abundance of a certain commodity that's in short supply on home territory - sunshine.

For many holidaymakers, Benidorm also provides far greater value for money than an average rainy weekend in Keswick. The presence of the Brits is reflected in the culinary scene where British taste buds are accommodated by traditional chippies, British pub-grub, Chinese restaurants, kebab shops, and UK-style curry houses. Naturally, Spanish tourists, (especially from land-locked Madrid) are equally enamoured by their flagship resort. Benidorm satisfies plenty of home-grown tourism. Spanish tastes are catered for with pop-up chiringuitos as well as lots of typically crowded Spanish standing-room-only bars which burst into life during the cooler hours after dark.

I found it quite quirky how Spanish visitors seldom venture onto the British scene nor do most Brits tend to sample the Spanish way of doing things. Despite all this, there seems to be a happy coexistence as each culture enjoys the benefits of a unique symbiosis.

Benidorm boasts a thriving international food scene with something to please all tastes. British expats who live full time in other parts of Spain or Portugal often satisfy their secret and nostalgic hankering for good old fashioned British grub by visiting Benidorm for a spot of the 'Britain away from Britain' experience. We noticed a nice looking chippy with all-day English breakfasts, bangers ‘n’ mash, kebabs, curries, fried chicken as well as traditional fish and chips on the menu. Better still, they served dinner from 5pm, which tends to be more akin to traditional British mealtimes. 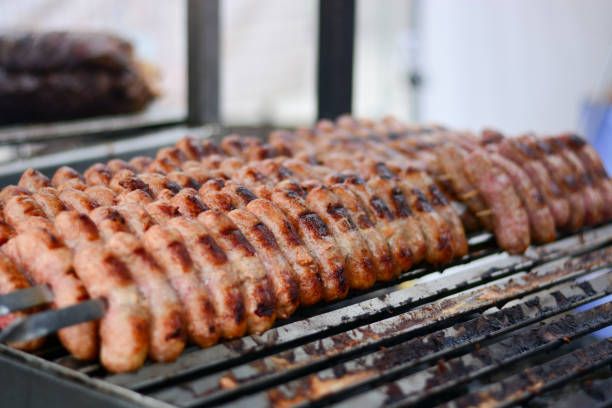 For the night owls 'Tapas alley' is well worth a visit if your delicate constitution can hack a bit of late night Spanish eating (and drinking). Every evening, Spanish people from all over the land descend upon this particular area in the heart of Benidorm’s old town. Make no mistake, it is very distinctly Spanish in this part of Benidorm and it really does 'feel' Spanish. The narrow, cobbled lane extends for about a hundred metres, transitioning from an indoor market area into the outdoor 'tapas alley.' There are around 30 specialist eateries packed along this delightful stretch of fragrant chaos and genteel merriment. 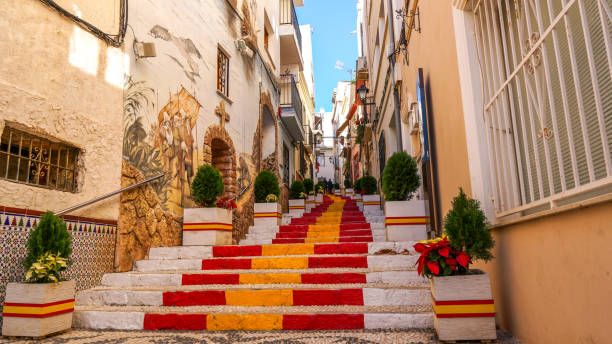 Benidorm's fusion of the old, the new, the exotic and the plain make the resort's food culture quite unique. Tapas alley and old town Benidorm are far removed from the lively ambience of East Benidorm's Playa Levante. This is another beachy area of town flanked by neon lit, 30-story hotels which cater for the package holiday brigade. There are streets and alleyways aglow with flashing billboards advertising "LIVE SEX," "SUPER STRIPPERS," or "IRISH BAR". It's all happening alongside a constant drumbeat that echoes down 'the strip' until the first light of dawn. 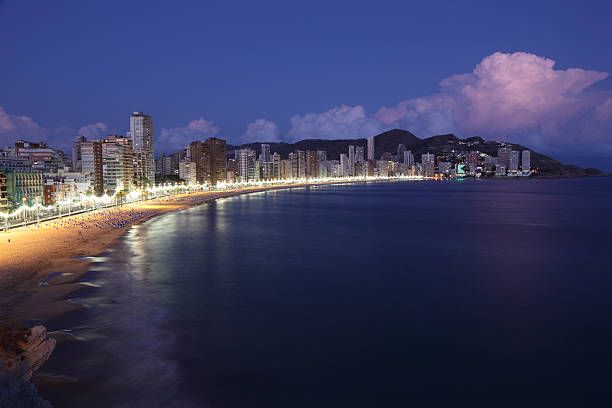 Granted, you're always going to stumble across Benidorm's fabled stereotypes at some point during a visit. But these strange creatures are totally unique. A breed peculiar only to Benidorm. They are as exclusive to the town as wild Kangaroos are to the Australian outback; as much part of Benidorm's fabric as the Colosseum is to Rome or the Eiffel Tower is to Paris. It would be a poor show not to encounter them at some point during a visit.

My top Benidorm moment was when we went for a late evening meander through the old town. It was another glorious moonlit evening as we weaved our way through the thriving tapas alley, ending up at the nearby Benidorm Castle view point. Here we found a series of tiered paved areas overlooking the bay. The stair-linked viewing platforms are flanked by beautiful whitewashed balustrades which are magnificently illuminated at night. The views of the floodlit city with its tall buildings towering above the sweeping bay are genuinely breathtaking, as impressive as any natural vista. The Mediterranean sea gently lapped the shoreline as pure white seabirds swooped and soared from craggy cliffs and rocky ledges that loom-large above the vast sandy beaches below, their plumage occasionally catching the floodlights as they take to the night sky. 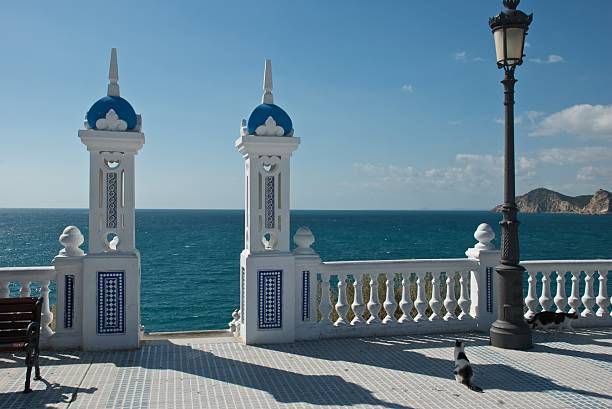 You won’t find anywhere else quite like Benidorm. Beer bellies and bathing beauties routinely share the same stage. Gangs of lads and lasses alike are out and about looking for an impromptu party to join. Style? Well, that's whatever you want it to be. There's no room for any shallow pretentiousness in Benidorm.

Over the years, Benidorm has taken a lot of flak. But it is what it is and its success means that it can quite easily afford to be wholly unapologetic. Yes, there will always be some coarse nightlife about town but that's exactly what seems to be desired by lots of Benidorm’s visitors. Our off-peak visit in April meant that we got to enjoy the fine Mediterranean climate and witnessed the more genteel side of the old town. It was bustling but far from overcrowded.

Benidorm has become a world renowned cultural phenomenon in its own right. All the returning trade clearly demonstrates that it's absolutely treasured by millions. If you cast aside all the stereotypical imagery and plan a visit that suits your personal tastes and preferences, this town will deliver. Benidorm is well worth seeing with your own eyes. I rather suspect you'll enjoy it just as much as I did.

By PA/TPN, In Travel, Tourism, Community

By Advertiser, In Travel, Company News

Which are the highest paid professions in Portugal?

By TPN, In News, Business, Portugal

By TPN, In Property, News, Portugal

Are you ready to hit the slopes?

By Jake Cleaver, In Travel, Lifestyle

By TPN, In Travel, Lifestyle