HomeEventsOutstanding in the Field set up a table at Nazaré

Outstanding in the Field set up a table at Nazaré

The city of Nazaré, in the district of Leiria, hosted the event Outstanding in the Field on 4 July.

The dinner was organised by the American company of the same name, with people from all over the world gathering together to celebrate local cuisine.

Outstanding in the Field has been offering gastronomic experiences around the world since 1999 and debuted in Portugal, by the sea in Nazaré, a city known for its great waves and surfers. 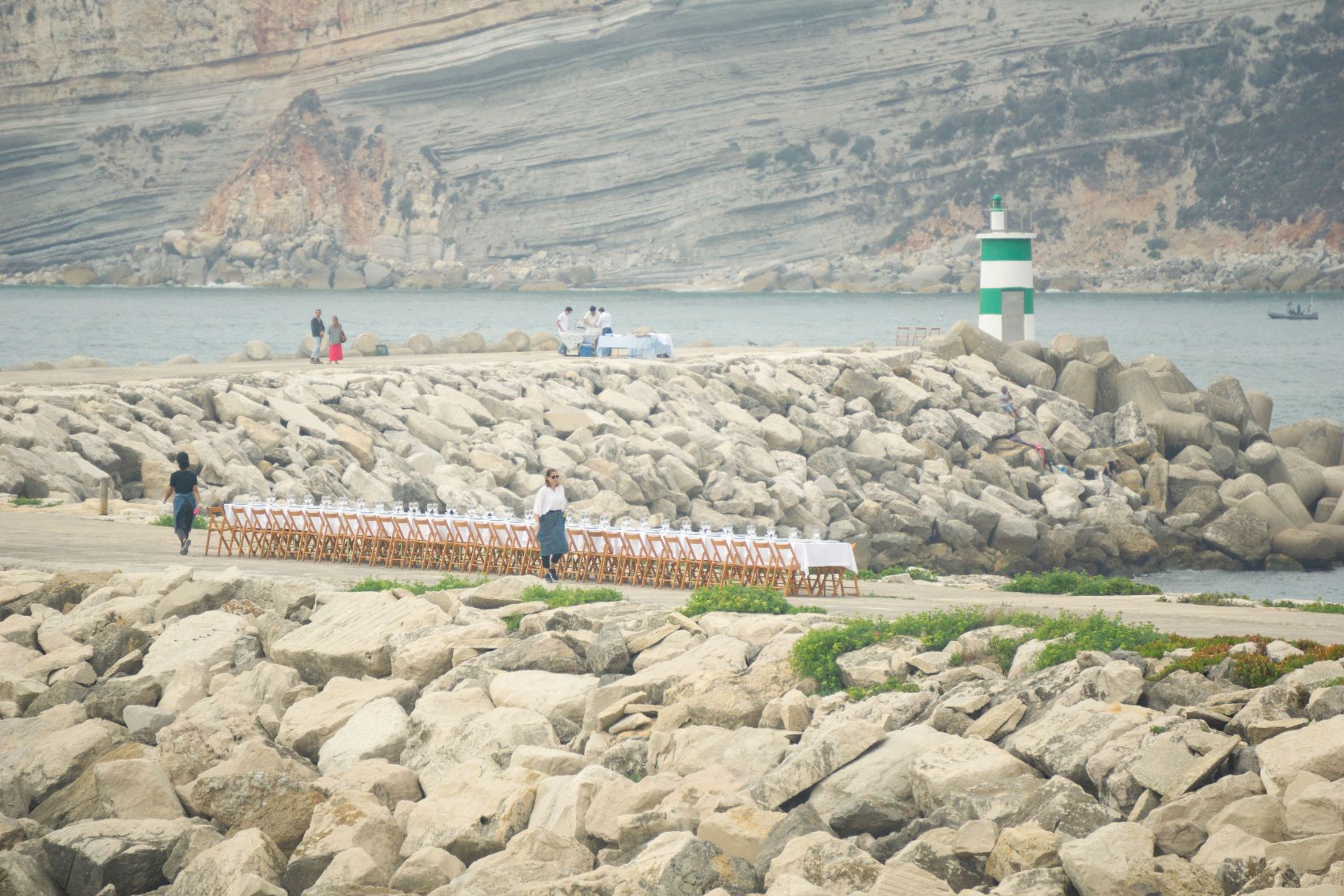 The table is one of the most important features of the event, as it is where everything happens. In Nazaré, the table was set up on a jetty, in Docapesca, close to the Nazaré Harbour.

Passing through the exterior kitchen, with a warm and cheerful welcome from all the employees present, a welcome drink was waiting for the guests near the lighthouse, a little away from the table. 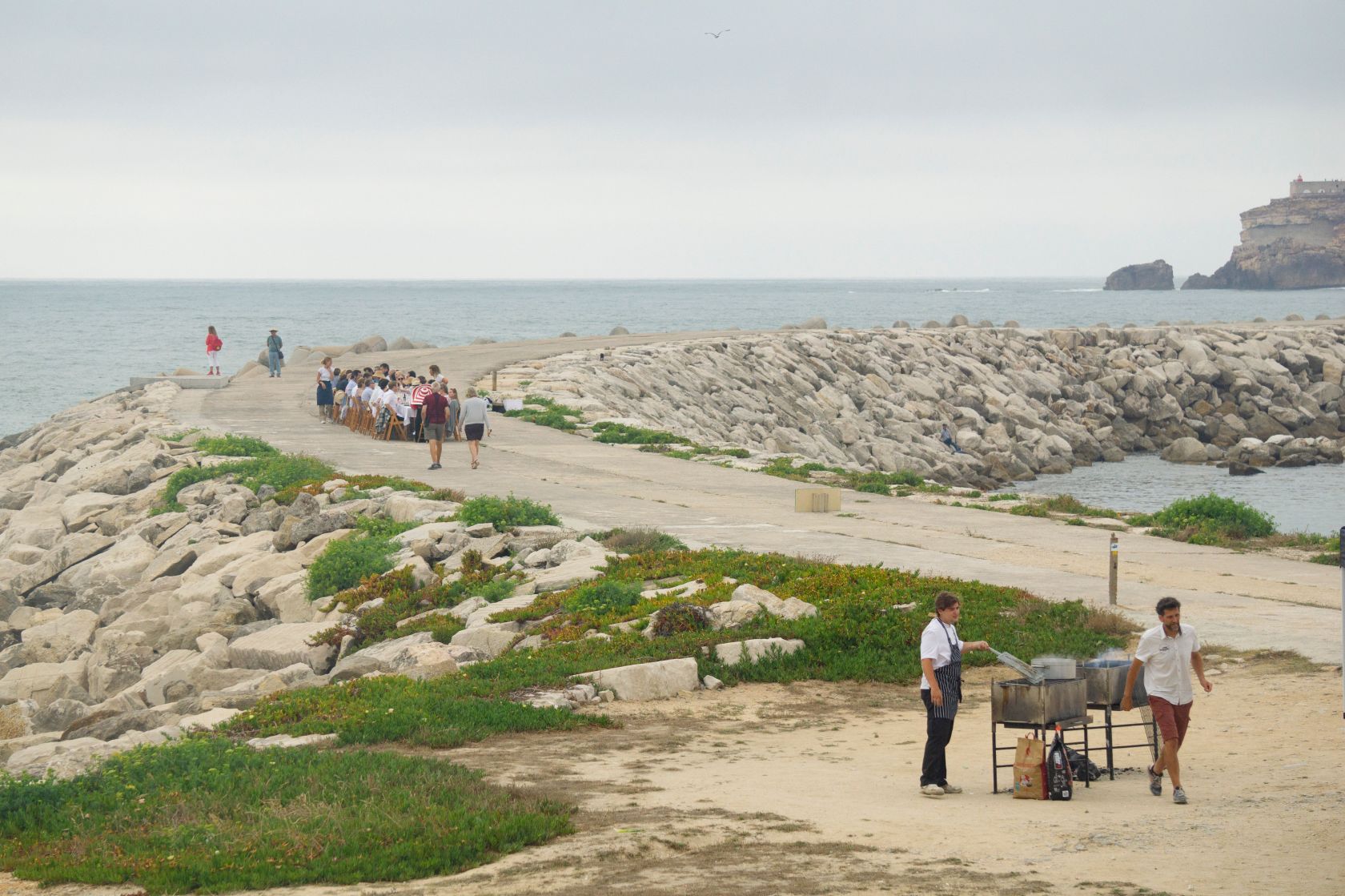 Everything served was produced by local producers, as such, for the welcome, guests could taste Portuguese wine and beer. The muggy weather called for a cold beer, and I tasted one of Ocean Beer's three qualities of beer, produced in Sagres in the Algarve. There were three varieties of beer available: Ocean Beer Surfer IPA, Ocean Lager and Ocean Gourmet. I tried the Ocean Lager, which mixed very well with the flavours of the canapés that circulated before the main event began.

Simply Sebastião was in charge of the food, who told The Portugal News that he already has more than two decades of experience in the field. The cook from Carcavelos prepared for the starters codfish cakes with Noori seaweed, sardine pâté with red onion confit, and two different pies, one with chicken and the other with tomato and mozzarella and beetroot hummus, served with nachos. Onions and beets were supplied by Quinta do Arneiro. A highlight of the starters was the sardine pâté, which suited the weather and the drinks available for the start of the event perfectly. 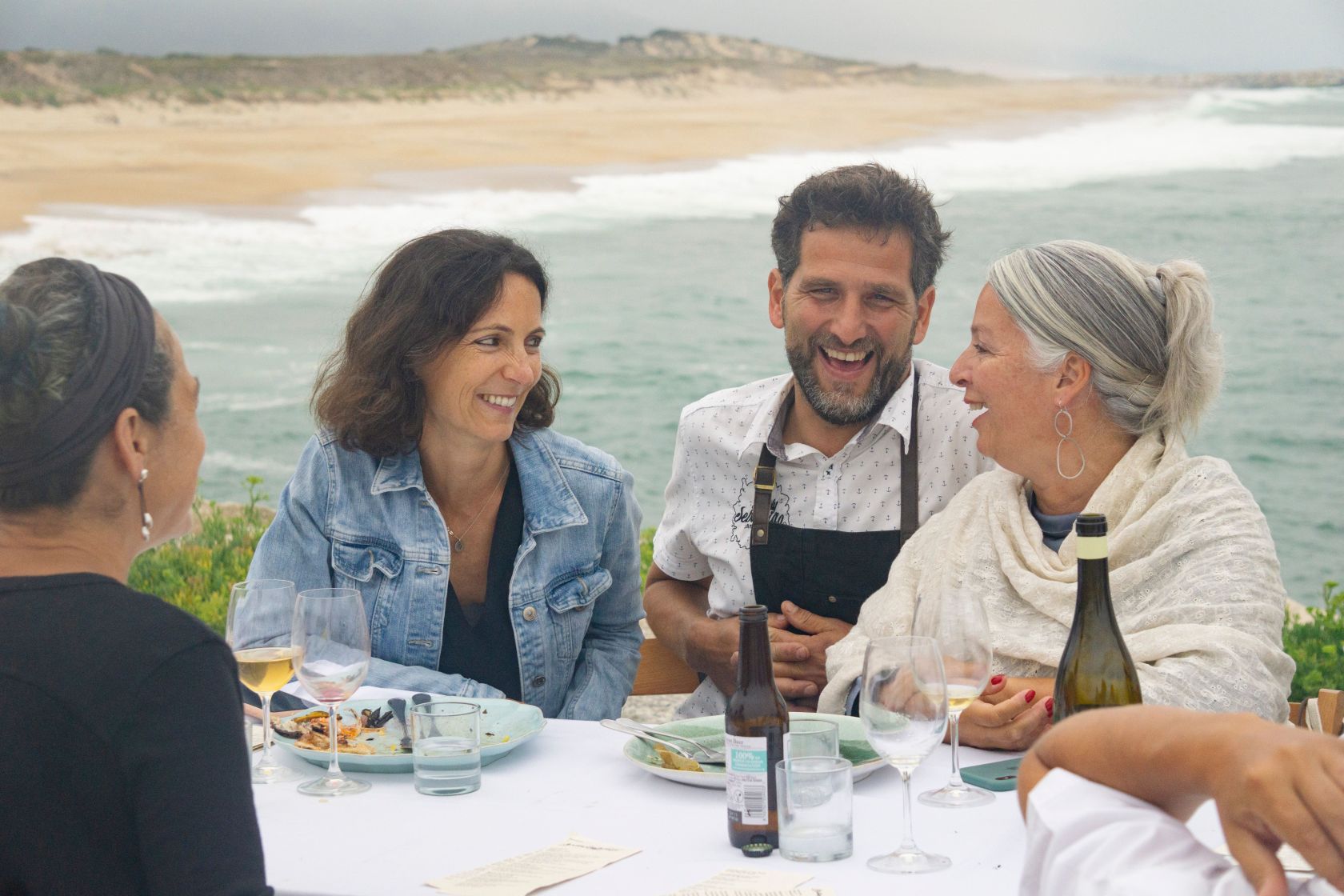 After welcoming speeches, with the organisation and producers in attendance, it was time to head to the table and feel what Outstanding in the Field is all about. The places were random, and the objective would also be to socialise and meet new people and have new experiences.

I sat in my seat and the conversation with the other guests flowed. A question here and there, I noticed that most people use the event as a pretext to travel. The table is set up in various locations around the world and offers meals made with local products, thus establishing a form of gastronomic tourism. I sat next to North Americans, Portuguese, Dutch and British people.

Sitting at the table, typical Portuguese starters arrived. Olives, bread and cheese. Several varieties of bread were presented: Alentejo bread, Mafra bread and cornbread, to accompany the goat cheese, which was served in three different stages: buttery, new and old.

After a few minutes, the first main meals began to arrive. One aspect that I found quite curious and interesting was the way the food was served. Instead of a normal platter, everyone had their plate already laid out on the table and platters arrived at the table and each one had to serve himself. The same dish was used throughout the event, which for me was an important feature. Since Portugal is going through a period of extreme drought, the fact that we always used the same plate and glass may guarantee a saving of water resources that the environment is grateful for. 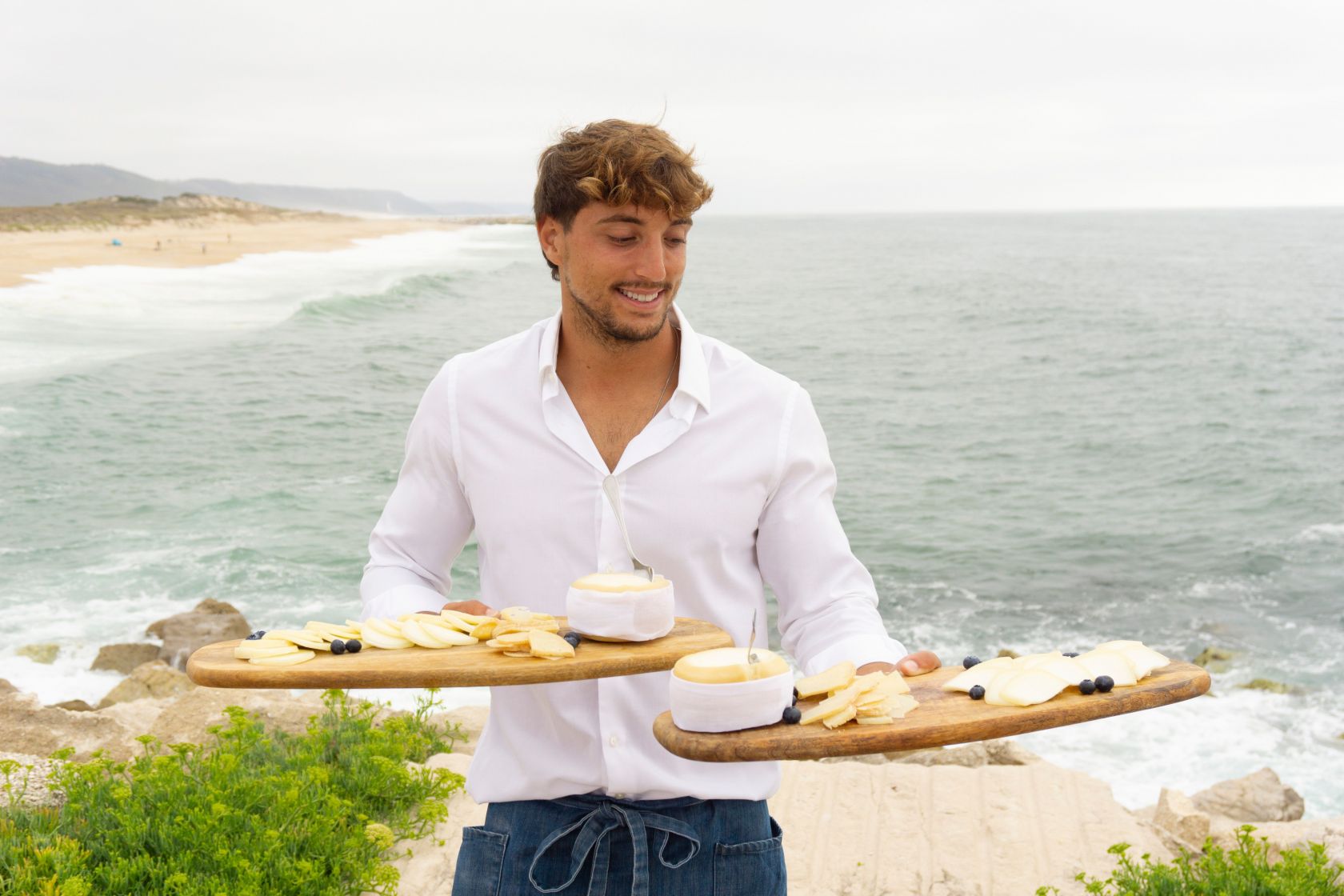 The first dish served was a grilled squid salad with chilli. Served on a platter with a 'bed' of lettuce, the squid was accompanied by beetroot and radish, which gave a very interesting mix of flavours. The sweetness of the beetroot, with the acidity of the radish, combined perfectly with the smooth flavour of the squid that was grilled to perfection, maintaining the smooth texture of the mollusc served.

All dishes were served with a different wine, with the squid one of the wines called Vale da Capucha, from the year 2017, called Fossil Branco, due to the presence of fossils in the soil of the vineyards. A white wine with a mineral flavour, a little aromatic on the nose that left a dry aftertaste was all the salad asked for to please the palates of those present.

The second course was my favourite of the entire event. Algarve clam rice was served in a bowl of considerable size. Sebastião advised those present to eat the dish while it was hot. In my opinion, it was also a way to ensure that the sauce was not absorbed by the rice, so that we could enjoy it afterwards with some bread, in the Portuguese style. The flavours of the sauce were all interconnected, guaranteeing an explosion of flavours, with the freshness of lemon and cilantro, a flavour well known as that of the clams à bulhão pato that can be eaten at a seafood restaurant by the sea in the Algarve. Served with a Vale da Capucha Aravão, from the year 2017, it was without a doubt one of the best parts of the experience.

I must also highlight the third dish, sea bass caught the same day, by a local fisherman. It is not common to be able to eat sea bass and I must say, it is the most pleasant way to enjoy this fish.

Dessert time was enjoyed by everyone. Especially when the sponge cake from Alfeizeirão arrived. As a joke, one of the Portuguese guests said that no one would like dessert, as she served a little on the plate of each one with whom she shared a table. What is certain is that everyone went back for seconds and we were wishing for another piece of sponge cake, which was accompanied by the sweetest strawberries I have ever tasted, produced at Quinta do Arneiro, in Mafra.

Dinner started at 6 pm, which is not common for Portuguese people, but the conversation and the whole atmosphere allowed the experience to go on until after 9 pm. In the end, I had the opportunity to speak with one of the organisers, Seth Heitzenrater. 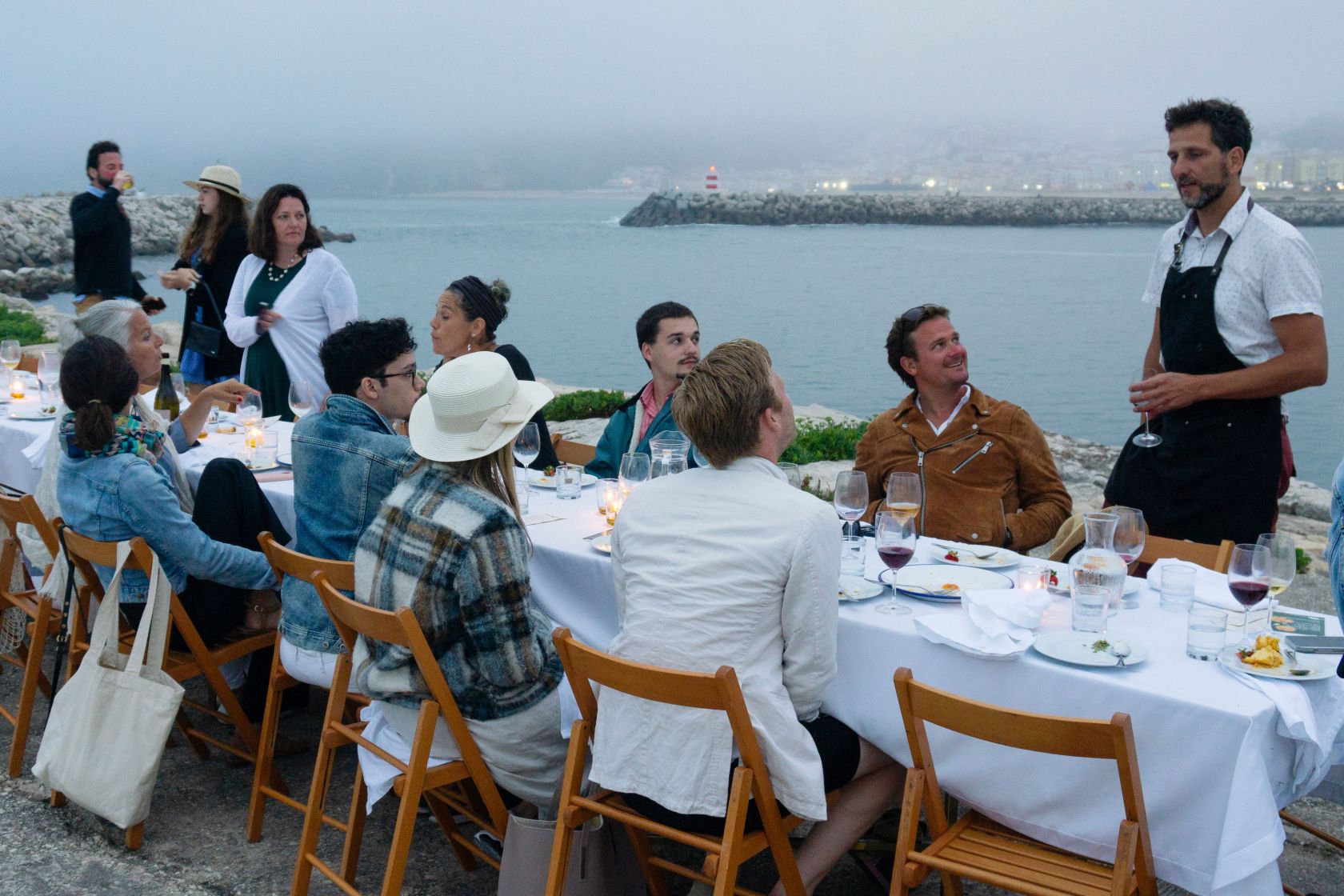 Outstanding in the Field set up a table at Nazaré