The STO is a hardened, more focused version of Lamborghini’s Huracan supercar. Jack Evans finds out what it’s like to live with.

Lamborghini isn’t known for its shy and retiring nature. The brand’s created some of the most outlandish and awe-inspiring supercars around over the years, destined to be poster stars for car enthusiasts around the world – and the Huracan STO aims to be next in that star-studded line-up, bringing both huge thrills and looks that will turn heads wherever it goes.

But dynamically, can this latest Huracan edition stand up to the test?

The Huracan STO – which stands for Super Trofeo Omologata, or homologation – is essentially designed to be a road-going version of Lamborghini’s Huracan Super Trofeo Evo race car. Acting as the most hardcore car in the firm’s Huracan line-up, the STO is lighter than the standard car – mainly thanks to the removal of its all-wheel-drive system – while a wide track, stiffer bushings and more downforce ensure that this is a far more serious beast. The cabin has been stripped out too, though thankfully some creature comforts, such as air-conditioning and Apple CarPlay, remain.

Central to the Huracan STO is its 5.2-litre naturally-aspirated V10 engine. At 631bhp, its output is mightily impressive, while its accompanying torque figure of 565Nm isn’t to be sniffed at. Flat-out, you’ll get from zero to 60mph in just under three seconds before hitting a top speed of 193mph. Serious, it definitely is. Power goes to the rear wheels alone via a seven-speed dual-clutch automatic too.

Thankfully, Lamborghini has also seriously upgraded the braking system, equipping Brembo’s CCM-R set which takes learnings from F1 and brings them to the road. Though it can be easy to be swept up by the V10 engine barking away behind you, the brakes are one of the stars of the show with the Huracan STO. 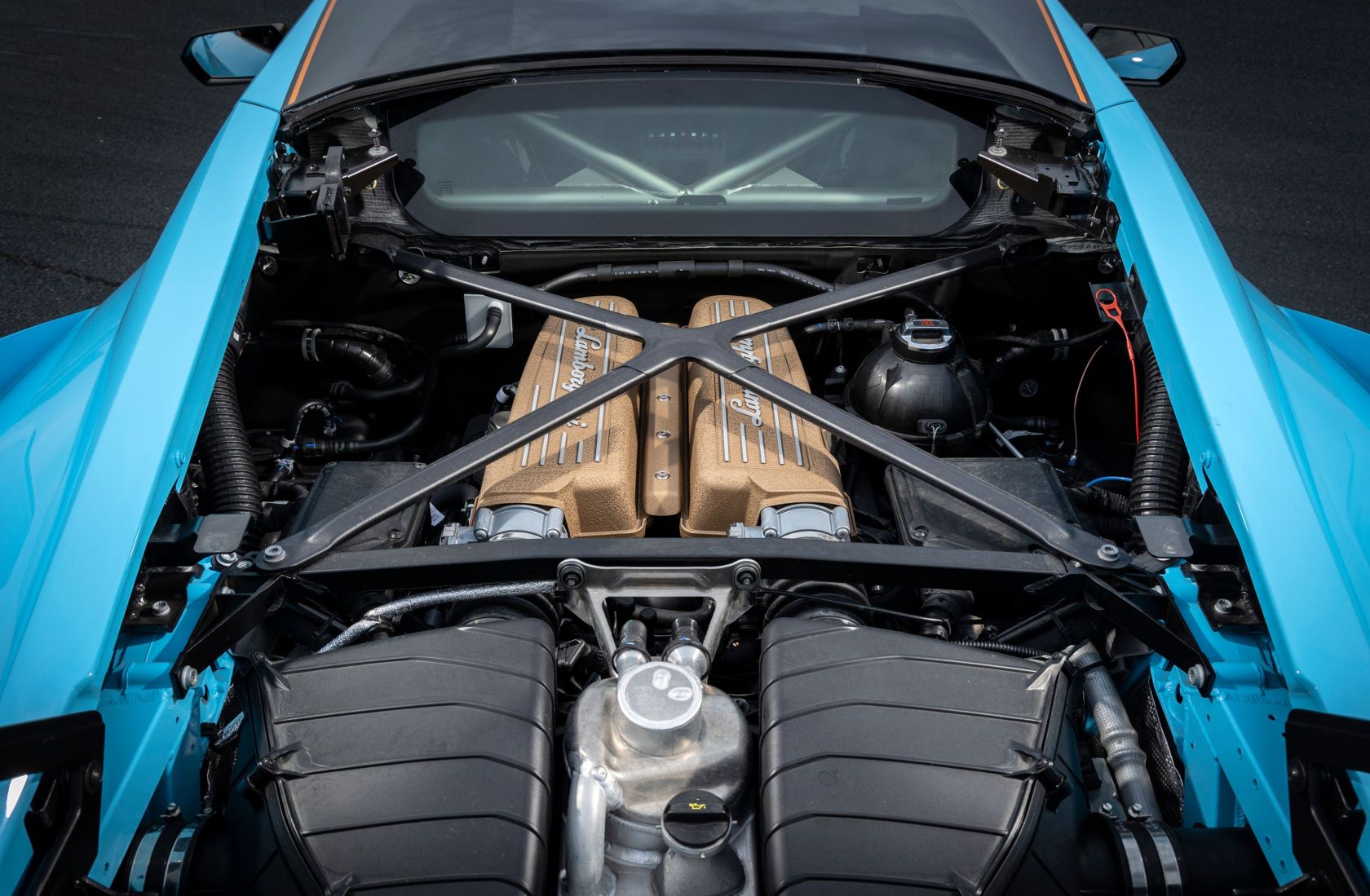 Slot yourself into the STO’s deep bucket seats and you’re faced with a variety of buttons all located on the steering wheel. A lack of stalks means aspects such as the full-beam and wipers are all accessed via toggle switches on the wheel itself – and that, initially, is what you get used to. But all of this quickly slips into the background once you start to gather a bit of pace with the STO.

It’s an all-encompassing, immersive experience. The steering is surprisingly light – much lighter than with many of the STO’s rivals, in fact – but it does mean that the whole car feels agile and sharp.

The body control is exceptional, with next to no sideways motion when heading through corners. As mentioned, the brakes are a real highlight; they’re superbly progressive and easy to manage but deal out a huge amount of stopping power as and when you need it. The engine sounds relatively muted at lower revs, but increase that throttle pedal travel and the V10 soars into life with an addictive howl. There’s also next to no rear visibility, with the engine cover and huge rear wing meaning you’ve got to rely on the mirrors instead. 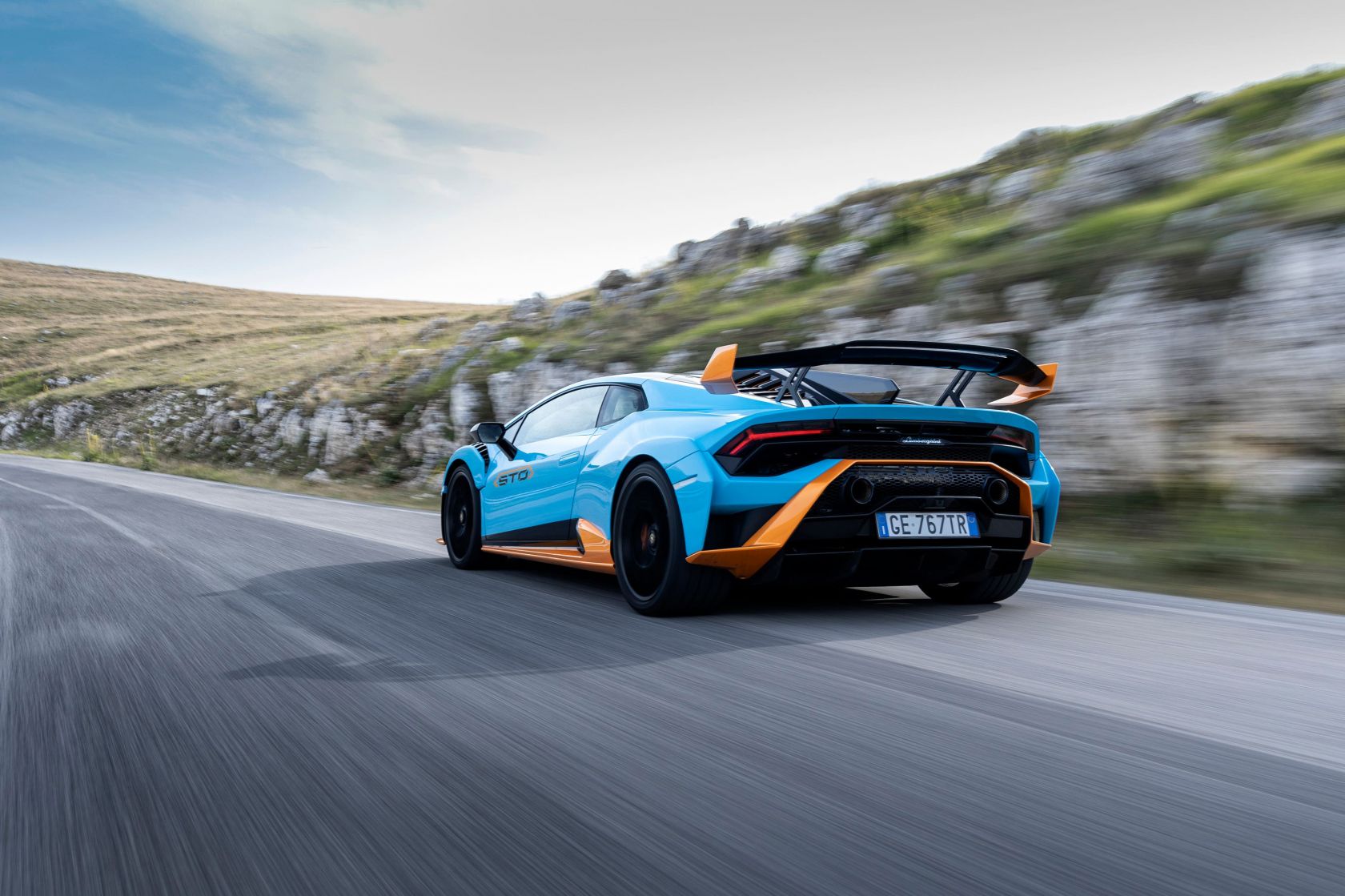 Well, you can’t say that the STO is boring to look at. With its huge rear wing, roof-mounted air duct and variety of decals and designs, this is one Huracan that goes above and beyond when it comes to visual excitement. Our car was particularly lively in the styling department courtesy of lime green exterior paint with contrast red highlights.

But then, it could be argued that this is what you want from a Lamborghini? They aren’t cars designed to be shy and retiring, but to be examples of out-there design and styling. To our eyes, the STO looks spot-on and nails the usual Lamborghini brief.

As mentioned, Lamborghini has stripped out a huge amount of weight from the Huracan’s cabin in its STO transformation, but that doesn’t mean it lacks that ‘special’ feeling – quite the opposite. There are vast swathes of Alcantara used throughout, while the fighter plane-style toggle switches and huge red starter button do mirror the drama of the exterior design.

The bucket seats have a decent amount of adjustability to them, while the driving position, in general, is excellent. It’s also best that you pack light if you’re travelling in the STO; there’s barely any extra space in the cabin, while the front clamshell – which is opened via a special key – opens to reveal only enough room for a single helmet. 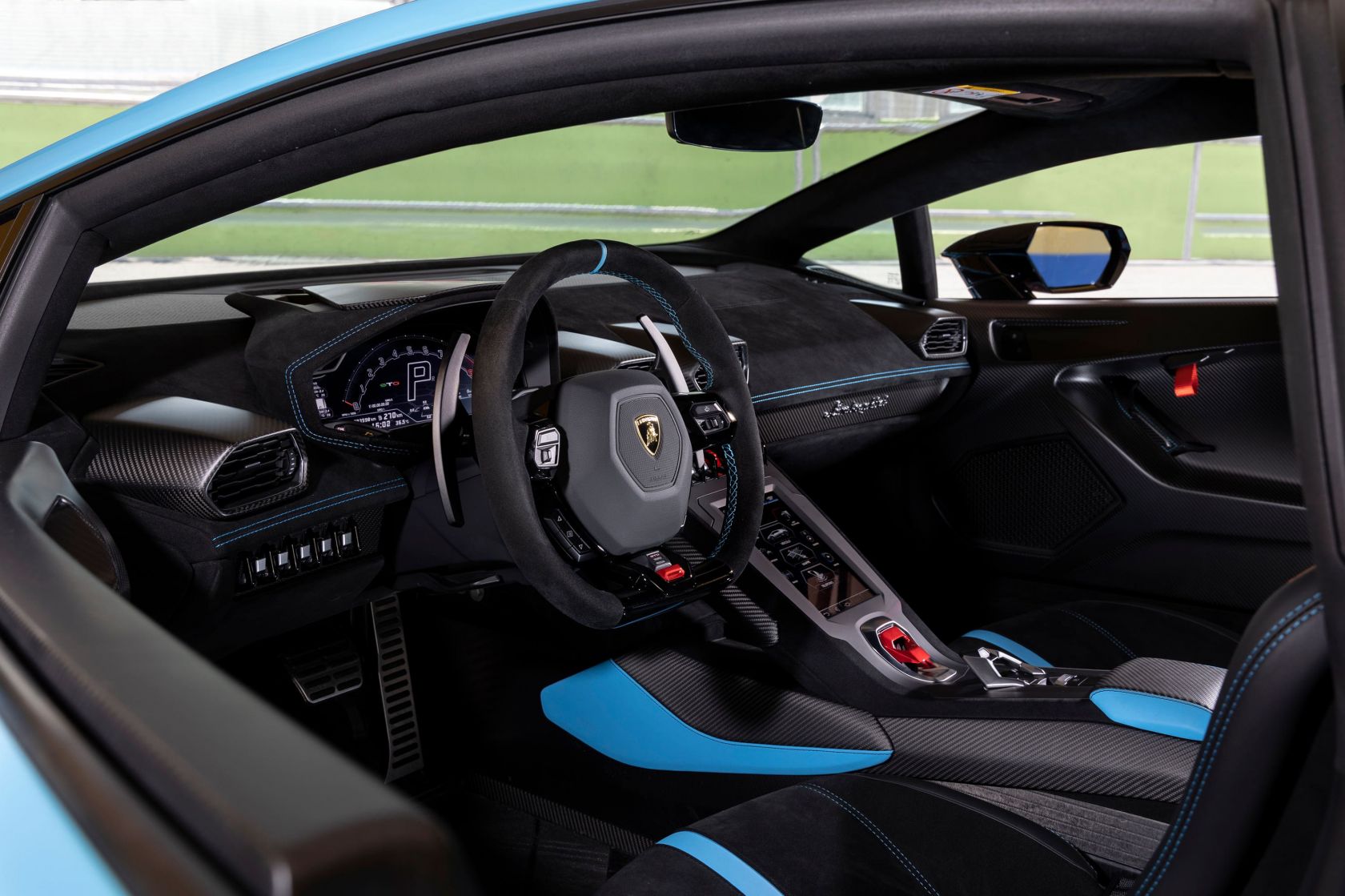 Though the STO is based around out-and-out performance, there are a number of features included to help keep those drives between circuits a little more pleasant. There’s a large central screen, for example, which houses navigation and media functions. Though it does look good it’s dizzyingly complicated and menu-heavy, with even aspects such as changing the fan speed made into a far more time-consuming process than you’d ordinarily think.

It’s common for car manufacturers to roll out the ‘race car for the road’ saying whenever they release a new lightweight model – and not all live up to this claim. However, the STO genuinely feels like the real deal, bringing that track-focused ability that you’d expect from something that has been unashamedly honed to go as quickly around a circuit as possible. 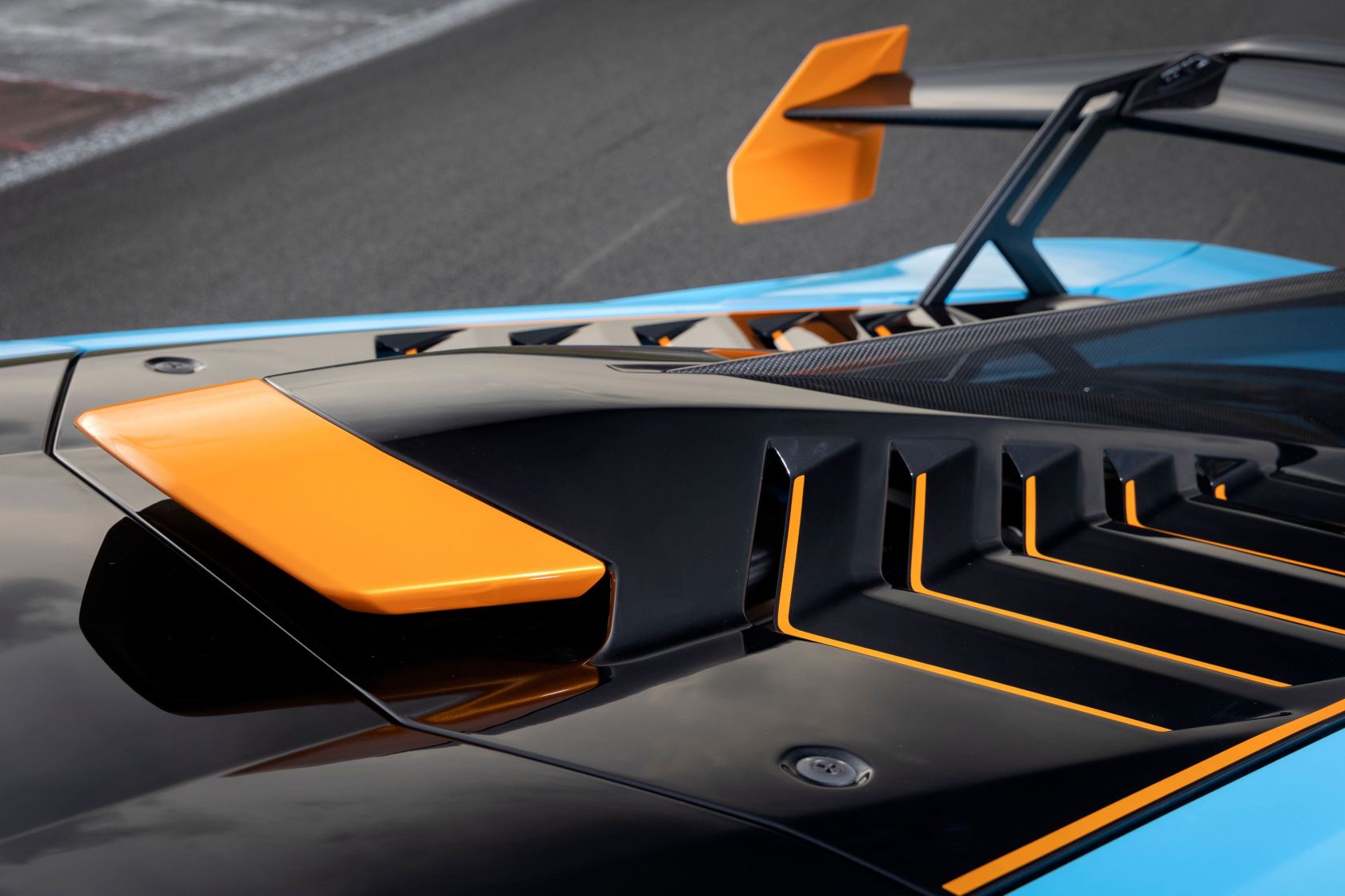 But it’s still a hugely rewarding road car. Uncompromising, yes, but rewarding. Though it’s easy to judge this car as simply a huge-wing head-turner, the STO is far more than just that. This is a Lamborghini which backs up its look with as dynamic and involving driving experience as you’re likely to get.

What are the most popular types of houses in Portugal?