“Not all issues have yet been resolved, but the fact that there is movement is already good,” said Russian President Vladimir Putin in Tehran on Tuesday.

“We feel that incrementally, there’s been a little bit more progress made, but there’s nothing to announce at this stage,” said Farhan Haq, spokesman for United Nations Secretary-General António Guterres.

It could be good news, although unfortunately not news of a ceasefire in Ukraine. Both men were talking about a deal to let ships take out the 25 million tonnes of grain that is trapped in Ukrainian ports by the Russian blockade.

There won’t be dancing in the streets in Kyiv about this, but there could be some dancing in the several dozen countries in the Middle East and Africa that have been facing the threat of mass hunger, in some cases even famine.

Egypt, for example, is the world’s biggest wheat importer. It grows less than half the food it eats, and about 80% of the grain it imports to cover the shortfall comes from Ukraine and Russia. However, none of the Ukrainian grain has been getting out for five months now, and the price of bread in Egypt is climbing fast.

It’s also a serious political problem: high food prices twelve years ago triggered the anti-regime riots that led to the ‘’Arab Spring’, the overthrow of the Mubarak dictatorship in Egypt, and various second-order effects like the Syrian civil war. But the biggest impact of closing the Black Sea to Ukrainian grain exports is humanitarian.

Normally, Ukraine’s Black Sea ports export five to six million tonnes of grain a month, but most are now under Russian occupation and the biggest, Odesa, has been blockaded by the Russian navy for five months.

“Before the war, more than 90% of Ukrainian agrifood export was done by sea,”said Mariia Didukh, director of the Ukrainian National Agrarian Forum. Ukraine is trying to get some of the grain out by rail and road, but “by railway or trucks it is very expensive, it is longer, and very, very small capacities.”

In fact, Ukraine is only getting one-fifth of the normal monthly amount out. It can’t expand the rail route because the country’s rail system uses a slightly wider gauge than its western neighbours, Romania and Poland. It would take 9,000 trucks a day to do the job, and the grain they delivered would be very, very expensive.

So reopening the Black Sea to ships carrying Ukrainian grain is not just a local issue; it is an international priority. On the reasonable assumption that the war is not going to stop any time soon, what are the requirements for opening up a safe corridor across the Black Sea from the Ukrainian coast to the Turkish Straits and the open Mediterranean? 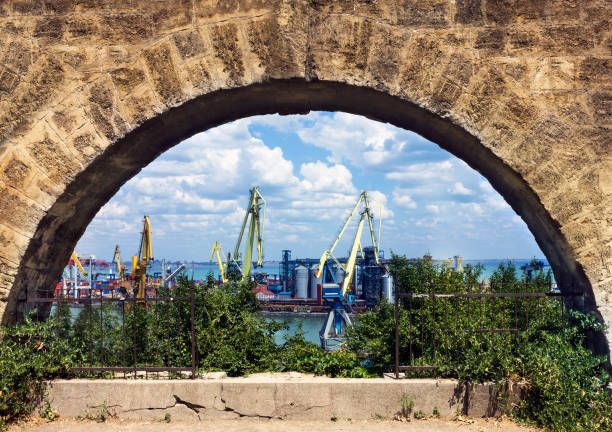 It would take around 500 big bulk cargo vessels to deliver that blocked 25 million tonnes of grain to its destinations. The remaining Ukrainian-controlled ports – Odesa, Yuzhne and Chornomorsk – could just about handle it, but it would take at least a month to bring those ships into the Black Sea and set the operation in motion.

It would take at least that long to clear the mines that have closed Ukraine’s ports and to set up ‘protected’ corridors across the Black Sea. (The Turkish navy would presumably provide the protection, but the Russians would want to check incoming ships for clandestine weapons deliveries).

There would also have to be special ‘war insurance’ for those 500 ships – and it would need to be a continuous high-volume operation, because the next Ukrainian grain harvest starts late next month and the grain elevators are still full with last year’s harvest.

This year’s harvest is down by 35% (the eastern part of Ukraine’s wheat belt is within range of Russian artillery and rocket fire), but if the silos are not emptying soon a substantial part of it will just rot in the fields.

That’s why “not all issues have yet been resolved,” as Putin put it on Tuesday, but he does seem to want to make it work. So does Turkey’s President Recep Tayyip Erdoğan. Neither man is best known for his commitment to humanitarian values, but neither man wants the blame for letting millions of people starve.

It really is that serious. Arif Husain, chief economist at the UN World Food Programme, says that the war has more than doubled the number of people in ‘food crisis’ to 345 million, of whom 50 million are “one step away from famine.”

It’s not yet a done deal, but Turkish defence minister Hulusi Akar said on Tuesday that Russia, Ukraine, Turkey and the UN will sign an agreement this week setting up a grain exports corridor across the Black Sea and creating a coordination centre in Istanbul. It may actually happen.

History teaches us that economists learn nothing from history

Is Putin Bluffing About Nukes?

I read Pt News disclaimer at end of article. That said, it is shocking that the consequences for the poor ppl in Syria are described here in this context as “second order effects”. This is why I have more respect for the Syrian ppl than the Eastern Europeans. Oh, the callousness and arrogance. But it´s not just here, which is what makes it so pernicious and exhausting.

History teaches us that economists learn nothing from history

Is Putin Bluffing About Nukes?

Calls for sanctions against Russians with Portuguese nationality

Sustainable support programme for the Arts

Economics vs the laws of unintended consequences

In Defence of Whistle-Blowers (and Donald Trump)