HomeCuriosity Do you know your Mongoose from your Meerkat?

Only one of them can be found in Portugal!

Mongooses and Meerkats both belong to the family herpestidae but the Mongoose (known as a mangusto in Portuguese) is the only one you are likely to see here in Portugal.

They are long, furry creatures with a pointy face and a bushy tail and are not rodents, but a carnivore. (For those interested, the correct plural of ' mongoose ' is not 'mongeese' but ‘mongooses '. The reason? The two words mongoose and goose have completely different origins, and therefore different plurals.)

The Egyptian Mongoose is confined to southern Portugal and is a species native to the coastal regions along the Mediterranean Sea between North Africa and Turkey, and Africa.

They move at a brisk gallop or a low slink and are not easily seen as they make use of dense cover. Whether they were introduced or native to the Iberian Peninsula is in some doubt according to Wikipedia.

Some are solitary for nearly their entire lives, and others live in large groups, which are known as packs, mobs, or colonies, depending on the species. Often, large packs can number up to 50 individuals, and in large packs, group care of the young is often seen.

Humans have long admired mongooses for their ability to kill venomous snakes. This trait was also famously dramatized by Rudyard Kipling in his 1894 story "Rikki-Tikki-Tavi," in which a mongoose saves a human family from villainous cobras.

They are formidable opponents for snakes largely due to their speed and agility, which helps them launch quick attacks when they sense an opening. But some species also have an extra advantage - they've evolved a resistance to snake venom, allowing them to keep fighting even after receiving a bite that would kill most animals their size.

They are not immune to the venom, but thanks to special mutations in their system, the neurotoxin has difficulty binding to their nicotinic acetylcholine receptors, rendering it less effective.

They are mature between 9 months to 2 years of age and live from 6 to 10 years in the wild. They will stand erect to look around for danger, which brings us to Meerkats, almost instantly recognised by their ‘sentinel’ guarding behaviour.

Meerkats (in Portuguese, suricata) live in all parts of the Kalahari Desert, in much of the Namib Desert and south-western Angola and in South Africa, and they are the sole member of the genus Suricata, a weasel-like animal that are also part of the mongoose family.

We know quite a bit about these cute creatures, thanks to nature programmes where their lives have been documented in detail, and a certain TV ad features them, which has made them instantly recognisable.

The sentinel role is performed by a helper or a non-breeder, and having remarkable eyesight, he or she is on the lookout by constantly watching for possible predators and potential threats while the group is away from the burrow, and will sound the alarm by producing a distinct bark. This position rotates amongst different members of the group in no particular order. 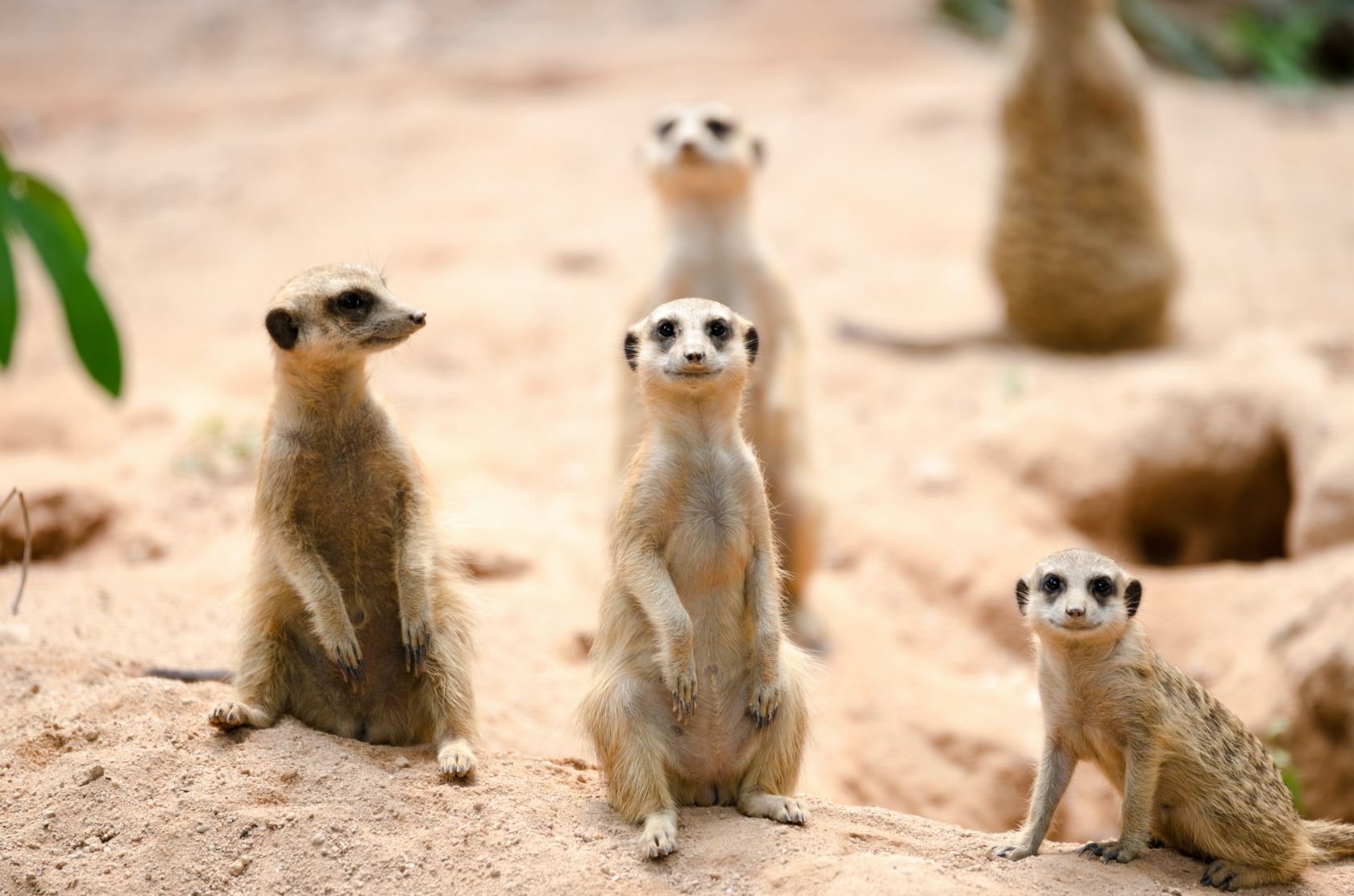 They are smart too. A study at St Andrew's University, Scotland, found meerkats use complex coordinated behaviour, which rivals that of chimps, baboons, dolphins and even humans. They solve tasks with help from their ‘mob’ but also through independent thought, and the study saw meerkats engaged in a wide variety of social and solitary behaviours to solve tasks.

Meerkats may look adorable with their big eyes and family orientated behaviour, but they have developed a technique for handling the venom found in scorpions, which they eat.

Cleverly, the meerkat zeroes in on the tail and bites off the scorpion's stinger and discards it. Without its tail the scorpion can’t deliver their venom, but there is still venom on its exoskeleton, and to combat this, meerkats have learned to rub scorpions in the sand to remove any remaining venom.

Interestingly, despite living in the desert, meerkats do not need extra water in their diets, getting all the moisture they need from the insects and grubs they eat, whereas us mere mortals would die within 3 – 5 days without additional water.

First time I saw mongooses was in Alvaiazere. Too big to be ferrets, too small to be a fox. Quick as well!

Up Close and Personal with Snakes

Dogs and cats – can they ever be friends?