The new GT4 RS sits atop Porsche’s Cayman range. Jack Evans finds out what it’s like.

Only Porsche’s most focused, performance-oriented models get the RS treatment. There’s been longstanding thought that the Cayman has been kept at such a level so as not to interfere with its 911 big-brother – but with the new 718 Cayman GT4 RS, the gloves are off.

This is a Cayman dialled right the way up. Acting as a flagship for the range, it gets the same engine as the larger 911 GT3 but in a more compact, lightweight body. And of course, as with any RS model, it’s got a host of aerodynamic touches that not only keep it as sticky in the bends as possible, but ensure nobody misses it. We’ve been behind the wheel… 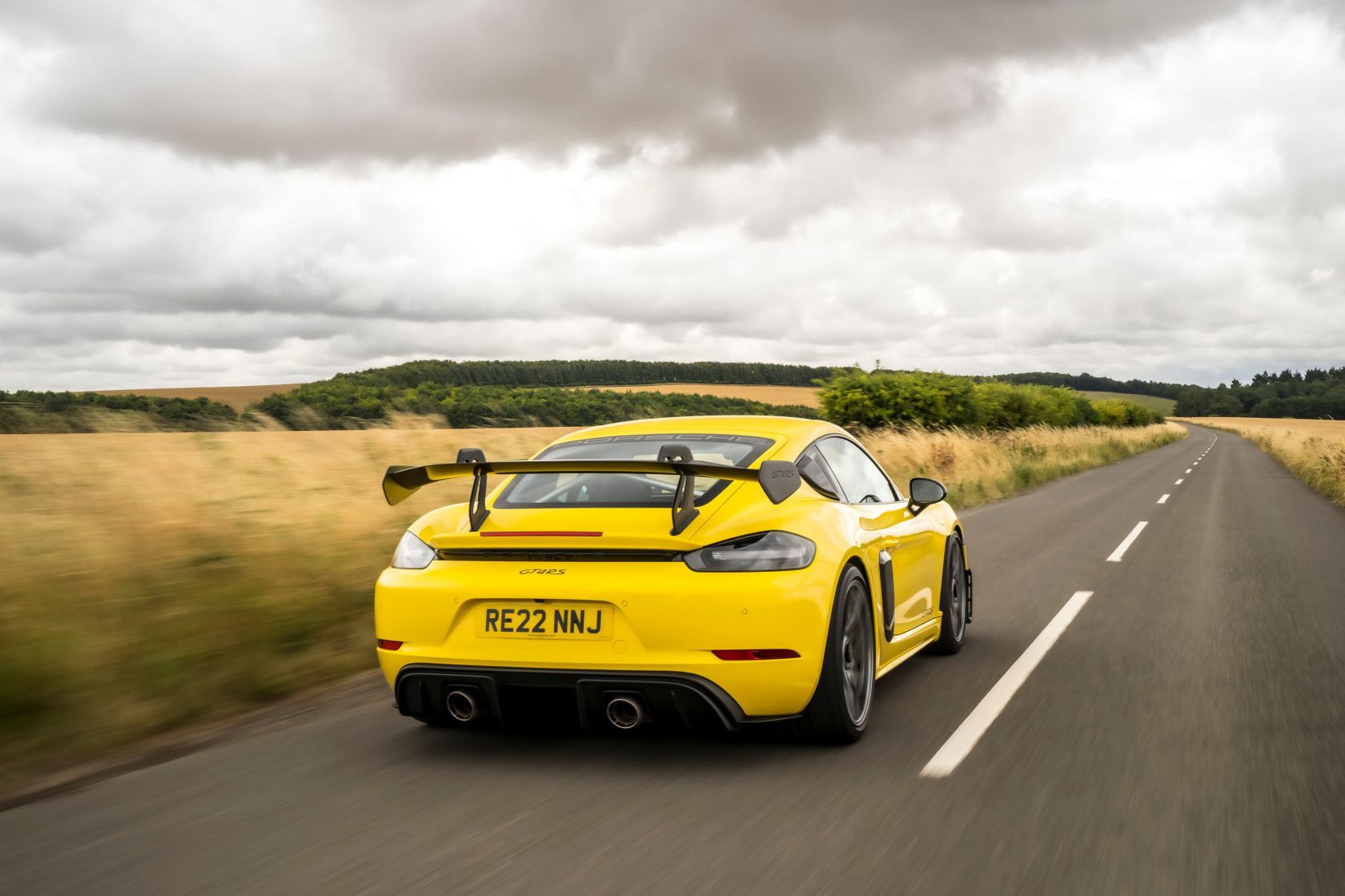 Every part of the regular Cayman GT4 has been tweaked, sharpened and – in most places – made lighter in its evolution to RS specification. It weighs in at 1,415kg with fuel, some 35kg less than the regular GT4. This has been achieved through the widespread use of carbon fibre reinforced plastic (CFRP) in areas such as the bonnet and wings, while even the carpets have been made thinner and lighter.

A new Weissach package – fitted to our test car – takes these measures even further and adds a titanium roll cage, titanium exhaust pipes and a number of panels that are given a carbon-weave finish for an even sportier look.

The GT4 RS makes use of the same 4.0-litre naturally aspirated flat-six engine that you’ll find in the larger 911 GT3. That means an extra 79bhp over the standard GT4, with total power coming in at 493bhp. Torque has been lifted too, rising from 430Nm to 450Nm. All cars get Porsche’s seven-speed dual-clutch PDK automatic gearbox – there’s no manual option here, unlike the GT4.

What that equates to in terms of performance is a 0-60mph time of 3.2 seconds while flat-out it’ll manage 195mph, edging the standard GT4’s top speed of 187mph. Though fuel economy isn’t, of course, the real goal for a car like this Porsche claims that the RS will still return up to 22.8mpg, though these figures have come through the older NEDC testing cycle. 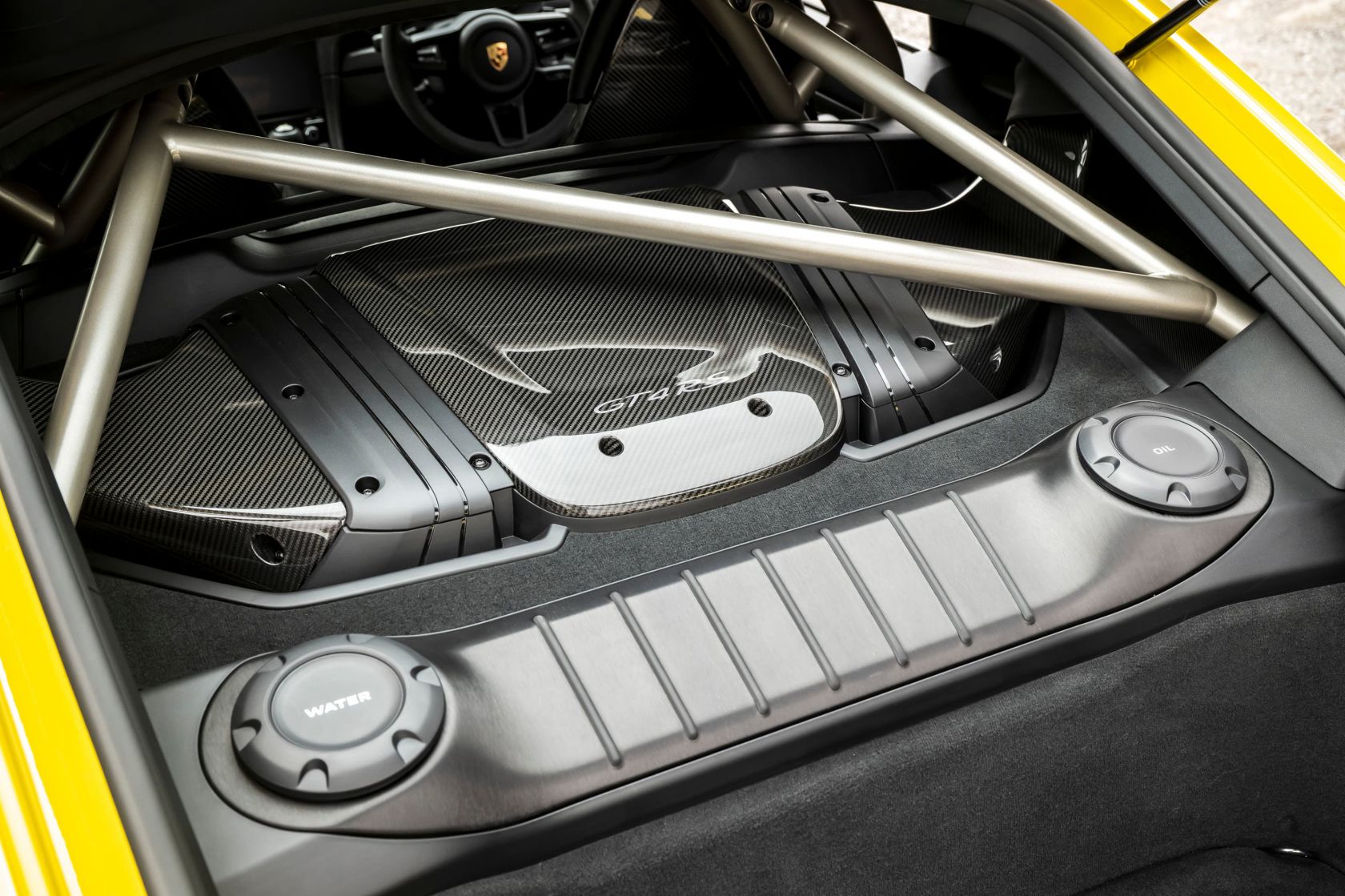 There’s no need to dance around it – the Cayman 718 GT4 RS drives like few other cars available today. This is a car that takes the performance and brawniness of the larger GT3 and throws it into an even sharper and more compact package. The steering is spot-on, while the gear shifts from the PDK gearbox fire into place with scarcely believable crispness.

Then there’s the noise of the thing. The GT4 RS features air intakes behind the driver and passenger windows, so when you’re accelerating hard you get this glorious blend of intake noise and outright savagery from the engine. The engine, since we’re here, feels even more capable within the Cayman package, while the ride – though firm – is remarkably pliant. We even spent one or two hours on the motorway and the Cayman managed it without a quibble.

Porsche’s RS models aren’t known for their shy and retiring looks, and the GT4 RS is no different. Our car’s Weissach package included a carbon-fibre weave bonnet and a huge rear wing, meaning everywhere it went, it attracted a crowd. But these types of cars aren’t designed to fly under the radar, so we can’t fault it for a bit of flamboyance.

The whole car is designed to go fast, after all, which is why it incorporates all manner of aerodynamic touches. The underneath of the car has been optimised to lower drag and it ties in with the rear diffuser, too. As a result of these changes – and others – the RS generates 25% more downforce than the regular GT4, in fact. 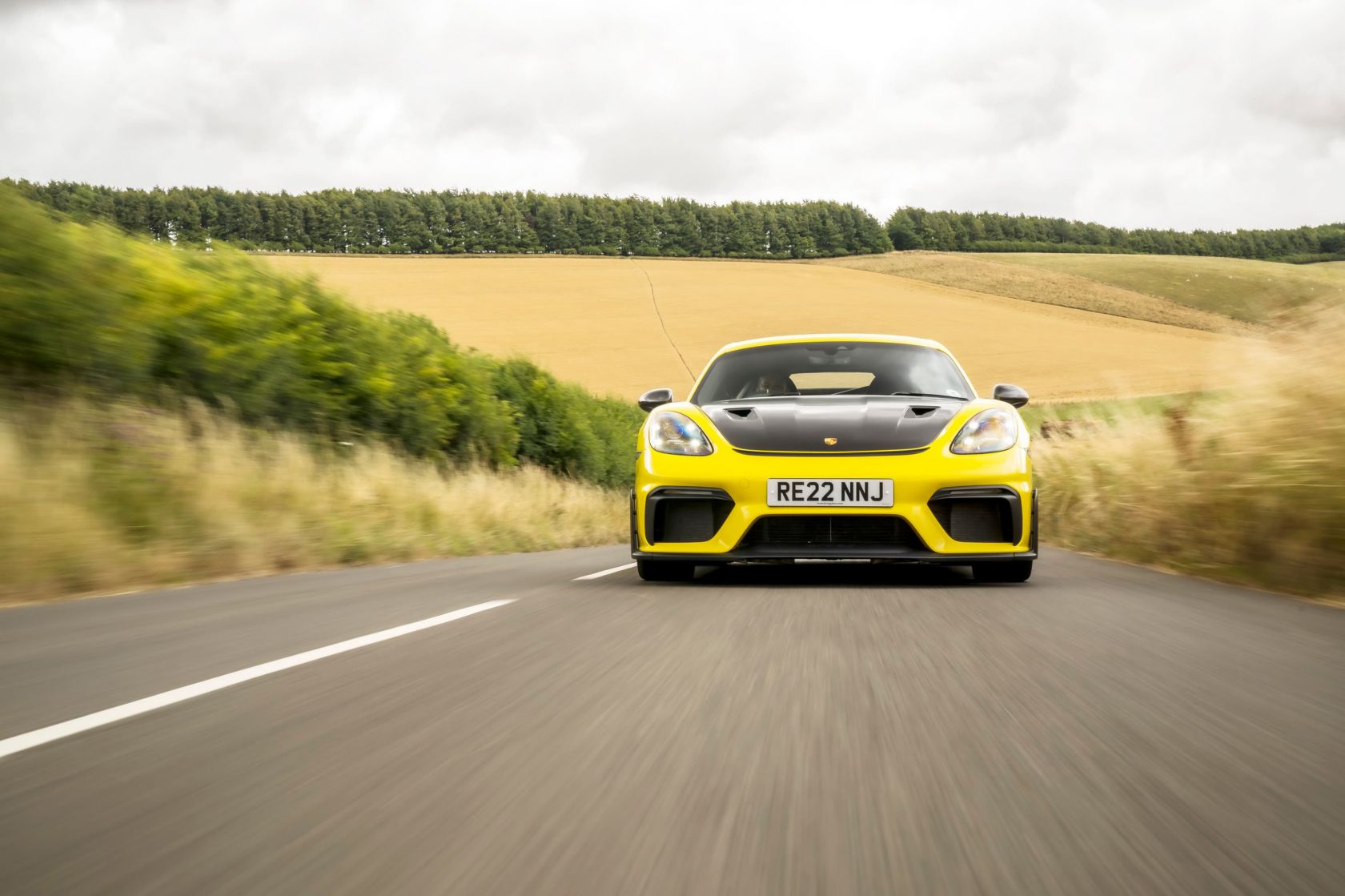 The cabin is definitely stripped back, but it hasn’t been left devoid of creature comforts either. Our car came with air conditioning (something that is usually taken away from lightweight models), and this does help to make the RS more agreeable as an everyday road car. The bucket seats – which can be adjusted for height – are hugely supportive, while the general driving position is absolutely spot-on. 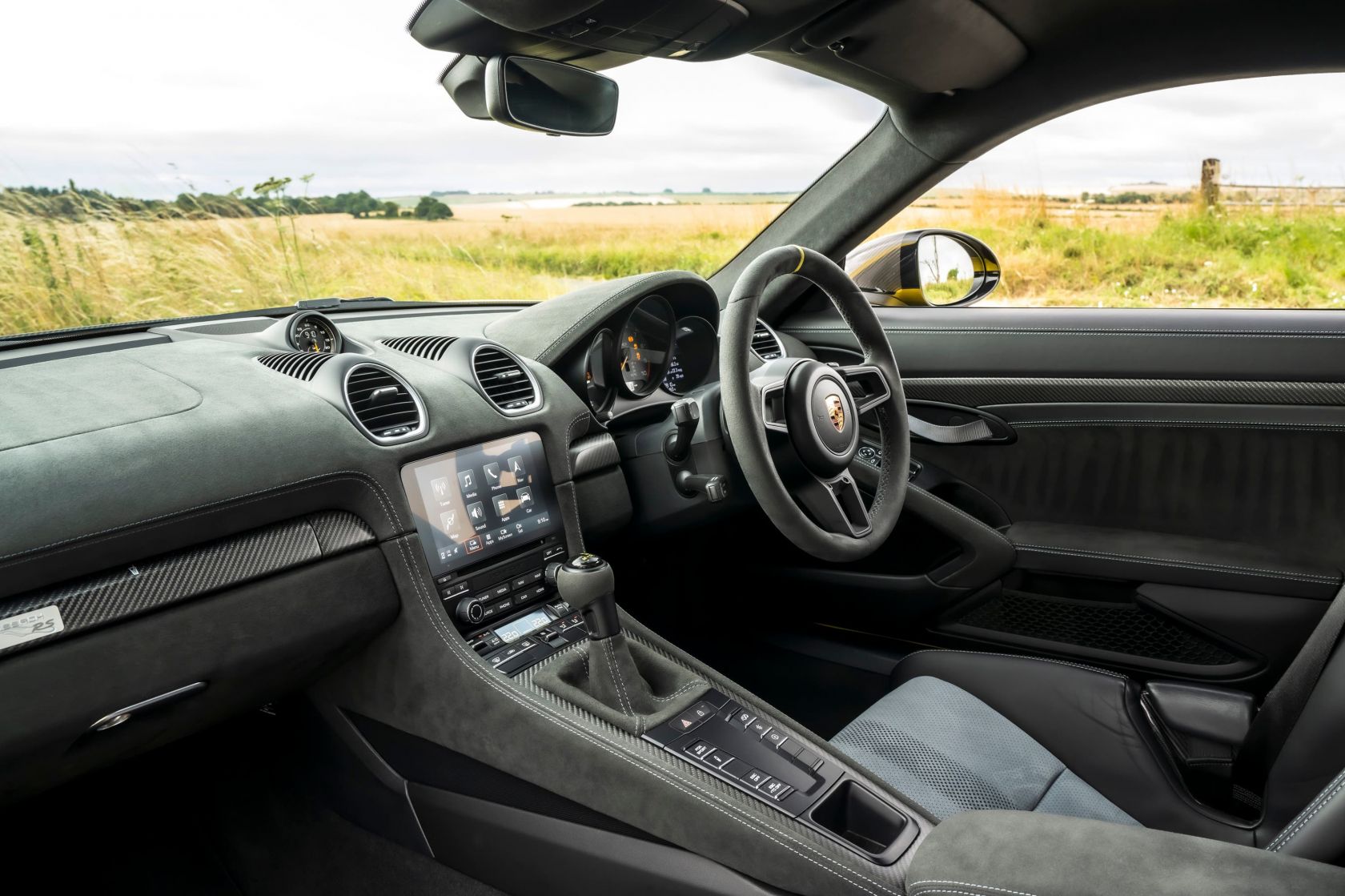 Plus, because it’s still a Cayman, the GT4 RS has a usable front boot section in the nose which has 125 litres, while a rear storage area adds an extra 136 litres, so there’s more than enough space for a few bags.

Features such as an adjustable chassis for race track use and ball-jointed suspension mountings – which help to give more direct handling – show that the upgrades to this car are all about making it go as quickly and drive as sharply as possible. You can – as with any Porsche – bump the price up considerably by going near to the options list.

The Porsche 718 Cayman GT4 RS is undeniably one of motoring’s all-time greats. This is a car to remind you just why driving is so special and, through its almost nerve-like link between driver and machine, ensures that each drive is just as memorable as the last.

Though it might be angled towards track use this is still a hugely competent road car and one that should be celebrated wholeheartedly. Its combination of pace and outright agility is nothing short of spectacular. It’s a sports car for the ages.

Mercedes 190 - birth of the baby-Benz

What makes a home ‘home’?

Boca do Inferno in Cascais

H5N1 - a killer lurking in the shadows

Events at the Museum