HomeMadeira & AzoresA Quick Getaway at Ponta Delgada: What to Visit?

We believe there’s no better way to discover a little more of the world than through travelling! Human beings live to experience new places and moments and remember sensations. Mysteriously, each one of us seeks an unparalleled hideaway filled with unique places. And what better place to find it at than at Ponta Delgada?

We can and should begin with exploring our homeland: the Portuguese territory is one of the most wonderful places in the world, so why not choose a getaway right here? Enjoy the landscapes, traditional food and an atmosphere where friendliness lingers in the air. Join us on this brief tour of the capital city of São Miguel and be stunned by the must-see locations to visit on your getaway to the main Azorean island.

Some outings are classics for those visiting the Azores and getting to know Ponta Delgada is one of them. With just over sixty-seven thousand inhabitants, this is the capital of São Miguel – the largest island on the archipelago and presents itself as a city in which one feels genuine heritage, where the cobblestone pavements are typically Portuguese, and nature is a part of everyday life.

When visiting Ponta Delgada, start at the Portas da Cidade (the city’s doors). This construction in basalt stone, composed of three arches dates back to 1783 and its initial location was at the old city port but in the early 1950s they were demolished and reconstructed on their current location, at Praça Gonçalo Velho.

Next to the entrance to the city you will find Largo da Matriz, the main church square, and Torre do Relógio, the clock tower which is a part of São Sebastião Church (the Church of Saint Sebastian) which is considered to be Ponta Delgada’s headquarters and is made of the black basalt stone, just as the city’s doors, which is found in all public monuments in the Azores.

From Largo da Matriz, one can access a variety of streets where local commerce and some of the typical island shops which still preserve their authentic vintage features are found. Once there, don’t miss out on the opportunity of visiting Louvre Michaelense, the most renowned pastry bar in Ponta Delgada.

When visiting São Miguel, the Câmara Municipal de Ponta Delgada, town hall, and Torre Sineira, the bell tower, are also worth a visit. Be prepared for 106 steps on a spiral staircase, but which are well worth the effort for, when you reach the top of the monument, you will have a 360 degree view from which to contemplate the beauty of the city.

Only five hundred metres from Praça do Município, one of the town’s squares, is one of the most visited monuments in Ponta Delgada: Convento e Capela de Nossa Senhora da Esperança, the Convent and Chapel of Our Lady of Hope. It was completed in 1540, and in addition to still being inhabited by nuns of the Order of São Francisco today, it stores in its chapel (a space composed of gilded carvings and extraordinary 18th century Portuguese tiles) the treasure of Our Holy Lord Christ of Miracles. 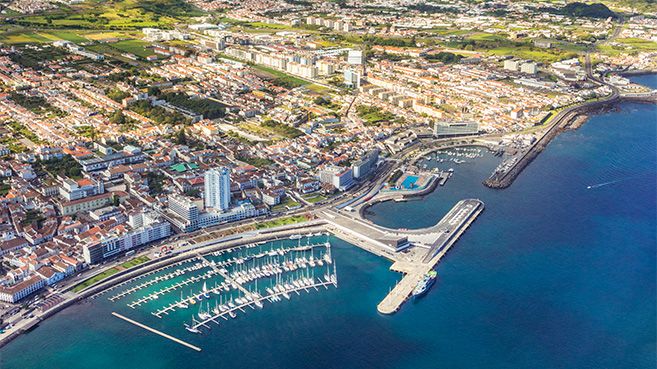 As you walk through the distinguishing streets of the island you will find many other points of interest such as the Church of the Jesuit College, the Antero de Quental Garden, the Conceição Palace, the Nossa Senhora do Carmo Church, the Graça market, the São Pedro Church, the António Borges garden and the Augusto Arruda pineapple plantation.

The Augusto Arruda Plantation stands out: a free access place with over one hundred years of history, as does the António Borges garden known for its tree species from all over the world as well as its set of caves.

After visiting the city we believe it will be at the top of your list of priorities to explore the myriad of wonders that lie closer to the sea that surrounds this beautiful Azorean island. Ponta Delgada boasts a dazzling seafront facing the Atlantic, and the waterfront is filled with terraces, bars and restaurants that serve the best of both regional and international cuisine.

Start your maritime tour at Avenida Infante Dom Henrique by contemplating the fantastic Ponta Delgada Marina and the waterfront where one can take a stroll, go cycling or even take a dip at the São Pedro swimming pool, also known as piscina Oceânica. Just a kilometre away from the marina, find the Forte de São Brás, the largest fortress still operating on São Miguel Island at the command of the Azores Military Zone, located at the western end of the port of Ponta Delgada. Take advantage of your visit to this great monument and visit the Azores Military Museum!

Since you’re on the waterfront, just a five minute walk away from the beautiful São Miguel streets, you can find Campo de São Francisco, the city square and one of the largest in the Azores, where the Monumento ao Emigrante (Monument to the Emigrant) was erected as a tribute the Azorean people scattered around the world.

Staying close to the sea, make sure you go whale watching as you can see sperm whales as well as dolphins. Nautical activities, such as boat trips on the open sea and even surfing are a must on the islands since the Azores are filled with marine biodiversity. To make the most of the Azorean coast, be sure to visit the beaches of Ponta Delgada which are joined together by a 5 km coastline between Ponta Delgada and Praia do Pópulo with Avenida do Mar boulevard always running alongside it. 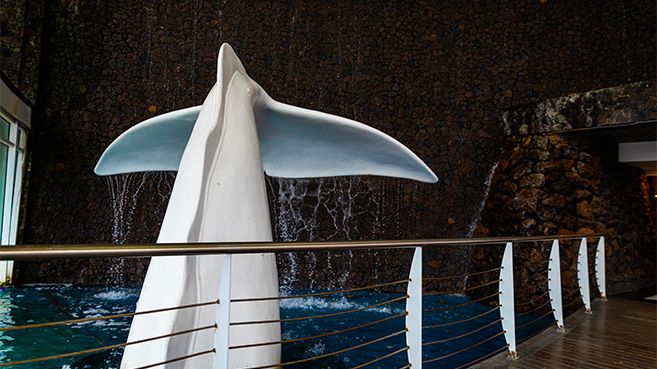 Here, we highlight Ilheú de Rosto de Cão viewpoint, São Roque and Milícias beaches, the ruins of the fortress of São Caetano and the Cape of Ponta dos Caetanos.

You can get to know these unforgettable locations and enjoy activities and experiences through guided tours.

Surrounded by the main tourist spots and monuments of Ponta Delgada, Parque Atlântico Shopping Centre offers typically Azorean spaces where you can get the best tips on how to enjoy tours, excursions and activities from Ponta Delgada, namely through Agência Abreu, at the shopping centre, distinguished for its excellent quality trips and unique tours. For more information, please contact us at www.parqueatlanticoshopping.pt/

60 accidents registered last week on the roads of Madeira

Sea Land Islands - Productions of excellence between Sardinia and the Azores