From the world of IT to learning to grow food.

I had heard through the Algarvian grapevine about an Englishman called Peter Simmons who had recently started an organic farm and who could be found selling the most wonderful fruit and vegetables at the Loulé market every Saturday morning.

I thought it was about time I found out more and headed up into the hills above Loulé to the little village of Amendoeira. True to its name, it's a real hot spot for almond trees - and is now also the home of Amendoeira Organics.

The place used to be a bakery before Peter and his wife Véronique bought the land back in 2018. Peter used to work in computers and the first two years after moving here he was constantly going backwards and forwards to England for work. He wished he could somehow find a way to stay in Portugal permanently and in early 2020 his wish came true…. 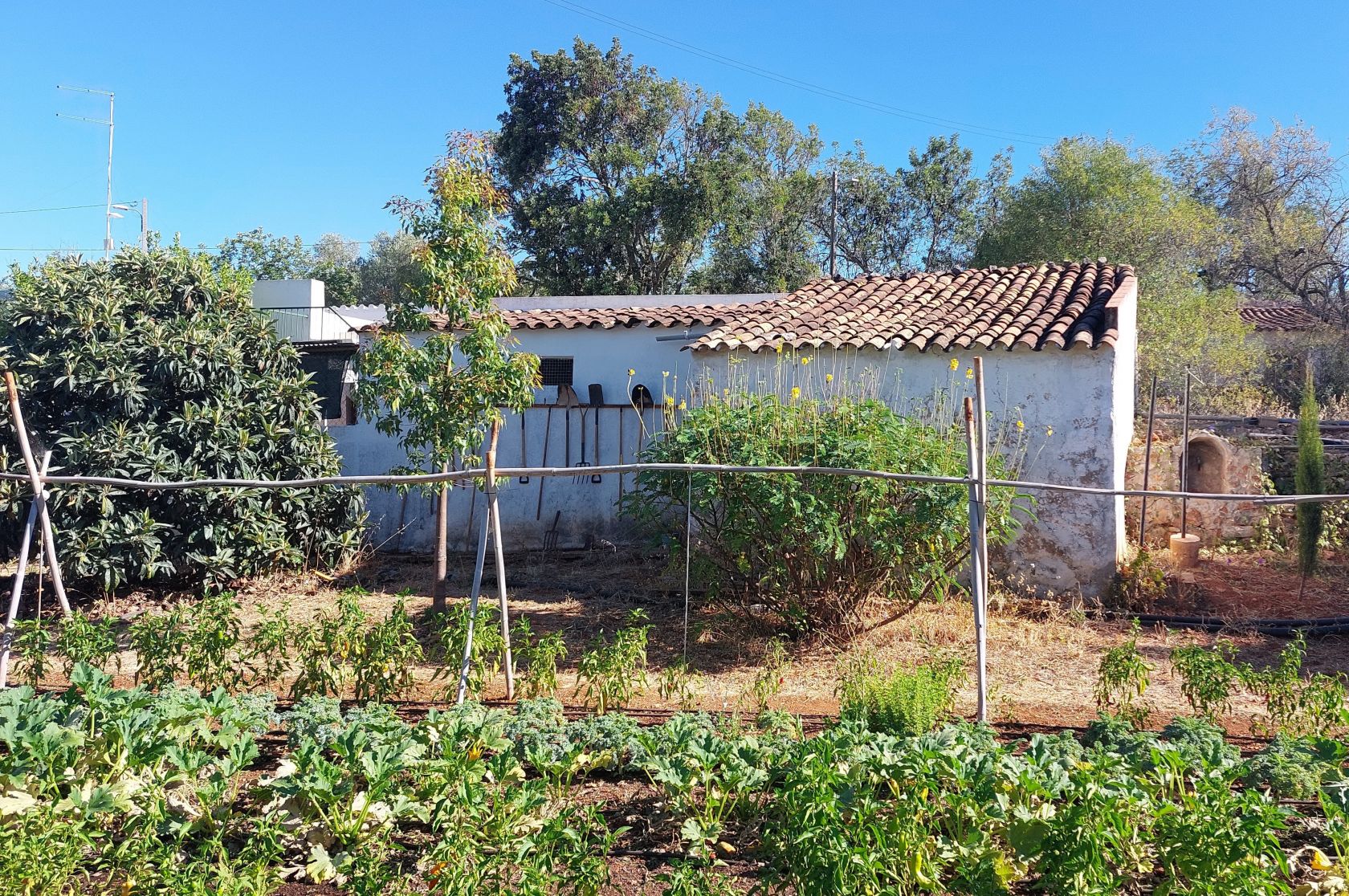 Stuck at home, the couple were very surprised when the organic certification, that they had applied for on a whim, was granted. Peter had very little experience with gardening but after watching a lot of Youtube videos he got out in the garden and quickly found that his fingers, which were more used to tapping away on a keyboard - were pretty green, after all.

When I arrived quite early in the morning, I found Peter and a nice couple of Work Aways - already busy ‘working away’ on the farm. They were picking alfarrobas which Peter said might actually be his most profitable crop this year.

He started off by showing me the area he had recently cleared and plans to use to grow lots of different fruit trees. He also took me past the asparagus garden which was fenced off to keep it out of reach of the wild boar who regularly come to have a little nose around the farm. Coming up to its second year, the asparagus is looking very promising and should provide him and his customers with a good supply for many years to come. 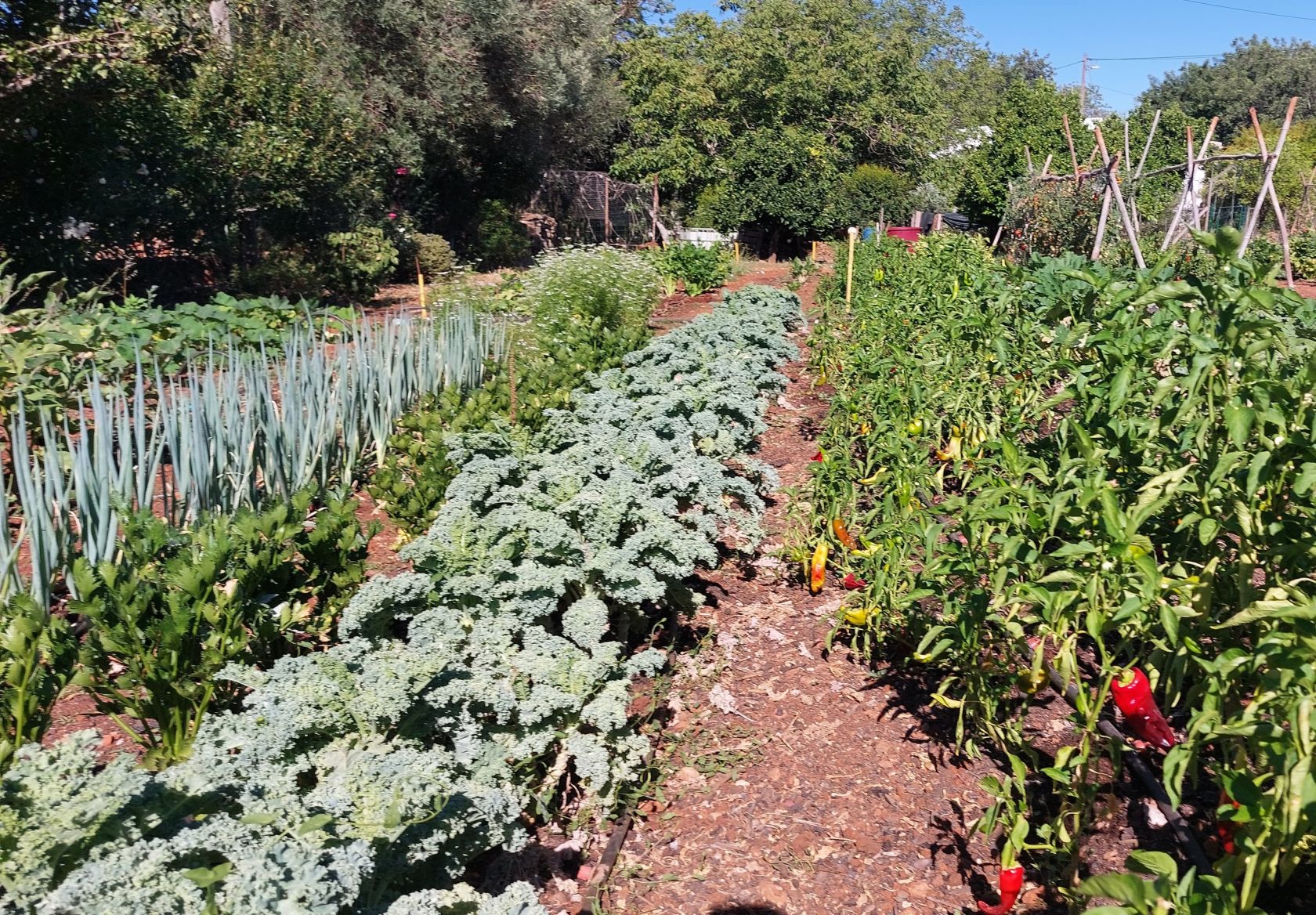 Round the front of the house, he showed me a huge walnut tree that they were very lucky to inherit with the house and that provides them with plenty of walnuts. The rest of the land, however, took a lot more convincing to bestow them with food - but it certainly does now!

Rows of lettuce, onions, kale, basil, peppers, pumpkins and even strawberries lead the way to a little greenhouse at the end of the land full of sweet little tomatoes growing sky high.

But everywhere you look Peter has something or other growing. Indeed, with the exception of the flower and the ‘Star Trek’ beds outside the front door, Peter has been repurposing every spare pot, nook and cranny to see what he can get to grow.

Speaking of which, he even showed me a type of Japanese ginger plant that had just sprouted in one corner and told me how it was a present from a Japanese lady customer. He suspects it may have been part of her cunning plan, since it's rather hard to come by, and if Peter can grow it - he might start selling it. 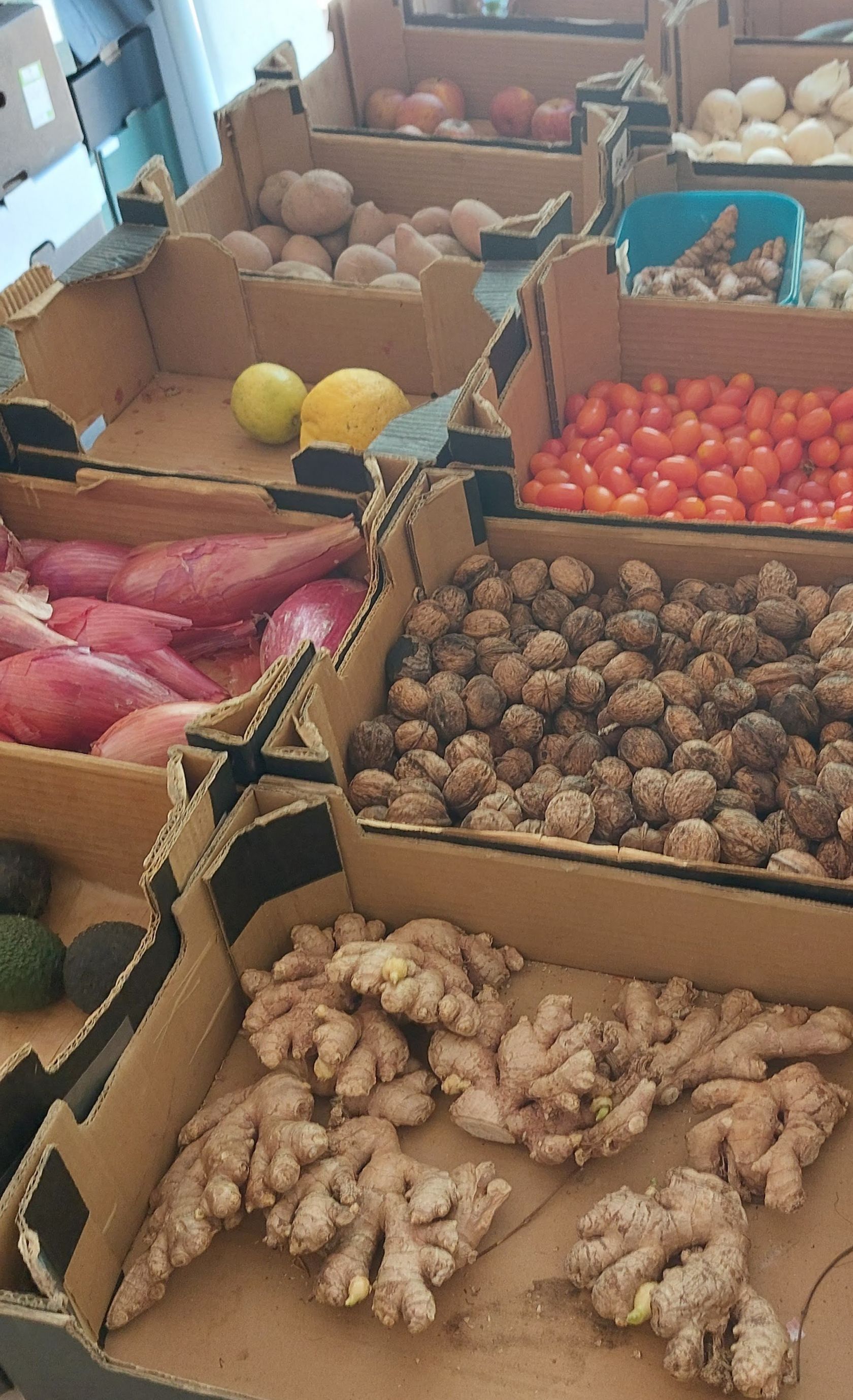 Peter uses a combination of horse manure from his neighbours, wood chips and biochar made from his tree cuttings - and he’s extremely proud of his compost heap.

They have 18 chickens and these ladies not only work hard laying eggs - but they also do their bit to contribute to his fertiliser, as well.

Every time he plants something, he simply adds a healthy heap of this organic matter - and his soil just keeps getting better and better.

Peter was amazed by what he had been able to produce and in December 2020 he decided to set up his stall in Loulé market. Everybody has been very welcoming and Peter just loves ‘market life’.

Indeed, learning to farm on his land has been a wonderful way to connect with the locals who, in recent times, have become far more accustomed to people going off to seek their fortunes elsewhere. 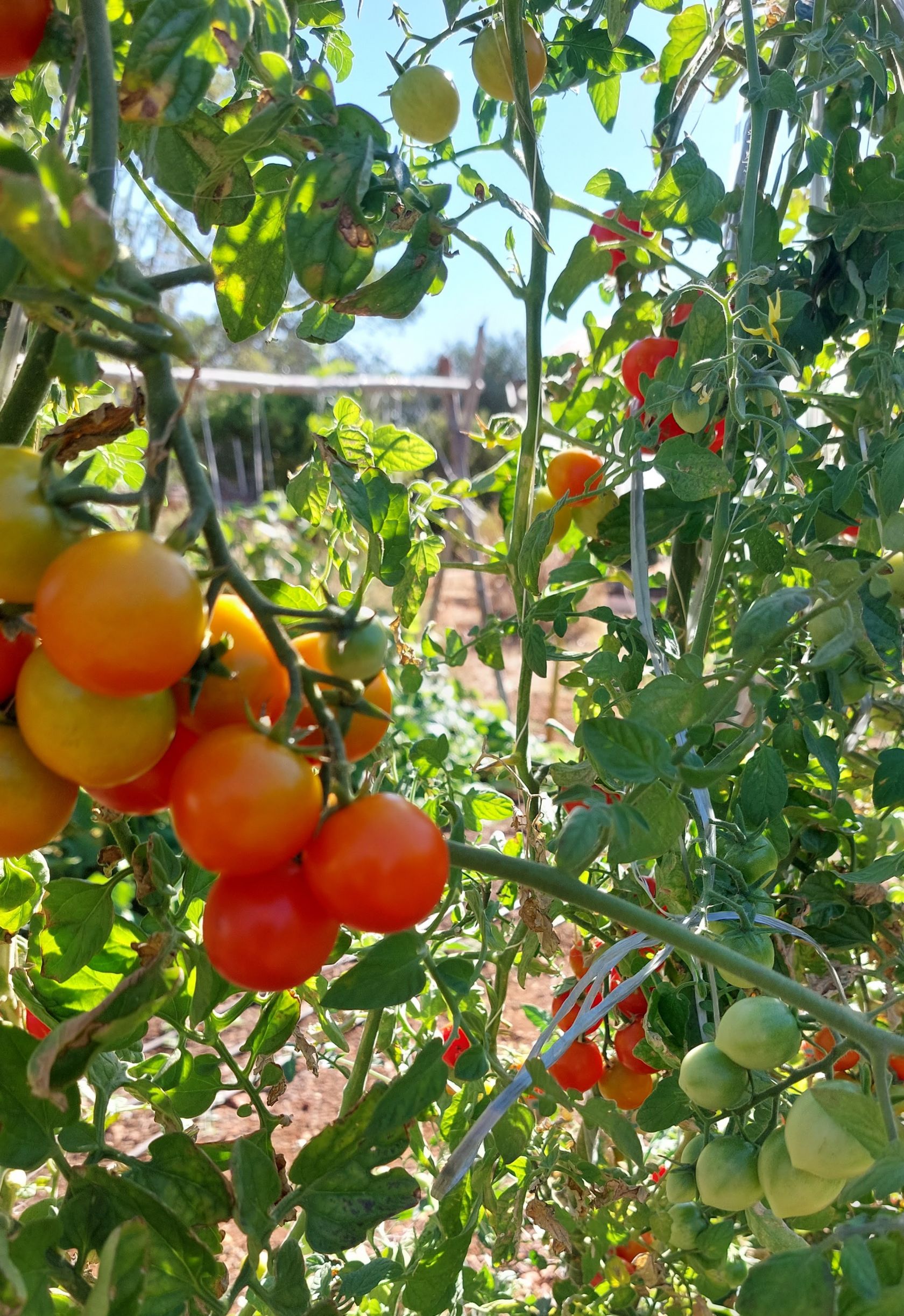 This enthusiastic newcomer has therefore been a rather refreshing change and the subject of much curiosity, both at market and in the neighbourhood - and they are always popping round to see what he’s up to and to offer advice.

Now, Peter can’t always grow everything himself. But he feels that it's very important to be able to provide his customers with a wide range of options and supplements his offerings with produce from other nearby organic farms. (I have it on good authority that the shiitake mushrooms that he gets from a local producer are amazing.)

But what if he sells out before you arrive? Well, that is a danger. But if you visit the Amendoeira Organics website you can place your order ahead of time and either pick it up at the market - or pay a visit to the farm for yourself.

Peter also writes a lovely weekly blog about the ‘goings on’ at the farm and if you would like to keep up to date with his adventures then please add them on Facebook @Amendoeira Organics or visit the website www.amendoeiraorganics.com

A promising future for Figueiral Restaurant

Will More People Adopt Crypto in 2023? Here’s What You Should Know

We need to ‘stork’ about this amazing bird

Another creature about to go the way of the Dodo

Would you like to be a fly on the wall in a nesting box?

A Rocha - taking care of the bright and beautiful