Vinnie Adams has been working behind the scenes over the past year with UAP UK Media to find and investigate the famous Calvine UFO photo. It was an impressive investigative effort and showed that a simple grassroots investigation could yield actual results.

This past week I talked with the retired UK Ministry of Defence Civil Servant, who initially broke the case back in 1996.

Nick Pope worked at the "UK's UFO Desk" from 1991 to 1994. His job was to divert the public's attention away from the event and pass all the evidence and data to Defence Intelligence 55, DI55 for classified investigation.

After retiring, Nick wrote several books about the topic and included "The Calvine Photo" in his book and speeches.

According to his website Nickpop.net: "On the evening of August 4, 1990, two witnesses in Calvine, Scotland, saw a vast, diamond-shaped UFO. The UFO hovered for about 10 minutes before ascending vertically at high speed. For the first 5 or 6 minutes of the sighting, a military jet aircraft was seen in the vicinity of the craft, making a number of close, low-level approaches, before flying off."

The two witnesses worked in the local hotel near Calvine and reported the event to the Scottish Daily Record along with six negatives and several photos.

The Scottish Daily Record editors wanted a comment from the MOD before they printed the story, so they sent the photos to the MOD Media Affairs Officer of the time. After 30 years, the MOD released the Press Officer's name, Craig Nelson, but the identity of the two witnesses is still not released. 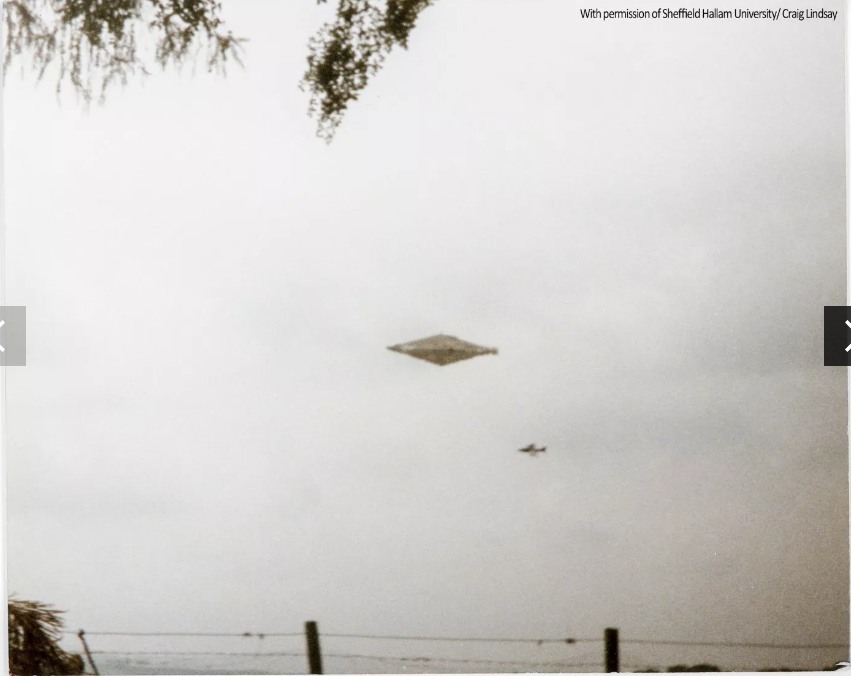 Craig thought the photos were amazing and sent them to Nick Pope's predecessor, who passed them on to defense intelligence.

The defense intelligence asked if they could see the negatives, so, naively, the newspaper sent them the negatives and "a number of photos."

Time passed, and Craig was quite surprised that no story had broken. No story EVER broke. The event "never happened." When documents were open source released, the MOD had to admit it investigated the incident but unfortunately "lost the photos and negatives."

But, and this is important, Craig kept at least one original photo inside the packaging from the Scottish Daily Record!

No one had asked him yet, but he was smart enough to hang onto the photo for 30 years! Supposedly he would whip it out from time to time and show it off.

According to photo analysts, if it's real and not a hoaxed photograph, it appears to be a tangible object approximately 60-80 meters long!

The Defense Intelligence determined "it wasn't US, UK, or Russian, so that left only" a finger pointing to the sky.

The incident caused a stir when the UK asked the US if they were operating a secret craft, and the US asked back in an angry tone, "Did you steal our tech and create a secret diamond-shaped craft?"

Vinnie Adams is a friend and fellow YouTuber. He hosts weekly live shows on his YouTube Channel, "Disclosure Team."

Right now, he is working with and publishing their active investigation results. Dave Clark initially found the photo by asking the simple question of who could maybe have the picture, and the Media officer was inclined to produce it.

Giles lives in Calvine and has done many boots-on-the-ground investigations, and he arguably found the exact spot of the incident.

A professional photo analyst has also gone through the photograph. He couldn't read the photographer's name, but he could analyze the paper and confirm that he thought it was a real photo.

What is impressive is now, in today's age, the debate and investigation go in real time on YouTube, Twitter, and other platforms.

Debunker Mick West has also investigated hoax theories. The most convincing one to me is a reflection of a rock in a loch, but as West admits on his MetaBunk.org website, "it would have to be a shallow graze angle and a long-range lens." Also, a reflection is always less bright than the original due to refraction. But the illusion is compelling when you see it.

I am also involved since there is some fighter jet in the background.

The fighter reportedly passed near the object several times. Is it a harrier? GR3? Hunter Hawker?

Graeme Rendall, an author in historic aviation and UFOs, gives his take on Vinnie's channel. Check out the interviews and ongoing investigation at the links in this article or on my YouTube Channel, ChrisLehto, and UAP Society!

I used to be very involved with ufology many years back, in the 1970s and had many sightings myself when I was younger. I used to write for Magic Saucer magazine and I am featured in Haunted Skies Wiltshire by John Hanson and Dawn Holloway. Over the years I have lost my enthusiasm for the subject but UFOs are still a reality for me. Like I said, I have experienced seeing them, but what they are remains a mystery. btw, I was reading Uri Geller's most recent Instagram post earlier today and he has shared that a UFO went into the sea not far from his Lamb Island.

Where is the UFO Evidence? 14 Notable Cases

"The Phenomenon appears to be REAL" – UAPx

UFO shot down an ICBM