Bony, external plates that are overlaid with scales.

Armadillos are found only in Central and South America, but one, the nine-banded armadillo, ranges from Argentina to the southern US. Approximately 20 species exist, and range in length from the smallest, the cutely named pink fairy armadillo at 8 cm (which incidentally has more fur than shell) to the giant armadillo, which can be up to 1.5m long from head to tail and weigh a hefty 60 kilograms.

In the southern US, some are naturally infected with the bacteria that cause Hansen's disease (leprosy) in people, but the risk is very low and most people who encounter armadillos are unlikely to get infected. They even eat them in Brazil, with people claiming it tastes like pork!

They have a banded protective shell on their backs, with soft skin in between the bands that expands and contracts to allow movement. They are apparently super easy to catch, and for fun, people try to sneak up on them and pick them up, which is very easy to do because are nearly blind and deaf, but the nine-tailed armadillo is also known for playing dead (like opossums) when caught, making it easier.

All have protective shell coverings, all have pointy snouts and long, sticky tongues, and their sense of smell is said to be sensitive enough to detect food up to 23cm underground.

They look bald, but they do have wiry hairs on the sides and belly, sometimes called ‘curb feelers’, and can feel their way round at night with the hairs detecting objects, but unfortunately can’t detect traffic and have earned the nickname ‘hillbilly speed bumps’, so if see one in the wild it is probably roadkill.

Their name comes from the Aztec word for armadillo meaning ‘turtle-rabbit’, and in Spanish translates as ‘little armoured one’, and the Portuguese name for them is ‘tatu’.

They all have strong legs and long claws for digging and foraging for food, with peg-shaped teeth, with the giant armadillo having the most teeth - up to 100 - and it can rise up on its back legs, balancing with its tail.

They dig for insects, their favourite food, and this digging is why many people consider armadillos pests - farmers and gardeners don’t want them rooting around for bugs while destroying their crops or plants. 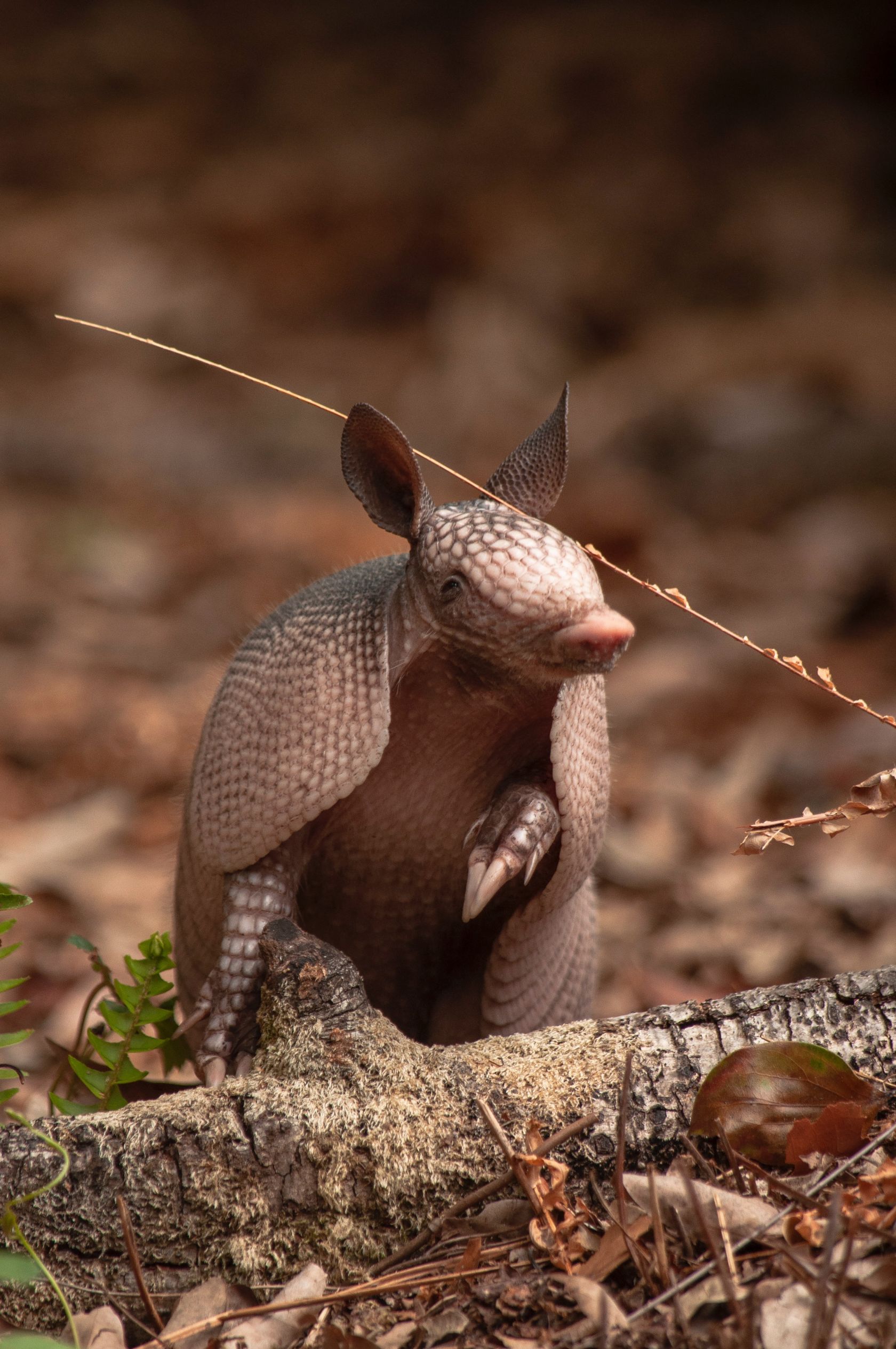 Although their shells are flexible, they are tough, simply made from modified skin for protection. When threatened, they will run, dig or press their body down into the soil to keep from being flipped over to expose their vulnerable under-belly. Not all armadillos are able to encase themselves totally in their shells - the three banded armadillo is the only one that can roll up into a ball for protection, with its teardrop-shaped head plate sealing the opening so no chinks show.

Armadillos may get together in burrows in cold weather to make a communal large nest, as having little body fat and thin shells, they find it difficult to maintain their own individual body temperatures. The majority are solitary creatures, travelling only to find food and avoid danger.

Primary predators are coyotes, followed by bobcats, cougars, wolves, bears, raccoons and even large raptors. But they aren’t cowards – according to the San Diego Zoo, they have been known to throw their bodies on top of snakes, killing them by cutting them with the sharp edges of their shells.

Their closest relatives are sloths and anteaters, and will also eat fruit, eggs, and small animals - even carrion. In hotter months, armadillos may be nocturnal, foraging at night when it is cooler and may start hunting earlier in the day, becoming more diurnal.

Uniquely among mammals, armadillos always have genetically identical quadruplets - the female ovulates one egg that subsequently splits into four once fertilised, and always gives birth to identical quadruplets. The father doesn’t bond with the mother and takes no part in helping to raise the young. Newborns, called pups, have soft shells like human fingernails, grey in colour that hardens within a few days, and can live from 4 to 30 years.