What do we know about them?

Goats were among the first animals to be domesticated over 10,000 years ago, with well over 200 domestic breeds now bred in the world. Goats play a major role both in commercial and independent farming, particularly in tropical, subtropical and Mediterranean regions where they are crucial for the supply of meat, milk, fibre and even dung.

Usually goats are docile, even in the wild, but will protect themselves by kicking, fainting, or head-butting predators. They also have a secret talent few people know about - they are powerful and fast swimmers! Male goats, called bucks or billys, usually have a beard, females are called does or nannys, and their young are called kids. They are ruminants (chew their cud), with special four-compartment stomachs especially designed to digest roughage such as grass, hay and silage. They have cloven hooves, meaning that the hoof is split into two main hooves that work independently of each other.

Goats have a reputation for eating everything, including tin cans, but this is untrue. If they chew on a can, they probably aren’t actually chewing on the metal but more likely eating the label and the glue on the label - the label is like eating leaves off a tree and the glue is a sweet treat to them. When it comes to normal foraging, they won’t eat just any old thing, but can be rather fussy, picky eaters, and can be meticulous about what type of weeds, grasses and hay they will consume.

It’s common to see herds of goats slowly munching their way through the beautiful Portuguese countryside but they can have a crucial role - by eating the dry vegetation in rural regions, they could help create firebreaks, thus aiding protection against the spread of forest fires. June this year marked five years since the deadliest fires on record in Portugal, responsible for 66 deaths around the town of Pedrógão Grande alone. Part of Portugal’s problem, as in other southern European countries, is that inland villages have shed their populations, and the absence of shepherds, goatherds and farmers has left forest lands overgrown, allowing fires to spread and burn faster. Steep slopes are out of reach for a tractor and are very costly to tend by hand, particularly for an ageing population. 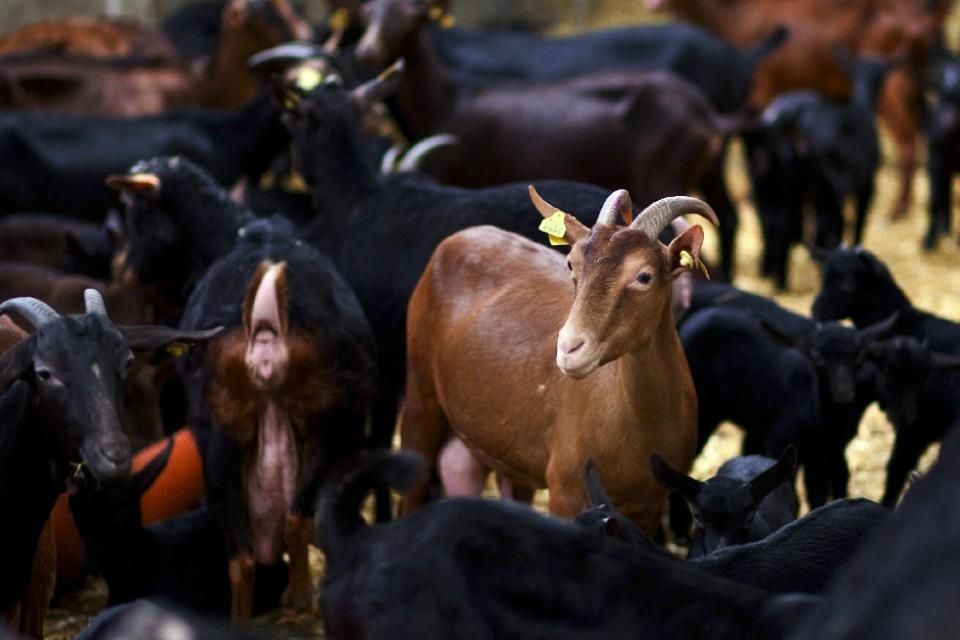 Goat production in Portugal is around 32,000 farms, and 420,000 animals have been identified, which translates to an average of 13 animals per farm. Goat farms reveal a greater milk tendency than sheep farms, and Portugal’s most famous goat’s cheese is Serra da Estrela cheese - famous for its creamy texture and intense smell. It hails from the highest mountain range in mainland Portugal, an area traditionally known for pastoral farming. Goat meat is healthier than other meats, having around two-thirds the calories of beef and three-quarters the calories of chicken. It also has a third of the fat of pork and less than half the fat of chicken. The best of flavours come out when they are slow-cooked, with the taste and flavours changing as the goat matures. Young goats taste the best with tender meat and a less ‘gamey’ taste.

The Serrana breed is the most important indigenous goat breed from Portugal and furthermore was exported to other regions of the world, notably South America during Portuguese colonisation.

Around the world, goat meat is the most widely consumed red meat, and worldwide, goat’s milk is even more popular than cow's milk, with one goat producing an average of a gallon and a half of milk a day - more than enough in a developing country for one family - takes up less space and needs less food than a cow. Goat’s milk is less likely to cause lactose intolerance and is easier to digest than cow’s milk, it contains less fat and is naturally homogenised. The popularity shows no signs of slowing down either. Goat is the fastest growing segment of the worldwide livestock industry.

Goats and orher animals are very important in the survival of human beings, we as humans need to be always reminded of this since our precious food and water sources are not infinite.

What are moths for, exactly?