HomeCuriosity What do you know about Marmosets?

Yes, they are, as are numerous species of small, long-tailed South American primates. Similar in appearance to squirrels, marmosets are tree-dwelling monkeys that move in a quick jerky manner.

Two that I would like to draw your attention to are the Buffy-tufted-ear marmoset (callithrix aurita), and the Buffy-headed marmoset (Callithrix flaviceps). Both are on the Brazilian and the IUCN Red Lists of Threatened Species.

All marmosets are small, with these particular marmosets having a body mass of only about 11 oz (306 g). That’s roughly the size of a three-month old kitten, which will give you an idea of their size.

Both species are classed as New World Monkeys that live in the rainforests on the Atlantic coast of southeast Brazil. Of all the marmosets, they have the southernmost range, and both are severely threatened by deforestation, diseases such as measles (believe it or not), rabies and viruses, and hybridization with invasive species, meaning interbreeding with invasive species as a result of the release of illegal pets, which further threatens their existence as a pure species. Their predators include tree-dwelling snakes, wild cats, as well as birds of prey, such as owls and raptors. Only 7% of their original forest now remains and are two of 25 of the world’s most endangered species. 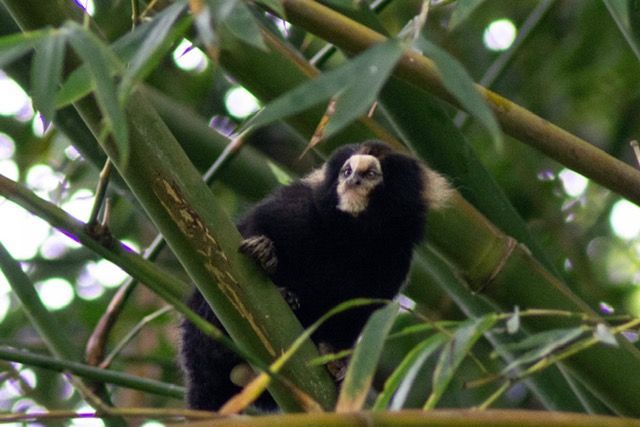 The buffy tufted-ear marmoset has a distinctly gothic appearance. It sports a thick black fur coat, long tapering clawed fingers, unruly bushy ear tufts, and a chalky-coloured face that resembles a Mexican Day of the Dead sugar candy skull. The buffy-headed marmoset looks a little like an ageing clown: the black markings around its eyes a little smudged, perhaps, as though its hands trembled as it put on its makeup, its hair sticking out at the sides like an uncombed mop. They live in fluid groups of between four and 15 individuals, and group composition may include multi-male/multi-female, one male/multi-female, or one female/multi-male groups.

Unlike most marmosets, buffy tufted-ear marmosets are primarily insect eaters, although their diet will include small lizards, frogs, snails and spiders. Ants, termites, larvae, caterpillars and large-winged insects are all favourites. They supplement their diet with flowering plants, gums, cacti and nectar. This diet provides sufficient protein for their small bodies. Buffy headed marmosets are herbivores, eating fungi and occasionally bird eggs and nestlings. Common marmosets have a lifespan of 12 years, so it is supposed that these two species are likely have a similar lifespan. 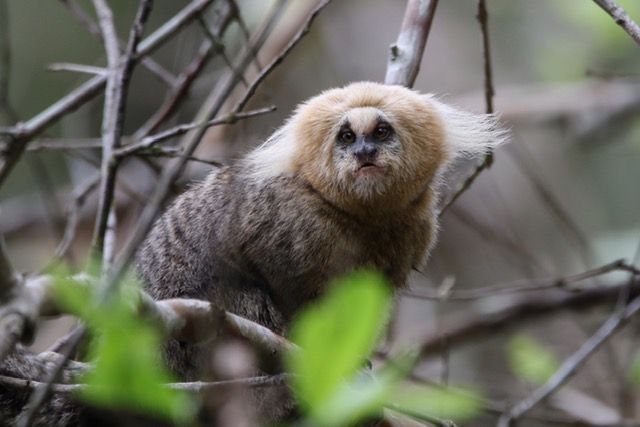 The buffy headed marmoset is even more menaced - this miniature monkey from Brazil faces a losing battle with disease, invasive species and an ever-shrinking habitat. They also live in groups of up to fifteen consisting of related individuals, where females dominate males. Each group usually contains only one breeding female.

These Marmosets are not doing well, with an estimated number of only 2,500 of each species left in the wild. The species needs swift and aggressive action to safeguard their survival, but that requires money and support. Given that few people have heard of this animal, Rodrigo Salles de Carvalho, co-ordinator and founder of the MMCP (Mountain Marmoset Conservation Program) says his group struggles to get the required funding. Moreover, the Brazilian government has hardly proven itself conducive to conservation and environmental issues. MMCP are moving forward with data collection with surveys - an important part of their conservation programme - environment training, even captive conservation breeding and strategies to ensure viable populations exist. Their mission is to conserve viable populations of both these species in their naturally occurring area, for the prosperity of the environment and for present and future generations. There have been huge advances in the husbandry of the buffy-tufted marmoset in captivity, and thanks to the efforts of Guarulhos Zoo, the Rio Primate Centre, and their own captive breeding centre at the University of Vicosa, they have improved greatly in keeping the species alive in captivity.

If you would like to get involved in any aspect to help support this group to preserve the plight of these cute creatures in their own natural environment, the MMCP would be pleased for you to visit their website: https://www.mountainmarmosetsconservation.com for more information on safeguarding the very existence of these animals.

Grieving dolphin identified in the Algarve

Where in Portugal do people speak the best English?