From Doodlebugs to Drones


On the fine morning of 16th June 1944 at the tender age of ten I encountered for the first time a V1 unmanned flying bomb which passed closely above our primary school bomb shelter. Its buzzing engine soon cut out causing a steep nose dive harmlessly into the mud flats of Portsmouth harbour but rather uncomfortably close to the Royal Navy armaments depot at Priddy´s Hard. It was to be followed by 9,520 others aimed at targets in South East England in mass sorties of one hundred a day. In total, more than one million British people were affected by the total or partial loss of homes and workplaces.


Defences were unprepared for this new method of attack. Barrage balloons were ineffective partly because a Kuto cable cutter had been fixed to the leading metal edge of the wings so less than 300 “kills” were attributed. The Hawker Tempest fighter was more successful (after pilot training was completed) for the interception of a novel and dangerous target while the newly introduced Meteor jet had teething problems with jammed equipment. It was left to the gunners of the R.A.F. regiment and Royal Artillery to provide resistance to the small and fast moving V1 but their efforts were not rewarded until they were equipped with the Swedish Bofors 40 mm. L60 anticraft gun the electronic fire control system of which benefited from an analogue computer. Spread in lines across the Downs, the fire power of these innovative weapons brought down several thousand of the deadly missiles with a daily success rate increasing to around 75% by the end of August 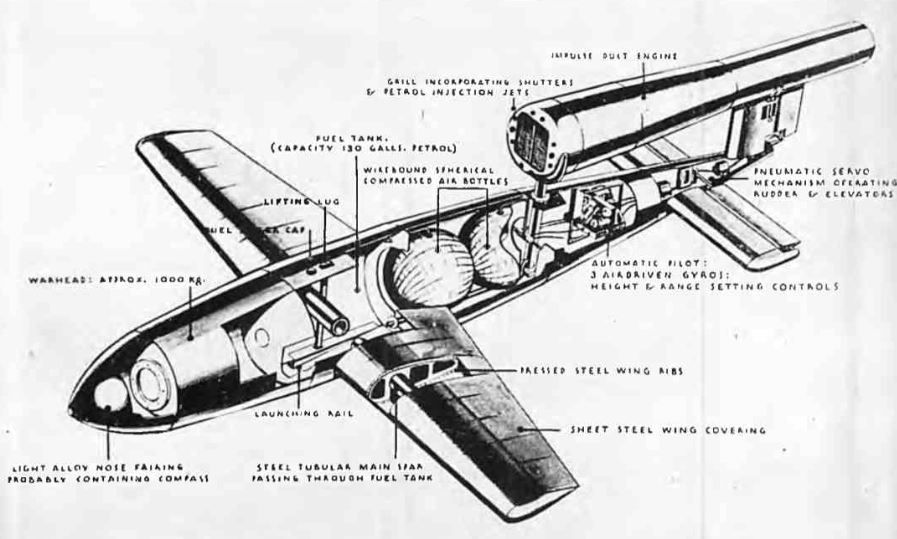 The V1 was developed at Peenemunde by German military engineers under the name Vergeltungswaffe 1 (Vengeance Weapon 1) but soon became known to the British as a buzz bomb or doodlebug. It had been designed to be carried under the belly of a Heinkel bomber but later almost all launches were made from portable ramps situated in France and the low countries. Navigation was simply controlled by two gyroscopes to correct pitch and yaw, a magnetic compass for direction and a barometer for altitude. An odometer linked by radio to the operational site provided a countdown system until the target area with a diameter of 30 km. was reached but this was soon reduced by modification to about 10 km. As the allied forces spread northwards from the D-day landings and captured many of the launching sites, the Germans were forced to launch from Belgium with a modified model which increased the fuel capacity for the pulse jet engine but reduced the size of the warhead from 850 kg of Amatol to around 500 kg. Nearly 2,500 sorties were flown with this enhanced model which could reach targets in the Midlands and as far away as Liverpool. Following the capture of Peenemunde many of the expert technicians and plans for the V1, V2 and similar projects were shipped to the USA.


Nearly eighty years later it is inevitable for one to draw comparisons between the V1 and the delta winged Shahed-136 drone which is being used so effectively by the forces of the Russian Federation in the Ukraine. The V1 used salvaged material and sheet metal for its fuselage and plywood for its wings ; total cost with propulsion and navigation equipment was one tenth of that for the much larger V2 rocket. The Shahed-136 uses similar utilitarian materials and is mass produced in Iran at a rumoured cost of around €20,000 per unit. Although slower and more cumbersome than the V1 it has a similar effective use as a kamikaze weapon which can be used in swarms in the belief that at least 10 to 20% will reach target areas. The existing Ukrainian artillery had a poor success rate but the import from Germany of the Iris-T anti-missile system has improved things immensely but at a cost of €450.000 for each unit. Moreover, their number has been limited to what the western allies consider to be necessary for defence and reflects the caution expressed generally by EU countries concerning the supply of expensive , sophisticated weapons which can also be used for attack.


The Russians are thought to have set up their own factories to manufacture similar models in the belief that the relentless bombing of both military and civilian installations by unmanned vehicles is more likely to force the settlement of territorial gains in the eastern provinces. It may also improve morale at home which has been shocked by the appalling loss of life and equipment which has resulted in the pursuit of antiquated tank and artillery warfare.


Of course, drone warfare in the form of unmanned combat aerial vehicles (UCAV) which are capable of dropping bombs and firing missiles has been part of the armoury of many countries in the 21st century ranging from the US to the militant Houthis of Yemen. Like the doodlebug, the Shahed-136 is being used as a cheap terrorist weapon which inflicts widespread collateral civilian damage. All of the major players in these awful conflicts have in their arsenals more sophisticated but expensive models of drones which can survey, pinpoint and destroy military targets and assassinate individuals but they have been kept in reserve by the Russians in the hope that this latest missile will subdue the Ukranians (many living without power and water) into agreeing a settlement whereby they will cede their occupied territories in return for reparations to rebuild their shattered economy.


The Ukraine has had for many years a successful but corrupt armaments industry which is capable of hitting back at Russian territory with home produced missiles. In recent weeks it has produced an innovative “sea drone” which is simply a jet ski fitted with fenders containing high explosive and extra fuel which has been launched in the Black Sea against warships and vessels carrying supplies to the military.


It is spine chilling to view (as if it is some part of a horrible video game) killing machines controlled by disinterested operators safely located perhaps thousands of miles away who are ordered to assassinate electronically located targets identified only as images displayed by video camaras. But worse is to come with human operators being replaced by artificial intelligence as has already happened in Libya in year 2020. What is happening in Ukraine, Yemen, Afghanistan, Syria and other theatres of insane war seems to be a rehearsal for an “Armageddon” desired by the global elite seeking an ordered new society. Or is that yet another conspiracy theory so beloved by the social media?

The Exploitation of Portugal´s Mineral Resources

Portugality : New films not to be missed

The gross profitability of Big Pharma : 2

The Exploitation of Portugal´s Mineral Resources

Portugality : New films not to be missed

The gross profitability of Big Pharma : 2

How to Avoid a War With China

A Bad Case of Cultural Lag

Another day in paradise

Return of the Alliances

War: We Are Not Children

In the world of motoring, the main beauty of retro is - it actually works!

Will Porto be the main terminal for international rail services?

From Doodlebugs to Drones