With Ryanair's help they are off the ground and flying.

In August 2018 the Serra de Monchique had the worst fire in Europe. In just one week a massive 28,000 hectares were burnt down which had a devastating effect on the local community, the natural habitats and the species that live there.

By 2019 however, a renaturalization project called Renature Monchique was already underway.

But how did it happen so fast?

Well, this was exactly the question I asked João Fernandes, the president of RTA (Região Turismo do Algarve), when I interviewed him about it back in 2020. The project was in its second year and they had already replanted an impressive 62,000 trees.

President Fernandes explained it was all a question of bringing the right partners together.

Ryanair CEO, Michael O’Leary, was in the Algarve at the time of the fire and witnessing the devastation wanted to help. The low-cost Irish airline runs a ‘Carbon Offset Initiative Programme’ that passengers can donate to when they book a flight and that goes into funding their various climate projects - and they wanted to make renaturalizing Monchique part of it.

João Fernandes recalled that when Ryanair first contacted RTA they were quick to put them in touch with the ICNF (Instituto da Conservação da Natureza e das Florestas) who in turn found out that an NGO called GEOTA (Grupo de Estudos de Ordenamento do Território e Ambiente) was already well established in Monchique, having been developing a nature project there since 2015 - but lacked the necessary funds.

Ryanair's initial donation of €250,000 back in 2019, combined with GEOTA’s local knowledge and expertise, as well as the support of all the other partners involved, meant that the Renature Monchique project was able to get off the ground (and trees got planted in the ground) in record time.

Ryanair and their customers have since donated another €250,000 for every year of the project and on the 10th of November, I was happy to attend a conference at the RTA headquarters in Faro to announce the launch of its fourth year and to find out what progress has been made since I last wrote about them.

João Fernandes kicked off proceedings by introducing everyone and thanking them for their continuing efforts towards the project. On the panel with him was the president of GEOTA, João Dias Coelho, António Miranda from the ICNF, Paulo Alves, the Mayor of Monchique and representing Ryanair was Elena Cabrera, country manager of Ryanair to Portugal and Spain.

President Fernandes then went on to explain how, being involved since the very beginning, this is a project he ‘particularly cherishes’. Monchique could be thought of as the ‘lungs of the Algarve’ and it's absolutely essential we look after it. It’s also very important for the local economy as tourists are increasingly interested in sustainable rural tourism and the stunning Serra de Monchique is a vital part of what the Algarve has to offer.

Up in the air

Thomas Fowler, Ryanair's Director of Sustainability, was unable to attend the session, but sent a video statement in which he sums up the progress:

“In the last three years, due to the contributions of Ryanair clients, Monchique has been able to plant over 200,000 trees. With Ryanair’s help, passenger donations will help plant another 75,000 trees.”

They plan to do this by March 2023 and Elena Cabrera said that this is a very important project for Ryanair and that they can count on their continuing support.

Down on the ground

During the conference, João Dias Coelho, the President of GEOTA, stressed however that it's not just a question of planting trees and forgetting about them, a lot of effort goes into ensuring that the work lasts over time.

Because a lot of the land is privately owned, from the very beginning the team at GEOTA have been working closely with local landowners and farmers to explain the dangers of investing in fast-growing species, which are not native to the Algarve. 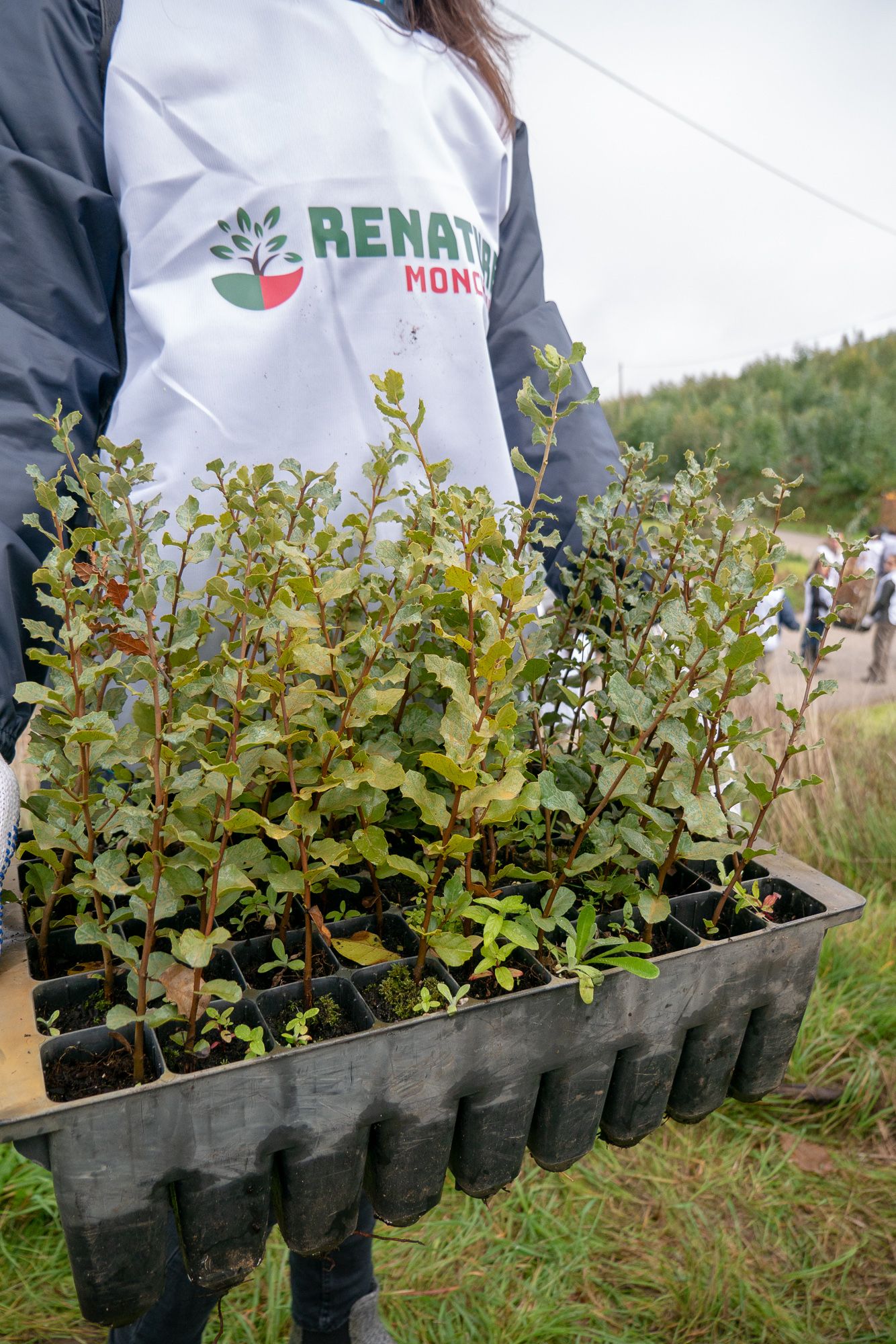 There’s a financial incentive for them to use their land to grow eucalyptus trees, for example, that can be grown quickly and used in the construction industry as well as to make paper - but are native to Australia. Although perfectly fine here and there, when bunched together they not only outcompete their neighbours for resources but are also highly flammable and their leaves blowing in the wind help spread the fire.

GEOTA have therefore been presenting the advantages of growing native species. There’s been a special effort to replant the majestic Monchique oak, a tree emblematic to the region which has become critically endangered. But they have also been re-planting cork oak trees, chestnut trees, strawberry trees, Portuguese oak trees, European ash trees and European elders.

Oak trees once established, and especially wrapped in their cork jackets, are extremely fire resistant. And, as for farmers looking for a crop they can harvest more quickly, the strawberry tree takes a lot less time to mature and can be used to make the infamous firewater ‘Medronho’, that Monchique is so well known for.

Working together for a bright and treeful future

Everybody is extremely grateful to Ryanair and their passengers for their continuing support. The project is a mix between private and public entities and everybody agreed that its success is a testament to what can happen if the right groups of people work together.

It’s an ongoing project, and I may have got myself an invitation to go to Monchique one day to see the tree planting in action and to find out more. Stay tuned.

The tree planting in Almeria Spain I saw had 1% survival rate at 2yrs , planting is the easy bit , keeping them alive to 5yrs is the challenge .

It is wonderful to hear that the RyanAir airline company has been helping to fund the costs of tree planting and restoring the environment in the Monchique area of Portugal.

All the other trees- actual great news- but Eucalyptus? For real?? We all know Eucalyptus burns easier tan other trees, so why keep making same mistakes? (Oh, for making paper for “Navigator” brand, which is used in every fancy office? Cry me a river.)

Many people know that eucalyptus trees have many impacts. I just add my two cents, maybe four! First the positives: eucalyptus trees grow very fast and they are a cheap and practical source of wood for paper mills and construction. Also, eucalyptus leaves oil has health benefits and the evergreen trees provide shade and a pleasant smell.
However, the negative effects of introducing eucalyptus are also critical, and in certain areas they should be ruled out! The most relevant ones are: eucalyptus trees deplete the soil of nutrients affecting its use for other purposes; increase soil erosion; reduce groundwater availability and decrease creeks, streams and rivers flow; affect water reservoirs; acidify soils and solubilize soil nutrients and consequently reduce agricultural yields; destroy local ecosystems by out-competing local vegetation and fauna (we don't have koalas here!); and as their roots grow horizontally, they may affect many features around the house such as septic tanks, water tanks and reservoirs, sewer and utility lines, foundations, and water wells. Finally, be very careful, Eucalyptus trees burn even better and faster than pine trees!

75,000 trees for burnt areas of Monchique

We need to ‘stork’ about this amazing bird

Another creature about to go the way of the Dodo

Would you like to be a fly on the wall in a nesting box?

A Rocha - taking care of the bright and beautiful