HomeCuriosity Ever fancied a ferret?

These little creatures belong under the species of Mustelidae, along with weasels, polecats, stoats, and ermines. Female ferrets are called ‘jills,’ males are ‘hobs’ and young are ‘kits’, and a group of ferrets is called ‘a business’ or a fesnyng (pronounced as fez-ning). Domestic ferrets come in a wide variety of colours and usually have a pink nose. Their name comes from the Latin word furittus meaning ‘little thief’. Years ago, Ferretters and their uniquely shaped ferrets were employed to flush out unwanted rabbits from holes or tunnels on farmland, as they were better predators than cats or dogs.

Today, the long, slender carnivorous animal makes an endearing, intelligent and lively pet that can be trained to do tricks like dogs. Despite their high energy, they quietly sleep, the same as a cat would, for about 18 hours per day. But when awake, they are cuddly, interactive, spunky pets who can be great if you have time to take them out of their cage daily and play with them.

Though ferret owners tend to adore their pets, ferrets aren’t right for everyone. Before you bring one into your home, there are a few things you should know.

Ferrets Smell Musky, Even When They’re Descented - Ferrets are born with scent glands near the bases of their tails. The glands are typically surgically removed by the breeder’s veterinarian when the animals are very young, before they are sold, or they would probably never sell because they smell so musky.

Ferrets Get Hairballs, Just Like Cats - Ferrets typically shed a lot of hair and can ingest this as they groom themselves. To help prevent hairballs from forming, ferrets should be brushed several times a week and, if shedding is excessive, given hairball laxatives manufactured for either ferrets or cats, by mouth, once or twice a week.

They might bite - Small nips or gentle play-biting is normal for ferrets. It is when the animal bites hard that something is awry. A ferret may bite because it simply was never taught not to bite. Perhaps it was not properly handled at the breeder or pet store.

They are Diggers - They burrow, dig, chew and steal everything — especially when they’re young — and stockpile your stuff in secret places. Electrical cords are also a potential hazard. If you are thinking of getting a ferret, plan to supervise him whenever he is out of his cage, and make sure you ferret-proof an area in your home where he can safely run around, minus stuff he can collect!

Wild ferrets typically hunt for and eat rodents and rabbits, and even pet ones are exclusively meat eaters and are unable to digest plant material, so a diet of high-protein food that is moderate in fat and low in carbohydrates is needed. Several commercially prepared kibble diets are made specifically for ferrets and are readily eaten by them. 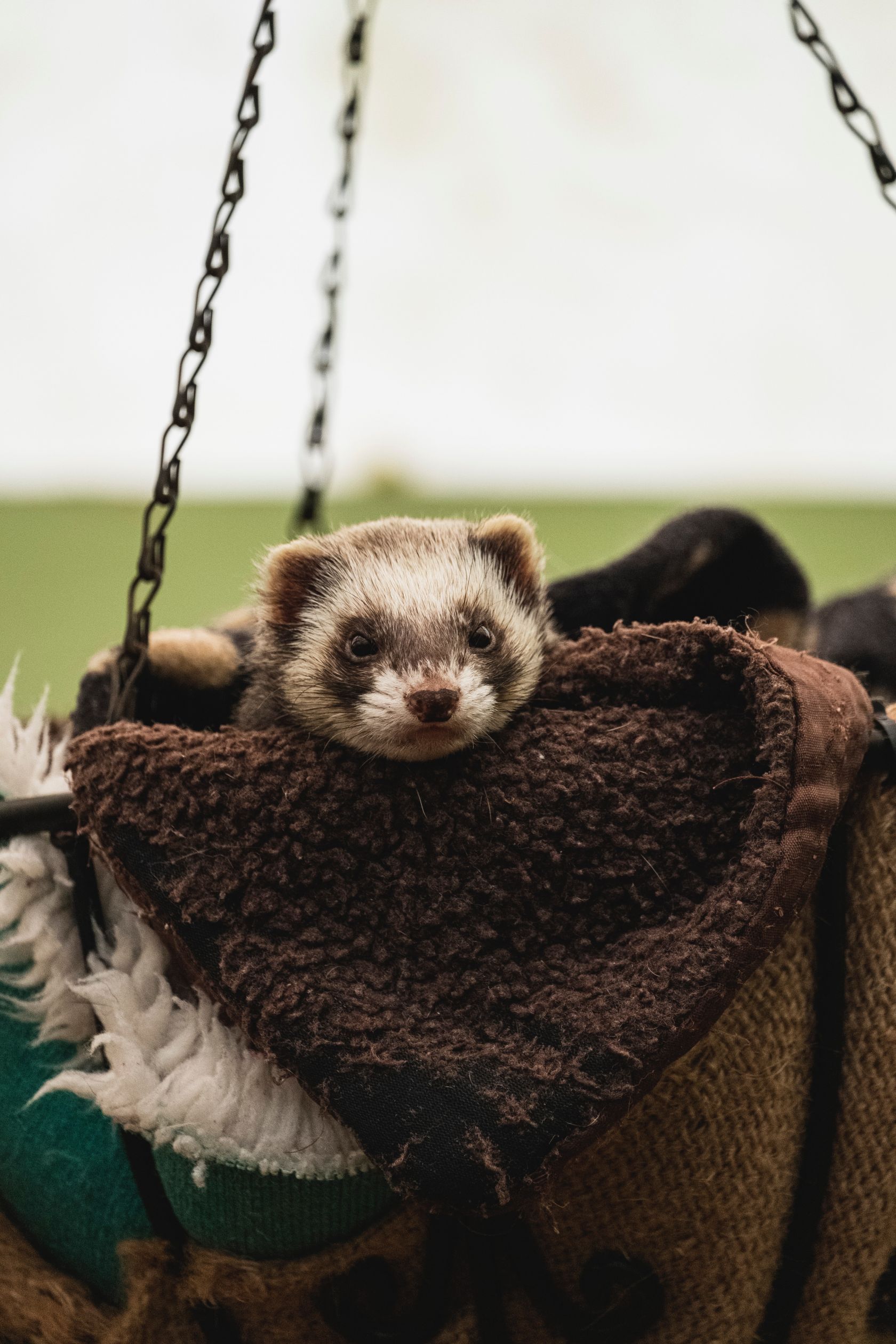 Ferrets Need Friends - Generally, ferrets are social creatures who usually seek out the company of their human family or other ferrets. For this reason, many ferret owners end up getting more than one, with any female being ‘fixed’. Of course, like other types of pets, not all ferrets will get on, so multiples will need to be closely watched together over several days for progressively longer periods before leaving them alone. Also ensure that each ferret has equal access to food, toys, and hiding and sleeping places so that they don’t fight over resources.

Ferrets Should Be Vaccinated and Chipped - You will need a Pet Passport, and the law requires that they be vaccinated and chipped - indoor pets can also come in contact with wildlife, like bats, which can carry the rabies virus.

A ferret can make a terrific pet but they do require a lot of attention and some space in which to run around. They also generally need more care — including medical care — as they age. Given that they can live as long as 9 to 10 years (on average 6 to 8), they are a long-term commitment. If you’re prepared to stand by your fluffy friend for that long, a ferret may be just right for you.

As an EU, EEA non-resident, are you obliged to appoint a fiscal representative in Portugal?