Well, you could go down to the Oficina Mar Vivo and see if nautical carpentry floats your boat.

I had got wind of the fact that a social integration project called the Oficina Mar Vivo was in the process of building a beautiful wooden canoe and it was going to be displayed at a social fair in the centre of Loulé. I passed by and was delighted to discover the fabulous vessel and, although I didn’t find the man you might call ‘the captain of the enterprise’, Carlos Sonderblohm, I decided it was just as well as it gave me an excuse to go down to the fishing port in Quarteira where it was being constructed to find out more…

A week or so later, I arrived at the port and walked past lots of old hard working fishing boats, seagulls and cats until I caught sight of the canoe which I was pleased to note had made it back to the workshop and was once again safe and sound under its tarpaulin. Here I met ‘Captain Carlos’ and a lovely lady called Catarina who were the only ones left that afternoon working away on their boat.

Before he showed me around, I sat down with Carlos at a table (that they had just finished building) for coffee, delicious almond and fig flower treats (made by Catarina) - and a chat about how this all came to be. 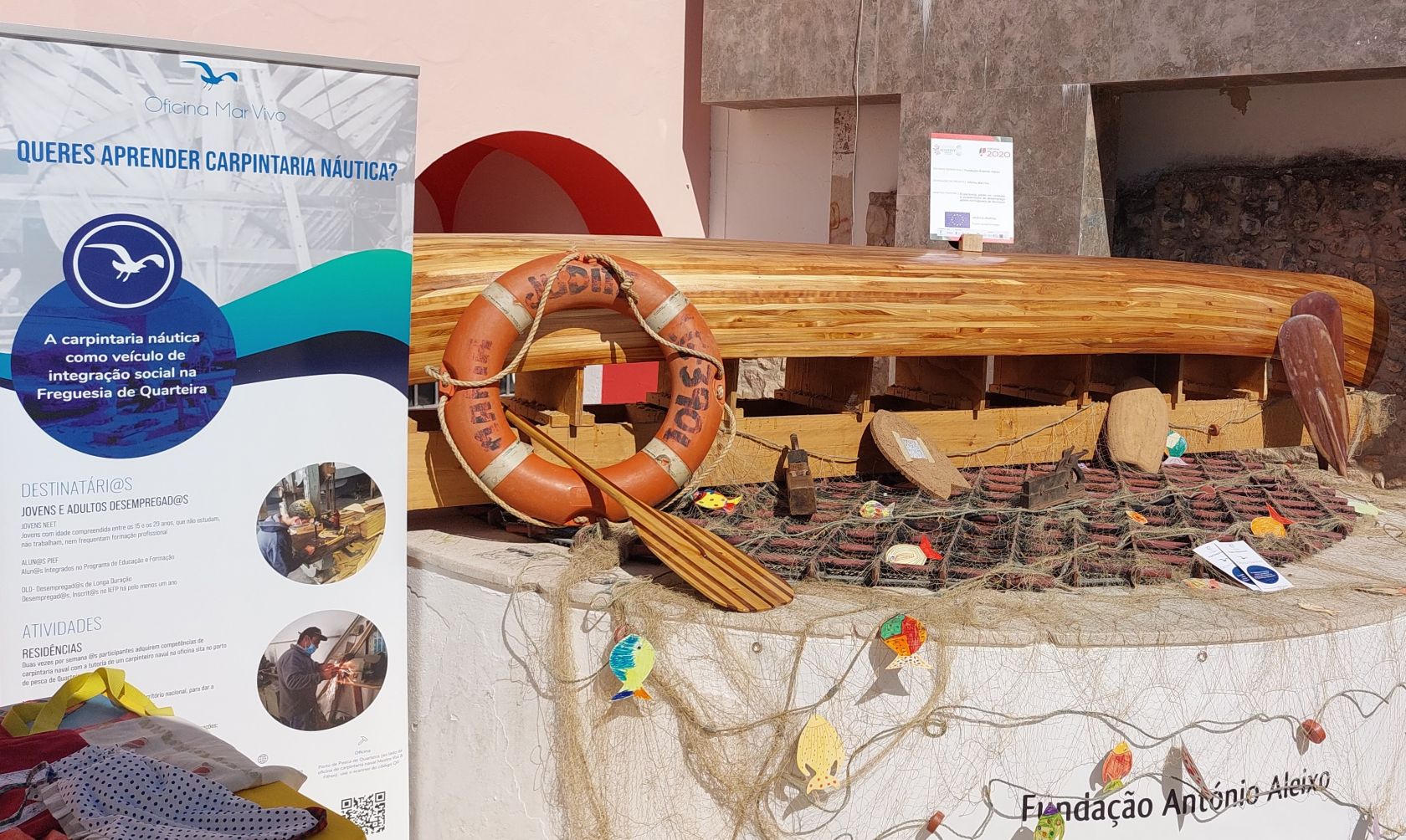 Carlos is from Venezuela. He came to Portugal in 2008 and studied fishery support and aquaculture at the Universidade do Algarve and is a Natural Resource Management Expert. But he’s also always enjoyed working with wood and being a surfer, he has built several surfboards and has worked in a boat yard in Vilamoura, as well as a wood workshop in São Brás de Alportel.

From what I understood, he’s been busy recently helping Cabo Verde decide what kind of fishing boats to build to be able to fish sustainably - but he still finds time to come and teach at this project on Thursdays and Fridays.

Show them the ropes

The Oficina Mar Vivo began in 2020 and is a 2-year pilot project by the Fundação António Aleixo. It gives school kids and unemployed people in Quarteira the chance to go down to the fishing port two days a week and try their hands at nautical carpentry. 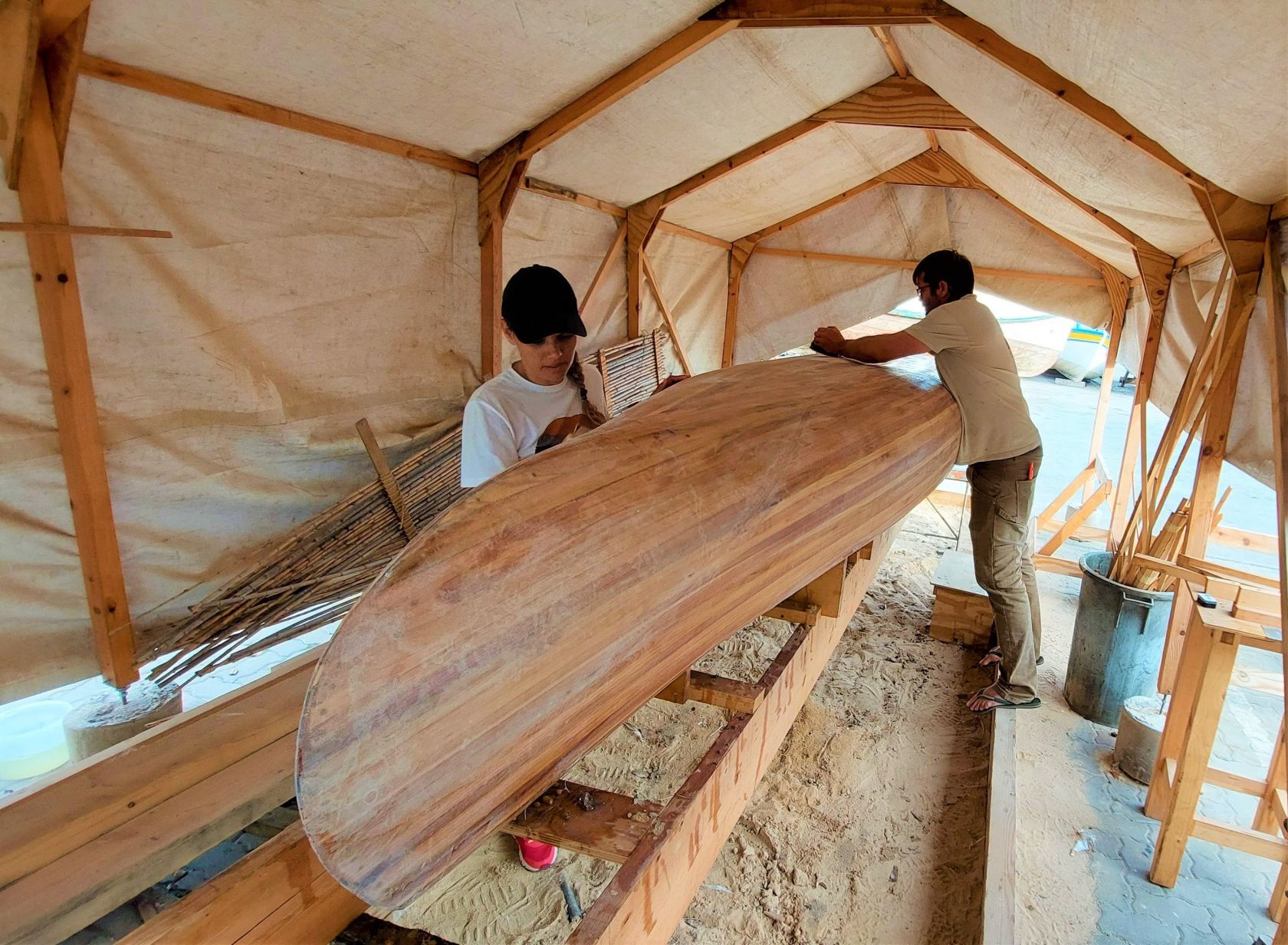 But that's not all they can learn. The Oficina Mar Vivo also run workshops where they enlist the help of people like the onsite master mechanic and welder who, since the majority of young people these days go into the tourism sector, are sorely in need of some eager apprentices.

Basically, you can learn a bit of everything here and the idea is to provide the opportunity for people to try it out and see, well… whether it floats their boat.

Just row with it

Carlos admitted that it hasn’t all been smooth sailing. Indeed, the original plan was to build 3 canoes. But alas, generally people only attend when they have to and the process has been slow going.

But there have been some success stories. I met two of them. One was Filipe, who at just 21 years old attended one of their workshops on boat mechanics and showing great promise and willingness to learn is now employed there and was in the middle of fixing an engine. 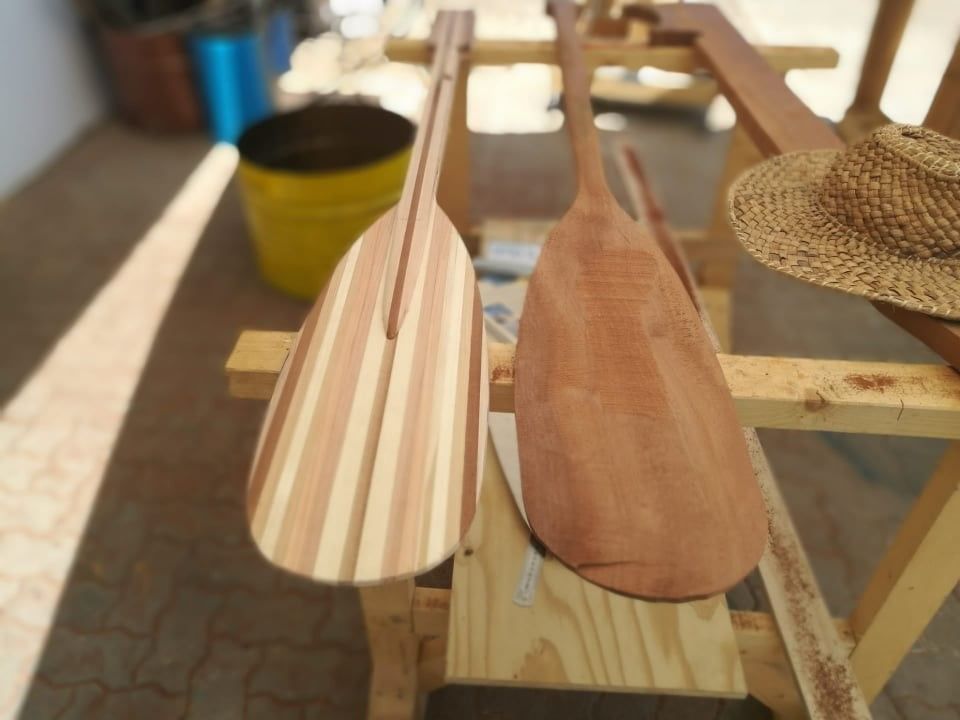 And the other was Catarina who I had met when I arrived. A chef by profession, she has a young son and finding herself unemployed she took her boat driving licence and wanted to find out more about the nautical world and to use her free time constructively - and how better than to get on board with building a canoe.

Of course, another reason it took so long to get the canoe underway is that they had to build their workshop first. I was very impressed by the fact that they had made everything themselves, including a barbeque to cook up the day's catch. Before getting started, they also had to build the tarpaulin to keep the canoe safe and dry, as well the moulds to give it its shape - and they had even made the most beautiful paddles, as well.

Carlos explained, much to my amusement, that it made sense to make them now as when the canoe is finished, they will be far too excited to get it in the water. But it was also, he admitted, good practice and allowed any would-be nautical carpenters to get a feel for what it's like to work with wood.

Carlos is full of ideas and passionate about getting youngsters involved in various parts of the local fishing industry that he says is in danger of drying up if there’s nobody to take over.

It's been an upstream journey, but he’s also very much enjoyed the experience and whether the project gets renewed or not, he’s grateful for the community spirit they have created down there - and happy to teach anybody who wants to learn.

I can’t wait for the day the canoe finally gets put in the water and if you don’t want to miss their happy smiles when they climb aboard and row merrily down the stream - then please, follow them on Facebook @Oficina Mar Vivo

This is a great and unique project for anyone who wants to learn so many skills. I hope this industry thrives.

A trip of a lifetime