Graham Morgan, 60, has successfully attempted a World Record for the number of chin-up repetitions completed in 24 hours with an extraordinary 7,481 and has raised an incredible €7,886 for Save the Children!

It was fantastic to speak with Graham Morgan who tackled a ‘chinups4children’ marathon, achieving a new chin-ups world record attempt on Sunday 20th of November, 2022.

Graham has been living in the Algarve for 25 years, in which he told The Portugal News that “I originally came to work at a sports complex in Vale do Lobo, working as a sports director. Following this, I set up on my own as a personal trainer and fitness expert around the Quinta do Lago area. I started helping Quinta do Lago build a lifestyle brand, in which I set up a gym called Active Q for 12 years, once the Campus opened, I moved there, where I am working as the operations and fitness manager”. 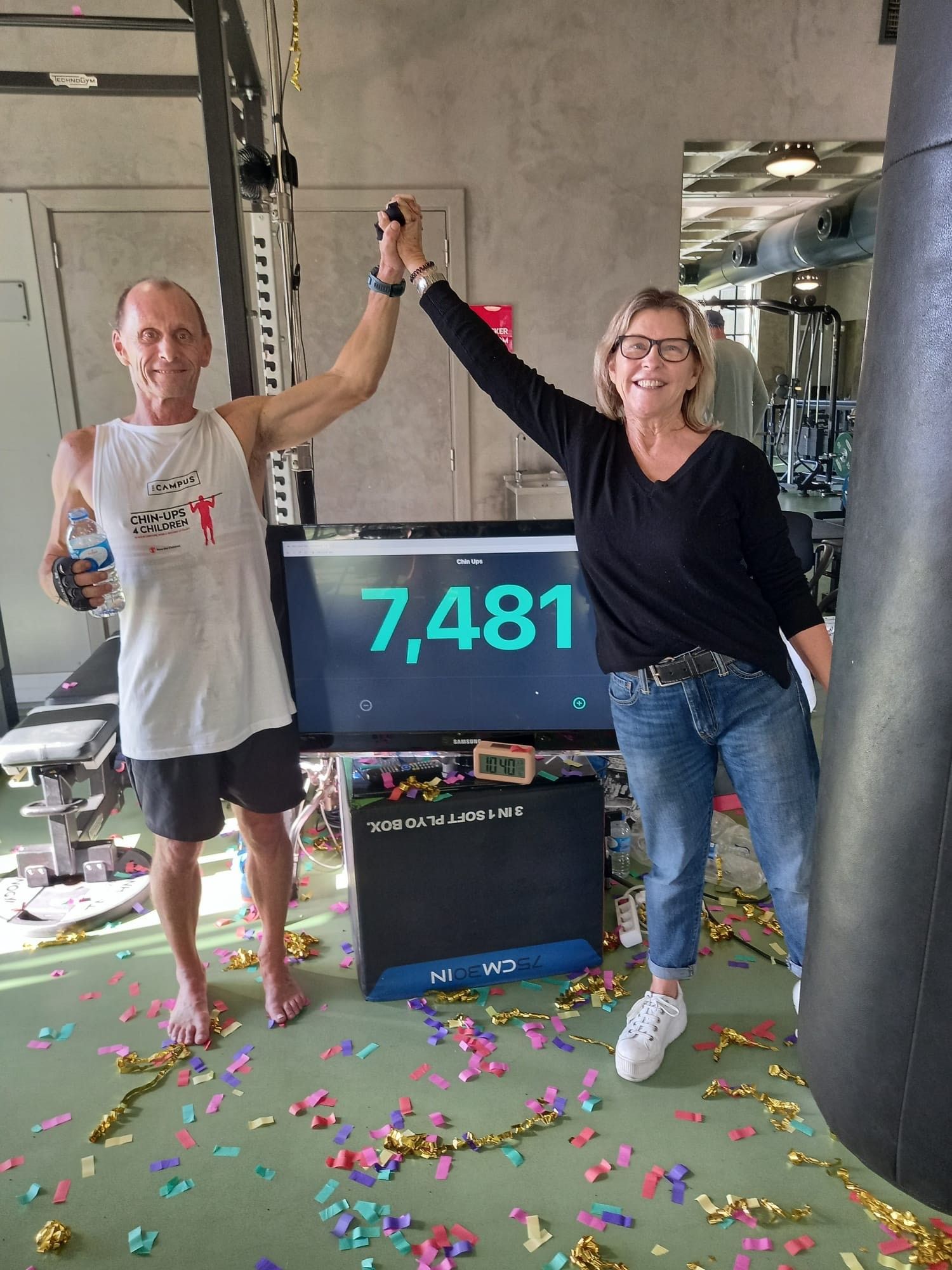 When asked why he decided to take on such a challenge, he told The Portugal News: “When I turned 60, I wanted to set myself a challenge just to prove that even though you might reach 60, you don’t have to stop doing what you are doing and you can set yourself goals and go for them!” Which he jokingly added “even if they are slightly ridiculous like this one was!”.

“During the lockdown, I started doing some chin-ups as I wanted to keep fit and this continued when The Campus opened again. It actually was my son who joked that I should go for the chin-up World Record but I thought it was potentially achievable if gone about the right way, as at the time, the target set was 5,340 in 24 hours.”

Graham told The Portugal News that “In terms of training, initially it involved building strength, and basic muscle protection as well as weight training in order to build performance resistance to the technique to prevent injury.” Adding that “Gradually, I built it up to the point where in August, I was focusing on volumes of chin-ups and dips. I have done in the region of 35,000 chin-ups since August, building up in quantities over the weeks and months so that I got myself into a reasonable condition to go through to beat the record.”

Fundraising for Save the Children

Alongside this incredible fitness challenge, Graham decided to fundraise for Save the Children. He told The Portugal News that he decided that “with children being displaced in Ukraine and all the problems in Afghanistan and around the world” that he would aim to raise money for the charity, in which he has so far raised €7,886. “They are the future and every child should be given a chance to fulfil their potential, then that’s got to be worth fundraising for.” Graham originally tried to get the masses involved, “with people filming themselves doing chin-ups and donating to the charity but that didn’t really get off the ground.” “In the end, it became more focused on me trying to break this record and raise money through that.” 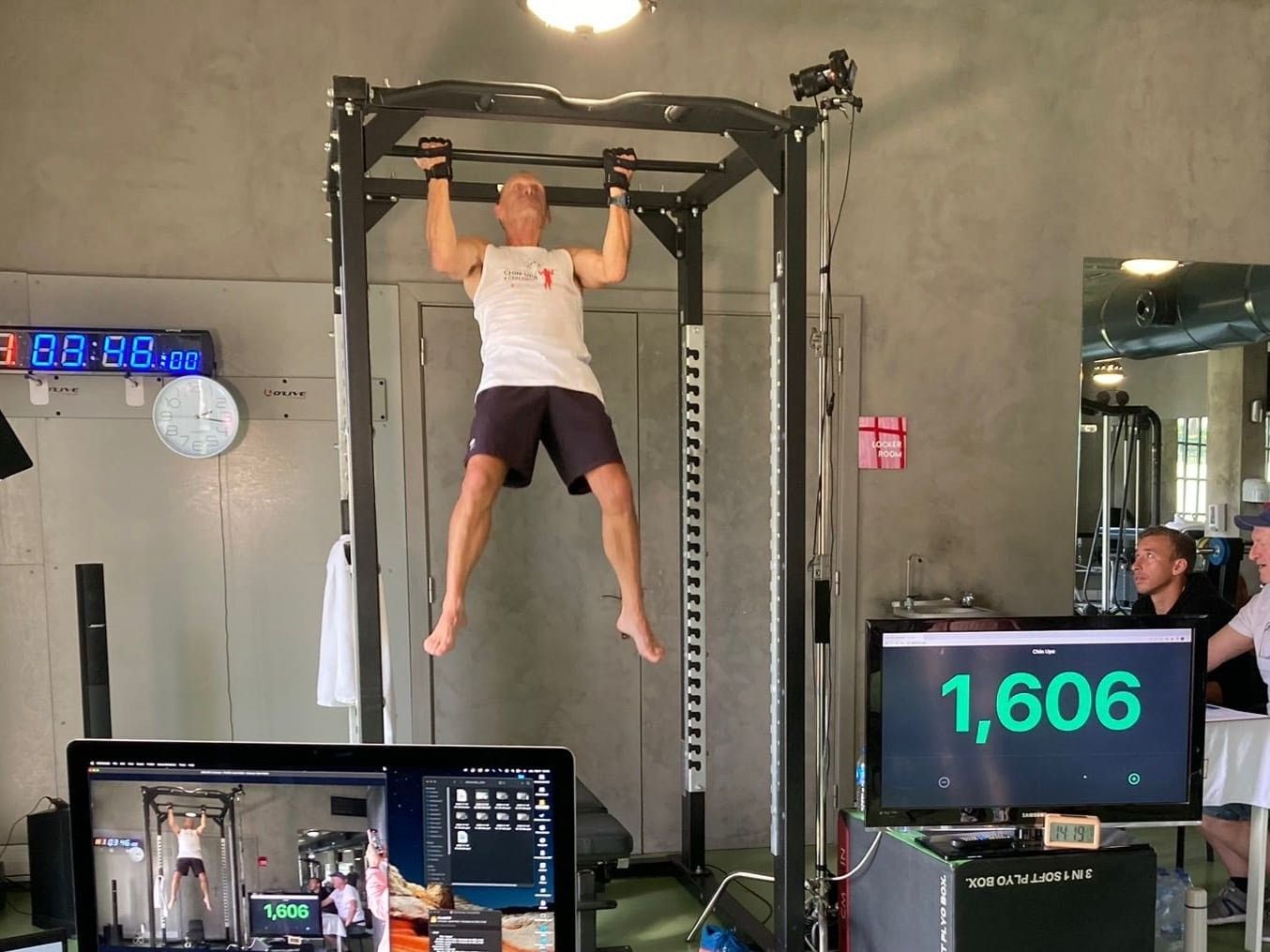 Graham faced a few obstacles but that did not deter him, he explained that “I had structured my training with the plan to beat the record of 5,340 in 24 hours, so I was trying to do 6,000 chin-ups for 60 and around two weeks before the challenge, I managed to do 4,000 in 12 hours so I was feeling confident to get to 6,000.”

However, Guinness World Records later contacted Graham about the record being broken in America, “so suddenly, the number to beat was 6,757 so I had to re-strategize so later I went to re-schedule my date and I found out it went up to 7,087 so now I was going into an unknown territory. I was excited to start on the day mostly knowing that this madness would be eventually over.” 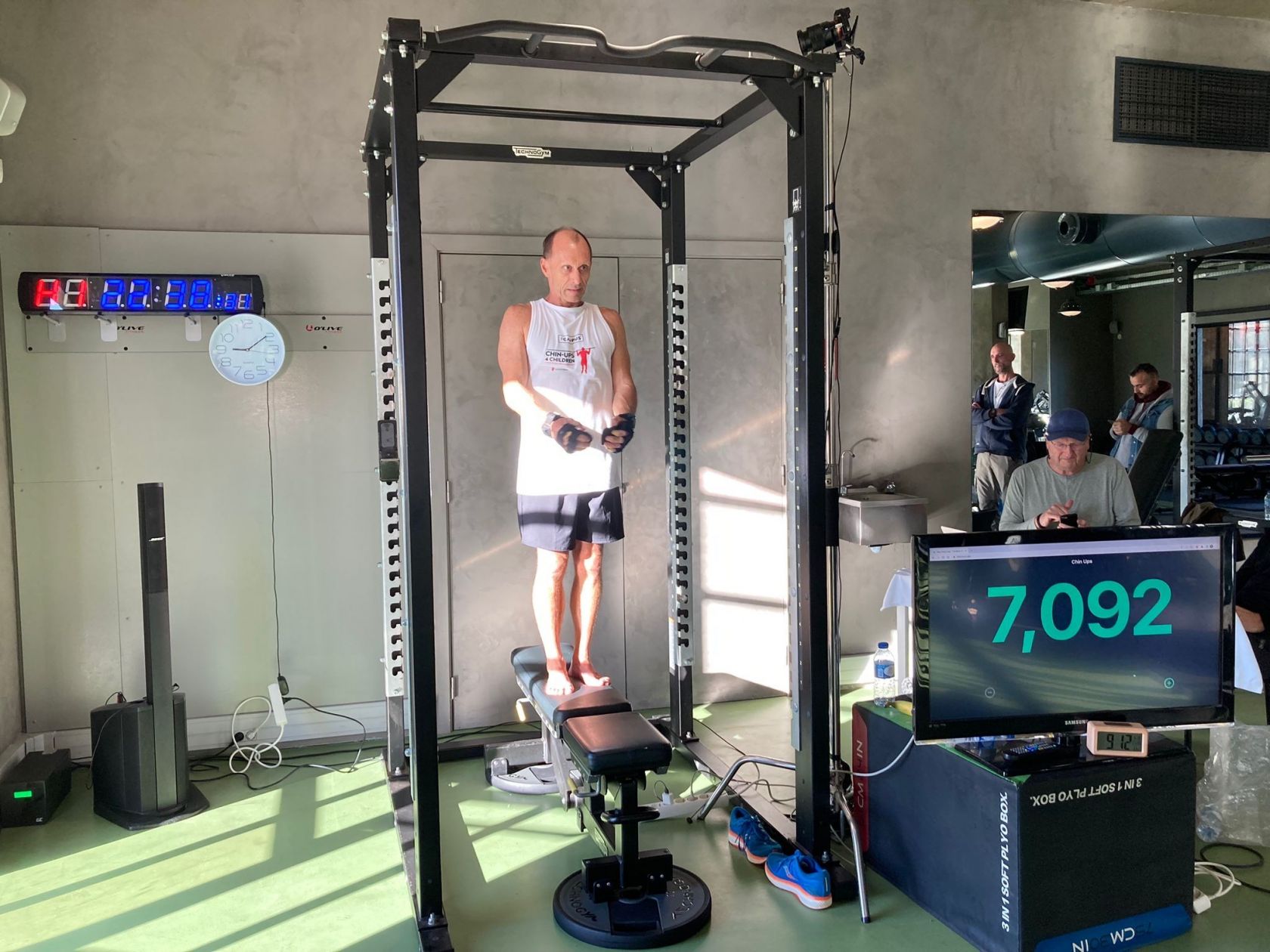 It was evident speaking with Graham, his dedication, hard work and careful training plan made it all possible for him to achieve a World Record (which is still waiting verification) but he also told The Portugal News that the support he received, also made setting a potential new World Record a reality.

“We had to have the chin-ups marathon videoed from at least two angles, one from the front and the other from the height of the bar, we hired a video company who were excellent and also had a backup camera just in case.”

“We had to have two witnesses at all time, a visible digital counter, a manual clicker as well as a log book record as the visual records of the count. I had a team of 12 witnesses who all worked shifts throughout the 24 hours, some coming in at terribly antisocial hours. I think in the middle of the night, they almost had a worst job than me.” Further adding “My wife supported me and my son who is in America, stayed up watching as I had a live video on Facebook, with people watching from Australia and Canada. We really had a nice gathering of people so it all finished quite well.”

All that remains is for everything to be finalised and the attempt to be verified by Guinness. Graham also confirmed that “Speaking with the charity, they love the concept of chin-ups for children so we hope to develop it further and do something in the future with it and hopefully make it more of a mass participation. Jokingly adding “I am sort of waiting for the pain in my arms to stop before I make another commitment but I would love to get loads of people involved, anyone can do chin-ups anywhere, even just doing one is a huge sense of achievement.”

If you would like to support Graham’s fundraising initiative, there is still time to donate to www.justgiving.com/fundraising/chinups4children. For more information about Save the Children please visit www.savethechildren.org.uk/. You can also follow Graham on Instagram @chinups4children for any updates.

Strike notices at highest number since 2013