It was a pleasure speaking with Portuguese-American writer Millicent Borges Accardi all about Portugal’s influence on her poetry collection “Through a Grainy Landscape”.

It was a pleasure speaking with Portuguese-American writer Millicent Borges Accardi all about Portugal’s influence on her poetry collection “Through a Grainy Landscape”.

Millicent Borges Accardi is the author of four poetry collections and her awards include “Fellowships from the National Endowment for the Arts, Fulbright, CantoMundo, Creative Capacity, the California Arts Council, Foundation for Contemporary Arts (Covid grant), the Corporation of Yaddo, Fundação Luso-Americana (Portugal), and the Barbara Deming Foundation, "Money for Women."

Millicent told The Portugal News: “I discovered that Portuguese and Portuguese-American literature had not found a foothold in the US, I became determined to write about my own heritage and to bring Portuguese literature to the forefront of mainstream America, devoting the past 15 years to the Portuguese community.”

“In 2013, I was invited to give my paper, "Narratives of Those Who Left and Those Who Stayed Behind" at the Neither Here nor There conference at the University of Lisbon and to present my essay, “Fee Fie, Foe, Fum: Terror in Portuguese Fairy Tales,” at the Images of Terror, Narratives of (In)security: Literary, Artistic, and Cultural Responses conference at Universidade de Lisboa.”

When asked if her dream was always to become a poet, Millicent response was that “It seemed inevitable that I would become a full-time poet, seeing as I was named after the Angel of Poetry, Millicent Rogers, after the library in Fairhaven MA. The story goes, that my mother used to go to the library as a child and sit under the stained-glass window of the Angel of Poetry and ponder that she would call her child Millicent.

“I grew up loving books and writing and also spending an inordinate time at the library. However, it is nearly impossible to make a full-time living as a poet. So, through the years I have taught college writing workshops. I also mentor other writers and write grants, technical writing, and instructional design, and I write interviews and book reviews for a variety of publications (some that pay, some that don’t, so I have cobbled together a living of sorts, surrounded by books and writing.”

Millicent lives with her husband which she calls “a hippie check on a seasonal creek in Topanga canyon, a little paradise halfway between Los Angeles and Malibu. It’s a rural hideaway miracle in the middle of freeways and cities in the Santa Monice mountains of Southern California.” When asked about her connection to Portugal, Millicent told The Portugal News that “My family was originally from Terceira, The Azores. My grandparents immigrated to the United States and ended up in New Bedford MA, where my father was born.”

Millicent explained: “As a kid, we attended festas and bullfights in Artesia and also went to Portuguese restaurants like The Navigator in San Pedro. All of these cities had Portuguese areas but not like other areas such as Newark New Jersey or San Jose, CA. My father’s first language was Portuguese and it was not until he went to school that he learned English.

“As an adult, my connection to Portugal has come from visits to Lisbon (where I have participated in a number of conferences and workshops). I felt as if I had found a home when I first stepped off the plane in Portugal.” 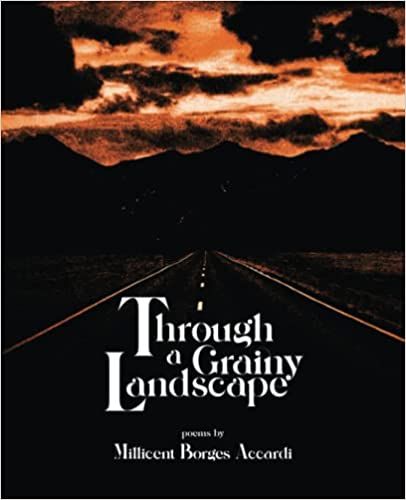 Inspiration behind “Through a Grainy Landscape”

Millicent revealed that “Through a Grainy Landscape” was inspired by lines from contemporary Portuguese writings in which she notes “I was primarily influenced and inspired by “Poems from the Portuguese”, a comprehensive anthology of 21st century Portuguese poetry, conceived by Ana Hudson, sponsored by Centro Nacional De Cultura.

“I had discovered a number of wonderful Portuguese poets, through my visits to Portugal and research, as well as the interviews I do for the Portuguese American Journal where I interview writers and artists, both Portuguese-American and Portuguese-Portuguese.

“The poetry inspired me to connect with my Portuguese-ness, so I selected 50-100 lines to draw me in from Portuguese poems and begin to do these “free writes” until I had enough poems to put together a collection. The title Through a Grainy Landscape comes from this quote by Tiago Araújo, “I’ve driven all night through a grainy landscape, on a motorway with dim and orangey lights”.

A short synopsis of what readers can expect from the collection reads: “Millicent Borges Accardi adds luster to her acclaim as a leading poet of the Portuguese-American experience with a new collection of breath-taking scope. She inhabits the new artistic frontier in exploring what heritage means to those descended from immigrants long established in the place of their dreams-"a dark mixture of all I have lost. This collection of poems is as lush and volcanic as the Azorean landscape, grounded in earthiness, rich with the yearning for the sea, and seasoned with saudade.”

The life of a poet

When asked about the life of a poet and what it entails, Millicent revealed that “I currently work as a technical writer and poetry mentor, often leading workshops as a visiting poet onsite or via Zoom at libraries and universities.”

I suppose the romantic version of the lifestyle is that I mostly made do and that every day is an adventure. Sometimes I stay up all night writing or working on a project and sleep in while other days I am up at 5am. But most days are different. When I get a grant, on the occasional burst of good luck? I travel or go to a residency where I can explore and do research. I’ve been to residences in The Czech Republic, Portugal, and Spain. I try to let the work guide me in what direction to go.

Other times I have to work 2 or 3 jobs to save up enough money to “take off” to write again. A good friend of mine said that when he stops working a day job it always takes him 2-3 months to settle back into the writing—for me it does not take that long but there is definitely a settling-in, to clearing one’s mind.

What does the future hold?

To close the interview, I asked what readers can expect from the author in the future. Millicent explained, “I am giving readings mostly on Zoom to promote the book, Quarantine Highway, and next spring I will be appearing on a panel at the AWP (Associated Writing Programs in Seattle and perhaps a residency in North Carolina after that.”

Further revealing “It’s been a little challenge promoting a book when the world is just now starting to pen back up again and I’d love to book readings in Portugal, perhaps in 2023? Or 2024?”.

On the creation side, I am on the brink of a culmination of the past 20 years of discovery and writing, a manuscript, with the working title of The Three Marias Redux, my own version of a 21st-century poetic response to the feminist breakthrough genre-hybrid book, The Three Marias (1972). Told through a related sequence of lyrical poems, fragments, monologues, and erasures. The Three Marias Redux will cast a long shadow on gender inequality and Portuguese culture.”

You can grab a copy of Quarantine Highway (2022) and Through a Grainy Landscape (2021) on Amazon.com or alternatively Amazon Spain. For more information about Millicent Borges Accardi please visit http://www.MillicentBorgesAccardi.com and @TopangaHippie on Twitter.

How much will retirement cost you after inflation?