“If you’re feeling ill and you can’t eat anything, you can always eat a piece of dry toast,” she adds. “And then you get a bit better and you want some butter on it. The next morning it’s got marmalade on it.”

During lockdown, she’d find leftovers of her big chicken casseroles ended up on toast. “I began to realise that everything tastes better on toast.” So, in her new book, readers can expect the likes of figs, blue cheese, thyme, and honey on bloomer, Japanese chicken with katsu curry sauce on white toast, and peppered steak and salsa verde on sourdough.

Crucially, many are cheap to make. “We’re all very busy and we’re all worried about money and worried about time. Assembling something on toast is easy, stress-free, and doesn’t have to be expensive,” Leith says. Her favourite – scallop Caesar on fried bread – is a little more special though.

“I never thought salad on top of bread would be good, but it is. For lunch, it’s just delightful. When you think of Caesar salad, it usually has croutons in it, so instead of having fried croutons, I put a big fried piece of bread underneath.”

Many home cooks won’t necessarily need a recipe for some of the combinations, and unlike baking, there’s no science to making great toast. “When I usually write cookbooks, I say to the readers, ‘Just trust the cookery writer and do exactly what it says’. Because many cooks make the mistake of thinking, ‘Oh well, if one tablespoon of sherry is good, three will be three times better’. But with this book, it’s more about ideas.”

After all, bread is having a moment. “The book opened my eyes to how many artisan bakeries there are now, and how even in supermarkets there’s a mass of different, really good breads,” she says.

“I don’t really expect the reader to have 20 different breads, but I do think it would be good if it encouraged them to buy ciabatta one week, focaccia the next week, a seeded brown…”

1. Preheat the oven to 200°C/Fan 180°C/Gas Mark 6. Put the walnuts on a baking tray and into the hot oven for five minutes to toast. Or toast them in the microwave for five minutes, giving them a stir halfway through.

2. Chop the stalks of the parsley, which have a lot of flavour you don’t want to waste, with a sharp knife. (Chopping in the machine can result in stringy bits – better to start by hand.) Put them, the parsley leaves and garlic into a blender and chop briefly.

3. Then add the Cheddar and walnuts and blend again. At this point, you will need to add the oil to loosen the paste. When everything is in, blitz to a smooth-ish sauce and season with salt and pepper.

4. Toast or grill the focaccia pieces to warm them through, then spread with the pesto and overlap the tomato slices on top.

Tip: The pesto will keep for a couple of weeks in the fridge if stored in a jar with a little more oil on top to keep the air out. But it will lose its brilliant colour, sadly. To make it vegan, use vegan Cheddar or any other hard vegan cheese. 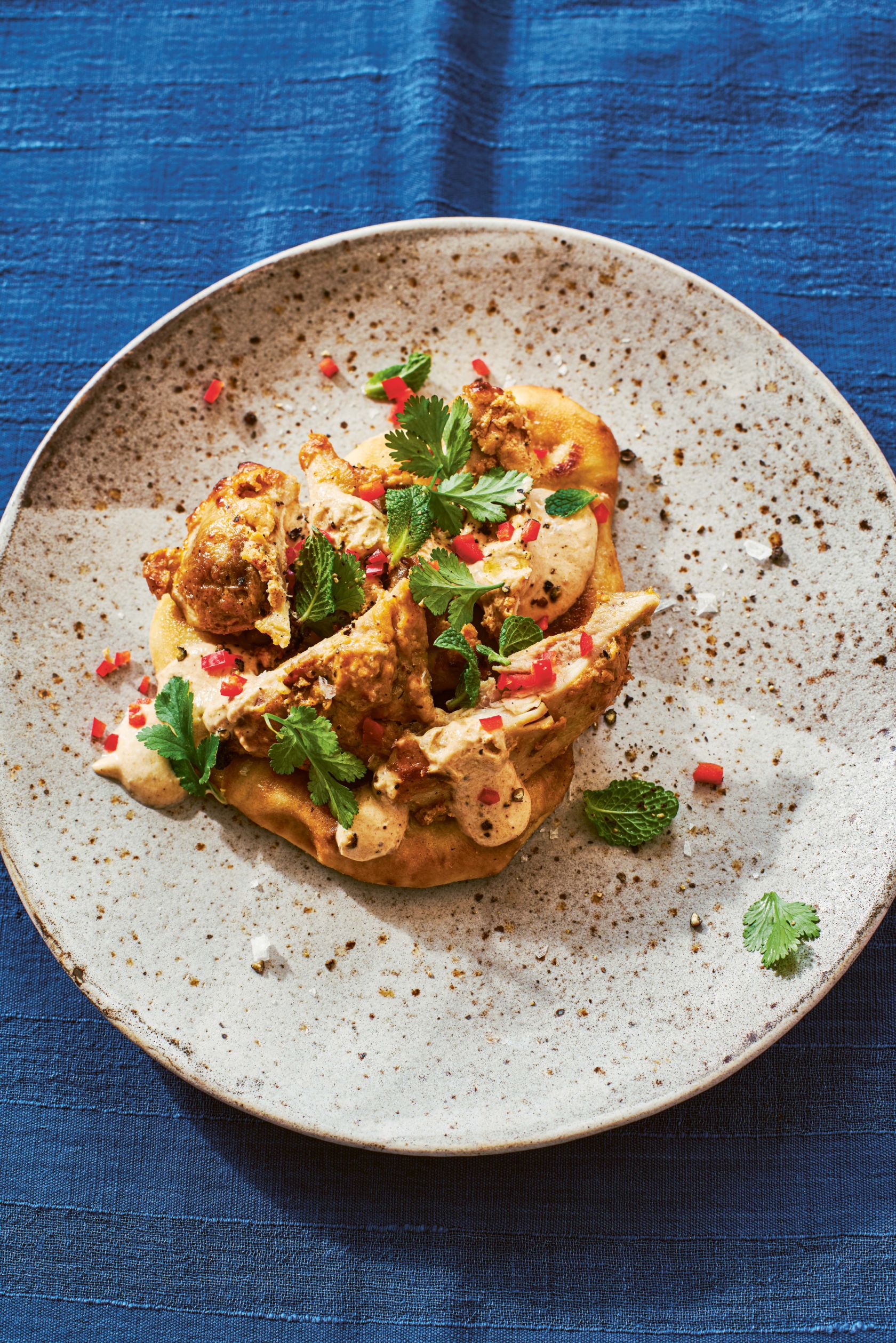 Oil for the tray

A few mint or coriander leaves (or both)

2. Mix the yogurt, lemon juice and tikka paste together and reserve half of it for later. Turn the chicken thighs in the rest and spread them out on an oiled baking tray. Roast for about 35 minutes until brown and cooked through (a skewer should glide through the flesh easily). Slice each thigh into three.

3. Warm the naans or chapatis briefly in the microwave or toaster and spread with butter.

4. Pile the chicken on to the breads, seasoning with a little salt and pepper. Top with a dollop of the reserved yogurt, the chilli and herbs. 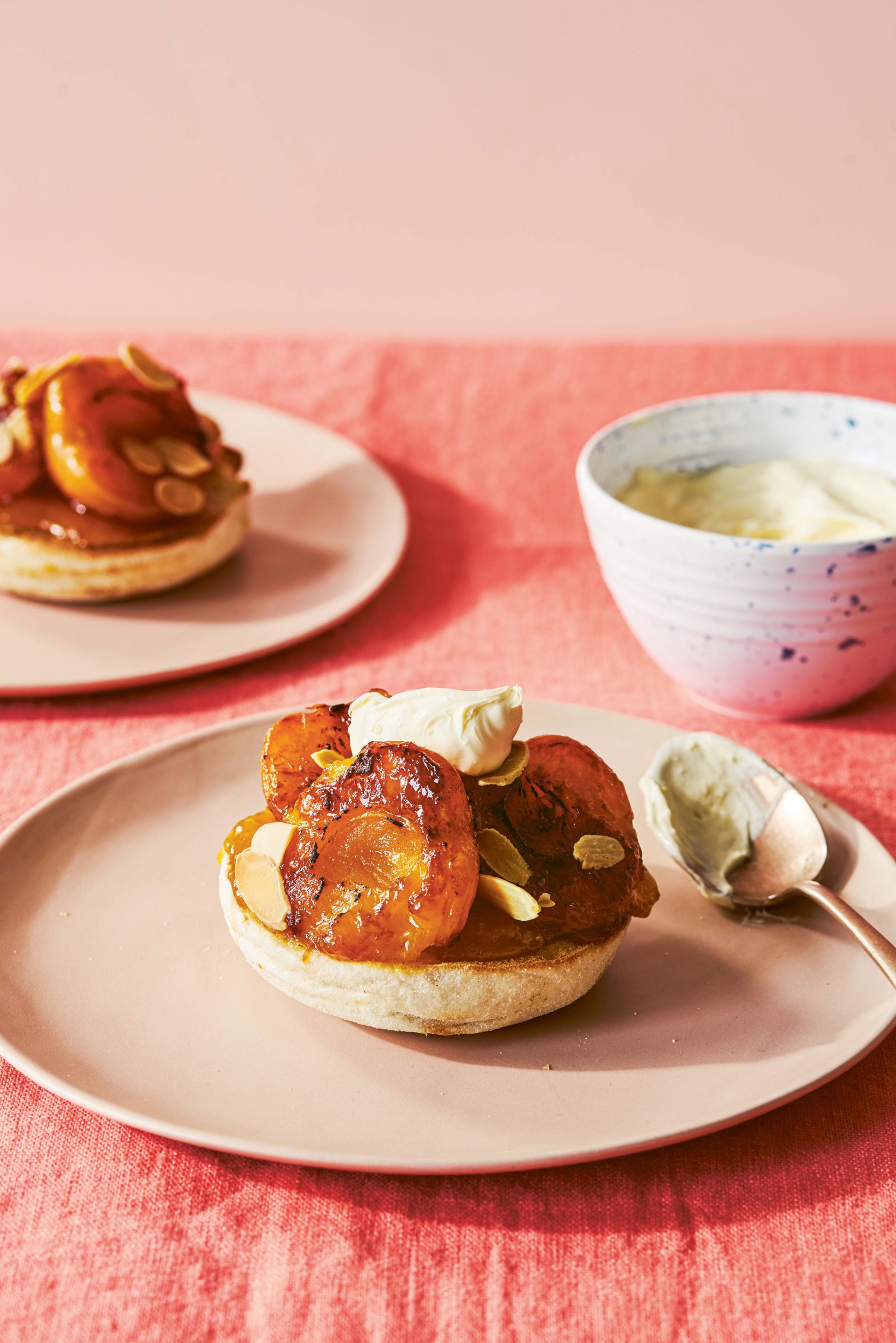 2 large apricots, or 3 small ones

40g butter, half of it melted

1. Get the grill as hot as possible.

2. Halve the apricots, remove the stones and put the halves, stoned side up, on a grill tray. Brush them with the melted butter and sprinkle with the sugar.

3. Grill the apricots, not too close to the elements or gas flame, for eight to 10 minutes until brown round the edges.

4. Meanwhile, butter the toasted muffin halves and put them on warm plates. Spread them with apricot jam and share the apricot halves between them.

5. Sprinkle with the almonds and serve with clotted cream.

Tip: You can toast the flaked almonds in the oven under the grill tray at the same time as roasting the apricots, but they burn in a flash, so be careful. Safer, probably, to stand over them while you gently turn them in a frying pan, or toast for three minutes in the microwave, giving them a stir halfway.

Bliss On Toast by Prue Leith is published by Bloomsbury