This is a place where Baroque architecture, art and culture intertwine with an abundance of outstanding natural beauty ranging from radiant blue seascapes, golden beaches to majestic mist-capped mountains rising up from rugged shorelines. 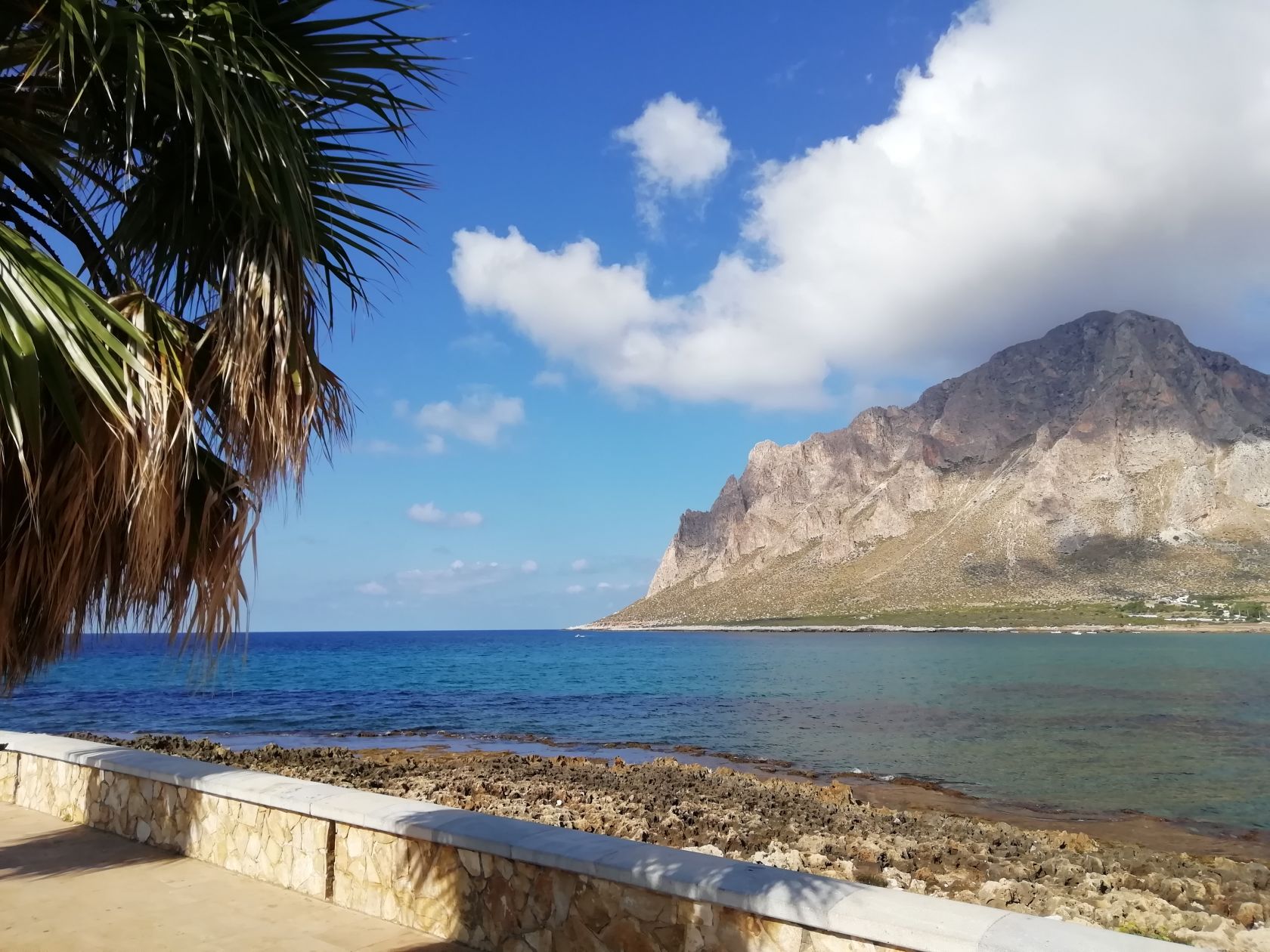 Then, there’s Mount Etna, the active 3,335-metre high volcanic leviathan that continues to pour out glowing rivers of molten lava. Etna regularly spews vast plumes of ash and steam from rumbling vents and fissures near the summit. Europe's most active volcano may not be for the faint-hearted but it does nevertheless provide a spectacular sight which draws in thousands of eager visitors each year.

Sicily also boasts plenty of serene, picture-postcard fishing villages as well as rustic mountain settlements which cling precariously onto cliffs and crags. These awe-inspiring locations make great reasons to visit this unique place. This is an island getaway that will undoubtedly leave you hankering for more. 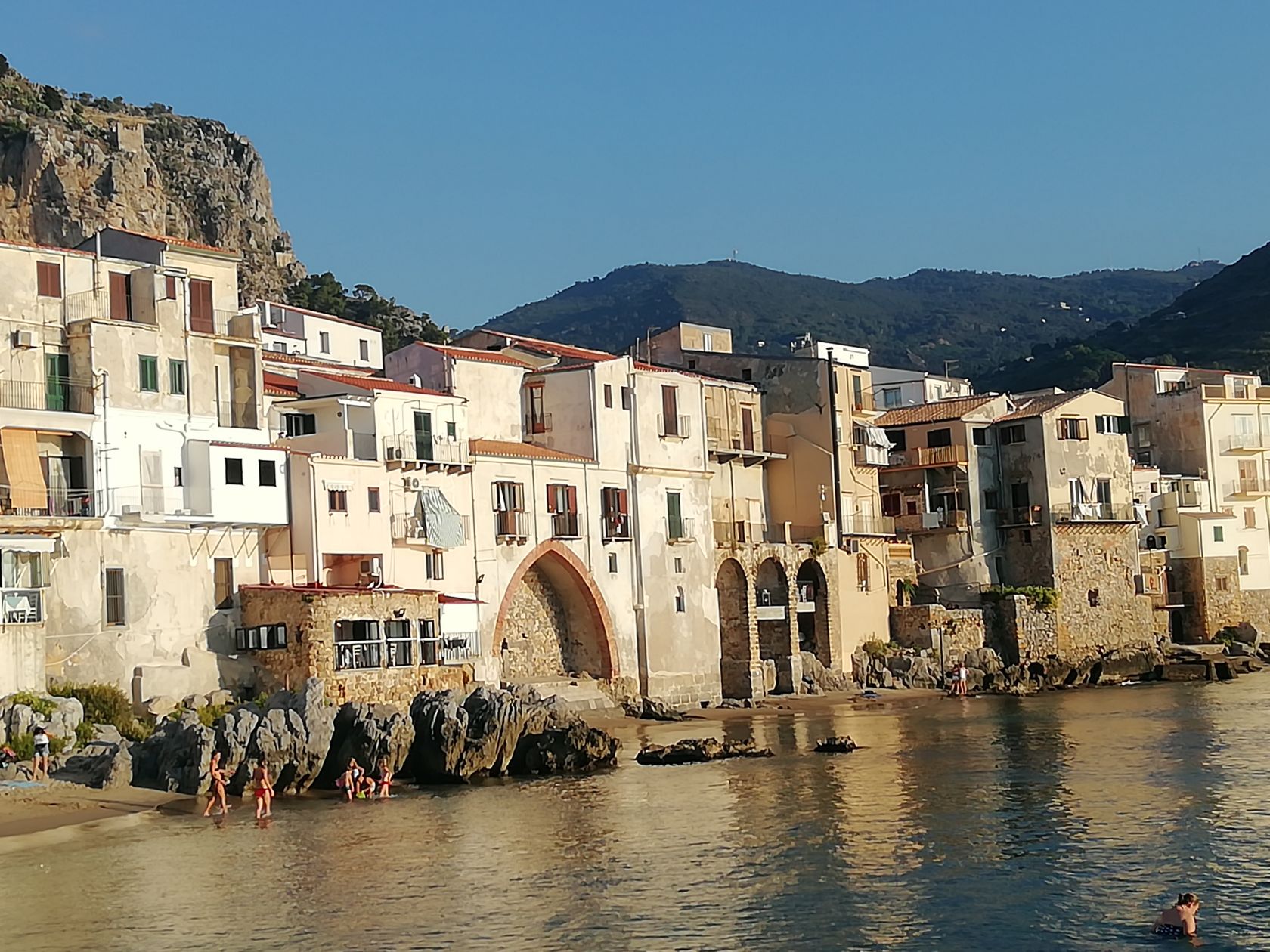 During my visit we stayed in Terrasini, a town in north-west Sicily. It's just 20 or so kilometers west of the capital, Palermo. Terrasini proved to be a relaxing base from which we could explore the island with easy access to the Autostrada. This meant that touring by car was made simple. We often timed outings so that we could return to our centrally located apartment in good time to ditch the car, freshen up and head out on foot to spend balmy evenings enjoying light meals and a few convivial drinks at Piazza Duomo. This is Terrasini’s busy central piazza which boasts an excellent choice of bars, restaurants, coffee shops and gelaterias. The Piazza Duomo is only a short distance from seafront amenities and the promenade. Perfect for peaceful late evening strolls.

Palermo is a must-see for Sicily’s many visitors and it proved to be a great spectacle in its own right. Like most capital cities, Palermo bears little resemblance to the rest of the island. It’s a vibrant, stand-alone, often chaotic metropolis that’s permanently buzzing on extra high octane. But its many qualities and charisma will never fail to impress. 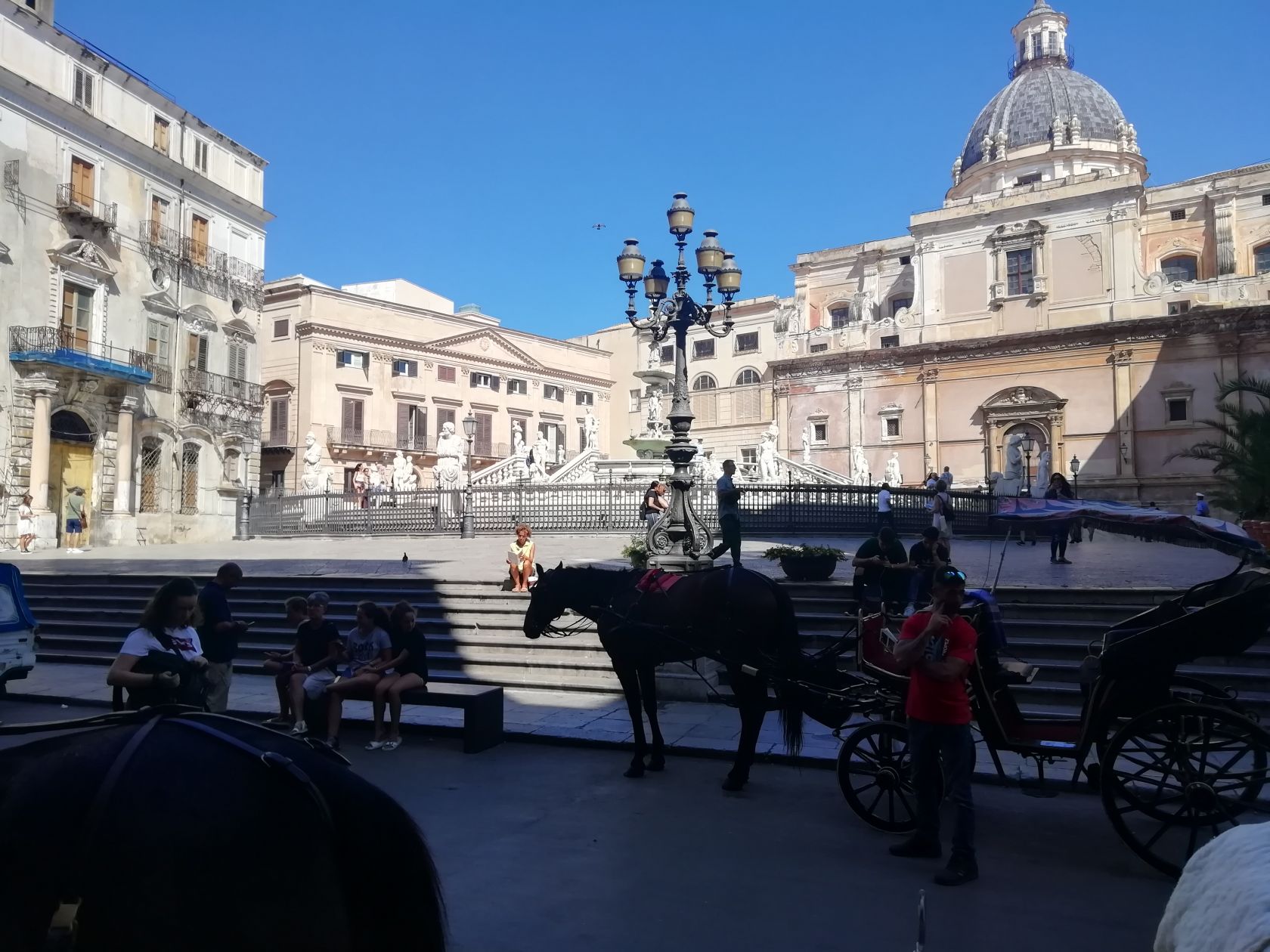 We chose not to drive into Palermo but decided to take the train instead. If you’re not accustomed to Sicilian driving, I strongly recommend you follow suit. Trains are regular, punctual and cheap – not to mention safe! Palermo Centrale Railway Station is an ideal starting point from which to explore the city on foot. Beware the rip-off tuk-tuk operatives! Always agree a price before availing their services.

The city of Palermo is famous for its street markets, such as the Ballaro Market. They're quite different from other European street markets because they've retained so much of their distinctly Arabic character. They definitely provide a bazaar-like ambience which isn't just reflected in the seemingly chaotic way they're set out but it’s also evident by the sheer abundance of exotic produce on offer. This includes spices, different types of nuts and pulses as well as a bewildering array of sun-dried fruits such as apricots, figs, dates and papaya. I don’t think I’ve ever seen so many fresh tomatoes in all my days and there’s such an incredible variety.

Motor scooters and pedestrians miraculously intermingle, seemingly without incident. This chaotic melee means that the street markets of Palermo really don’t feel remotely European. In fact Sicily is geographically further south than some of the North African coastline making for a quirky island that seems, in many ways, to have one foot firmly planted in North Africa where so much of its rich tapestry of history and culture hails from. 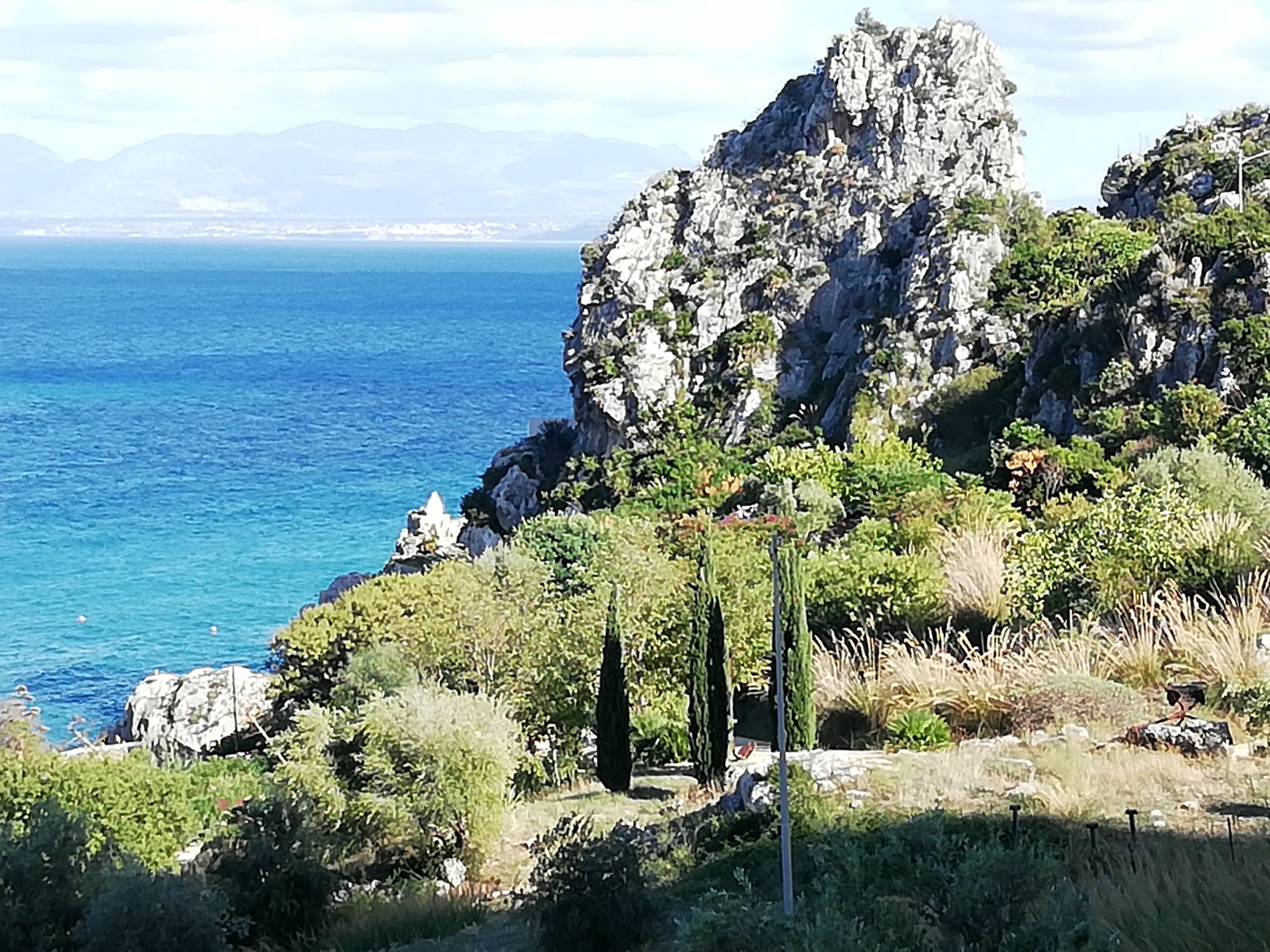 The street food at Palermo’s markets seems to be a bit of a must-have amidst many tourists but it’s often best not to ask what some of the delicacies actually are if (like me) you happen to be a tad reserved.

The fruit and vegetable stalls are an absolute blaze of colour, freshness and fragrance. We watched as fresh pomegranates, melons and oranges were juiced and poured on ice in order to create some deliciously refreshing drinks. This helped quench the thirsts of many of our fellow travelers as we sizzled in this bustling city. We found a nice open air café to sample some of these tasty juices. We took time to sit back, relax and simply take in all the charisma and theater which make the markets of Palermo such a magical experience. You can easily spend an hour or more just watching people going about their daily lives. There won't be any dull moments to taint your Sicilian adventure hereabouts.

During our drive out to visit Mount Etna, we stumbled across the annual pistachio festival in the town of Bronte. Here, the pistachio crop is called ‘the green gold of Sicily.’ It’s easy to see why because, in Bronte, pistachios are sold in all manner of guises. Pistachios are a key ingredient in centuries-old Sicilian culinary traditions. There are plenty of interesting recipes which include this tasty legacy from the ancient Arabic domination of Sicily. Not least of all the amazingly creamy and delicious pistachio ice cream.

Bronte is one of Sicily's ancient, rustic towns. It's situated on the beautifully picturesque slopes of Mount Etna and lies within the Etna Natural Park. Bronte is the world-famous ‘capital’ of pistachios. A place where friendly locals like to celebrate their “green gold” harvests. This celebration takes place at the beginning of October when the whole town bursts into life. There is a jovial, party-like atmosphere that runs late into the nights. It's a surreal experience. People simply go ‘nuts” for pistachios and it made for a very enjoyable part of our time in Sicily. I absolutely recommend some of the unique pistachio brittle. You really must stop to watch it being made with such dexterity and skill - not to mention a whole lot of pistachios! 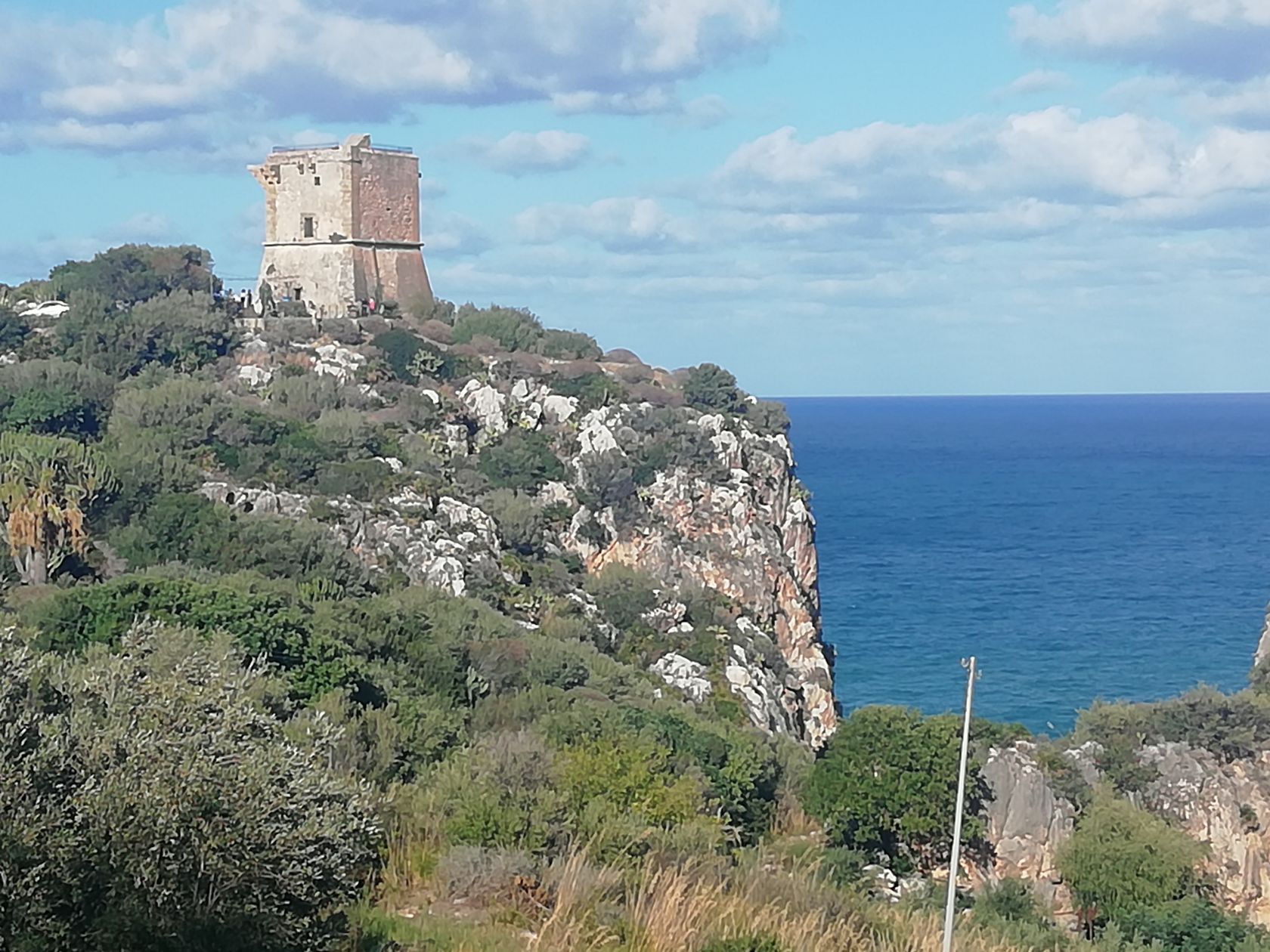 We spent our time exploring as much of the Island as we could possibly fit in. One of our visits took us to another unforgettable medieval hill town, Erice, which overlooks the port city of Trapani on the island's west coast.

Erice is surrounded by ancient defensive stone walls. It is crowned by a medieval castle which dominates the surrounding area from its lofty vantage point approximately 800-metres above sea level. The views alone are well worth seeing. No words can adequately describe those views. I was simply left speechless, consumed by the delights of life in Sicily.

I will therefore conclude with the words of Frederick II, once King of Sicily. He is said to have earnestly declared: “I don't envy God's paradise because I'm well satisfied to live in Sicily.” I can certainly appreciate those sentiments which is why I just can't wait to return.

Shannon Airport bounces back after Covid with passenger numbers tripling

An Update from embark2