This one-day event, which will be happening from 9.30am until midnight, will be focusing on three core topics: nature, mental health and arts.

The first edition of the Residents' Festival, hosted by Biovila, in Arrábida Natural Park, Setúbal, will take place on 25 June and will feature several talks, workshops, music, as well as activities for children.

They will be talking about agriculture, climate changes, mental health, medical herbs, and psychedelic substances. “People who are curious about these topics will have the chance to attend a quite intimate event and actually be able to take part of these activities and talk to this people”, said Elizabeth Muirhead, founder of Residents Festival.

Elizabeth is British, but is currently living in Setúbal, Portugal. Previously, in London she was working as a solicitor. Then, she moved to Barcelona, where she was also working in law. “They were both male lead organisation. At this point of my life I’ve realised the importance of women going out and leading their own projects. So the energy comes from that place”, she told The Portugal News.

In the world we are living in, people's mental health is actually very poor. Although it is an issue that people are more aware of, it is still one of the main problems in our societies. In which direction are we moving? How does this affect our mental health? Why is our mental health in such a bad state today? These are some of the questions that the speakers will address.

In this regard, many professionals such as psychologists, neuroscientists, psychiatrists and academics will bring a new topic that is growing all over the world, which is the discussion around psychedelics. In these lectures, there’s going to have space to listen to attendees’ voices. "This is not a monologue”, they highlight.

After decades of hearing how bad these substances are, I took the liberty of asking how these illegal substances can actually be good for us in any way. To which she responded by saying that: "I don't think everyone should be doing psychedelics I think we should be having a conversation with people about the changes that are happening in the world”, she said.

“Actually there’s a big movement in Portugal as well. What do psychedelics do to us, why are people enjoying them? Is everyone enjoying them? Who is not having a good time on them? I think there are both sides of it. I don’t believe at all that everyone should start using psychedelic substances or taking part on this kind of therapies because we are oalmost 8 billion human beings in the planet and everyone was going to have their own ways of taking care of their health, mentally, physically and there’s not a solution for everybody”, Elizabeth clarified.

In this sense, for those who want to know more about the subject, she suggests a documentary called "fantastic fungi". "It's not just about psychedelics, it's about fungi is general. A lot of what comes from that film is people having amazing experiences, but that doesn't mean that everyone will have amazing experiences," she pointed out.

This type of events is not usually very science-oriented. However, this one seems to be an exception considering the outstanding speakers with a scientific background, such as Pedro Texeira, Professor at the University of Lisbon, Rita Águila, Clinical Psychologist, Pedro Castro Rodrigues, Psychiatrist, and many others, who will take part in the Residents' Festival.

Also, the founder of the event, Elizabeth, has got a masters in regenerative agriculture herself. So when I asked how can we combine a spiritual belief with science, she said that: “It’s all about regenerating the planet, leaving the planet better than how you found it. Science is a man made industry, but human being has been growing food for thousands of years before science was even a thing”.

Also, “everyone on stage have a scientifically voice, but every single person on the stage is a human being as well”, she highlighted. 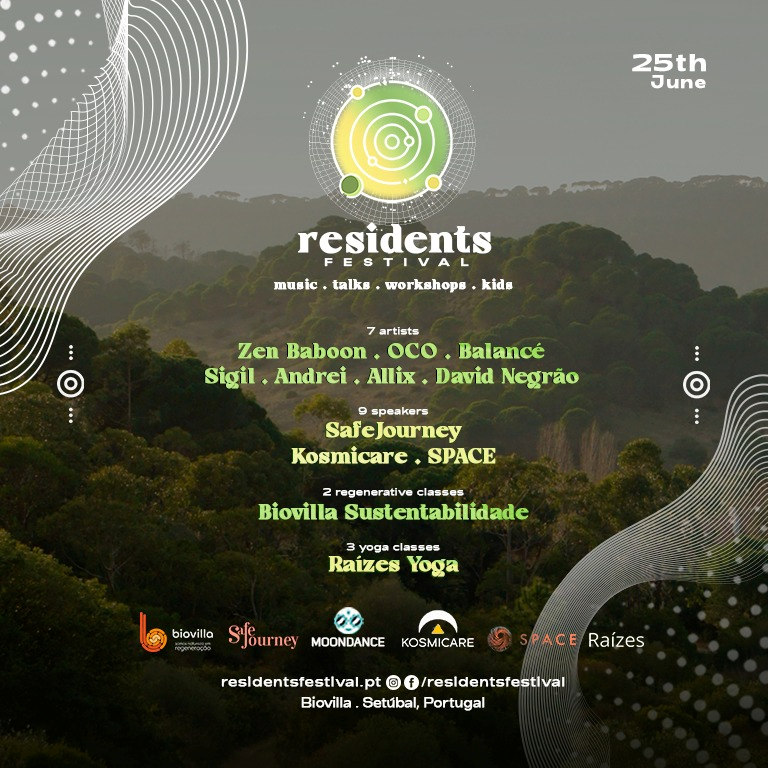 As for the music, the stage will be shared by “really good and local” artists that are well-known by the audience, such as the Zen Baboon, OCO, Balancé, Sigil, Andrei, Allix and David Negrão.

In addition, they will promote yoga sessions and workshops on medicinal herbs and activities for children where they can play together and have a lot of fun.

If you are interested in attending this event, please be aware that although the organisation is English, all talks will be held in Portuguese, as the speakers are Portuguese. For more details, please see https://residentsfestival.pt/

More in Other Events

In Other Events, Community

By Cristina da Costa Brookes, In Other Events

More in Other Events

In Other Events, Community

By Cristina da Costa Brookes, In Other Events

By Jake Cleaver, In Entertainment

European Cinema Week returns to Porto from 23 to 29 September

By TPN/Lusa, In Entertainment, News

Music and festival industry on the brink

Other Other Events Articles

By TPN/Lusa, In Other Events, Algarve

By TPN/Lusa, In Other Events, Portugal, Entertainment

By TPN, In Other Events

View all Other Events articles