The Berber & Q chef tells Prudence Wade about falling in love with vegetables – with some help from his old boss, Yotam Ottolenghi.

Like many people, the pandemic made chef Josh Katz want to go back to basics. He even relocated from London to Ibiza, saying he believed “the pandemic was telling us it wants us to live a more simple life”.

“I moved to the middle of nowhere and started growing my own vegetables – but I found out it’s really difficult,” Katz admits. “It’s actually not that easy to live self-sufficiently, it takes a lot of work and a lot of time” – particularly if you’ve got work and family responsibilities to take care of as well.

Katz soon found he was battling with the more challenging climatic conditions of the Balearic island. In the UK, he explains, “we get a lot more rain – and there you get great sunshine”, but the soil isn’t quite as rich.

He did try, though. “I had courgettes, I tried pumpkin, I had peppers, I had chillies, I had aubergines – I had a lot of things.

“You spend all this time growing it, and you get like three leeks at the end,” he adds with a laugh. “I’d really have to commit to that, and live that – do it over and over – because every season you learn a little bit more about that particular patch, and how things grow.”

It would’ve been helpful for Katz to immediately produce a bountiful crop, because he was writing his second cookbook out there – one that’s entirely dedicated to vegetables. Instead, he says: “You would spend a lot of time tending to your plants, and then you would end up with like four red peppers – barely enough to test a recipe.”

This hasn’t entirely put him off, though. Katz says he’ll “persevere” – but it’s not like he’s going to become completely self-sufficient any time soon. Luckily, his experiences haven’t put a dampener on his love for vegetables, either.

“I’m not vegetarian, but I’ve been cutting down on meat over the last few years. For my own health reasons, I want to eat less, and also environmental,” he says.

Katz is responsible for London restaurants including the grill house Berber & Q and Shawarma Bar – and while they might sound meat-heavy, he says: “I think a lot of people expected we would just be a typical male, BBQ ‘dude food’ kind of place, and I was very conscious from the early days to make sure vegetables had a prominent place on the menu and weren’t just a side dish.

“In fact, one of our signature dishes from the first restaurant we opened was our cauliflower dish [Berber & Q’s cauliflower shawarma].”

Katz admits he “couldn’t go vegan – I just wouldn’t be able to”. Instead, he says: “Eating more vegetables and reducing our meat intake is achievable and manageable, and will have a positive impact.”

Not that Katz has always been into veg – he admits it’s been a “journey of discovery, and I’m still on it. Certainly as a teenager, vegetables didn’t play a significant part of my diet, and in my 20s vegetables were never an exciting thing for me.”

The real turning point was when Katz started working for Yotam Ottolenghi in his late-20s. “He’s always been a big advocate for cooking vegetables, and that was probably the starting point for me – cooking in Notting Hill, doing salads every day. I loved my time there. I had been working at a French restaurant before… classic bistro cooking, much richer and heartier French cooking. 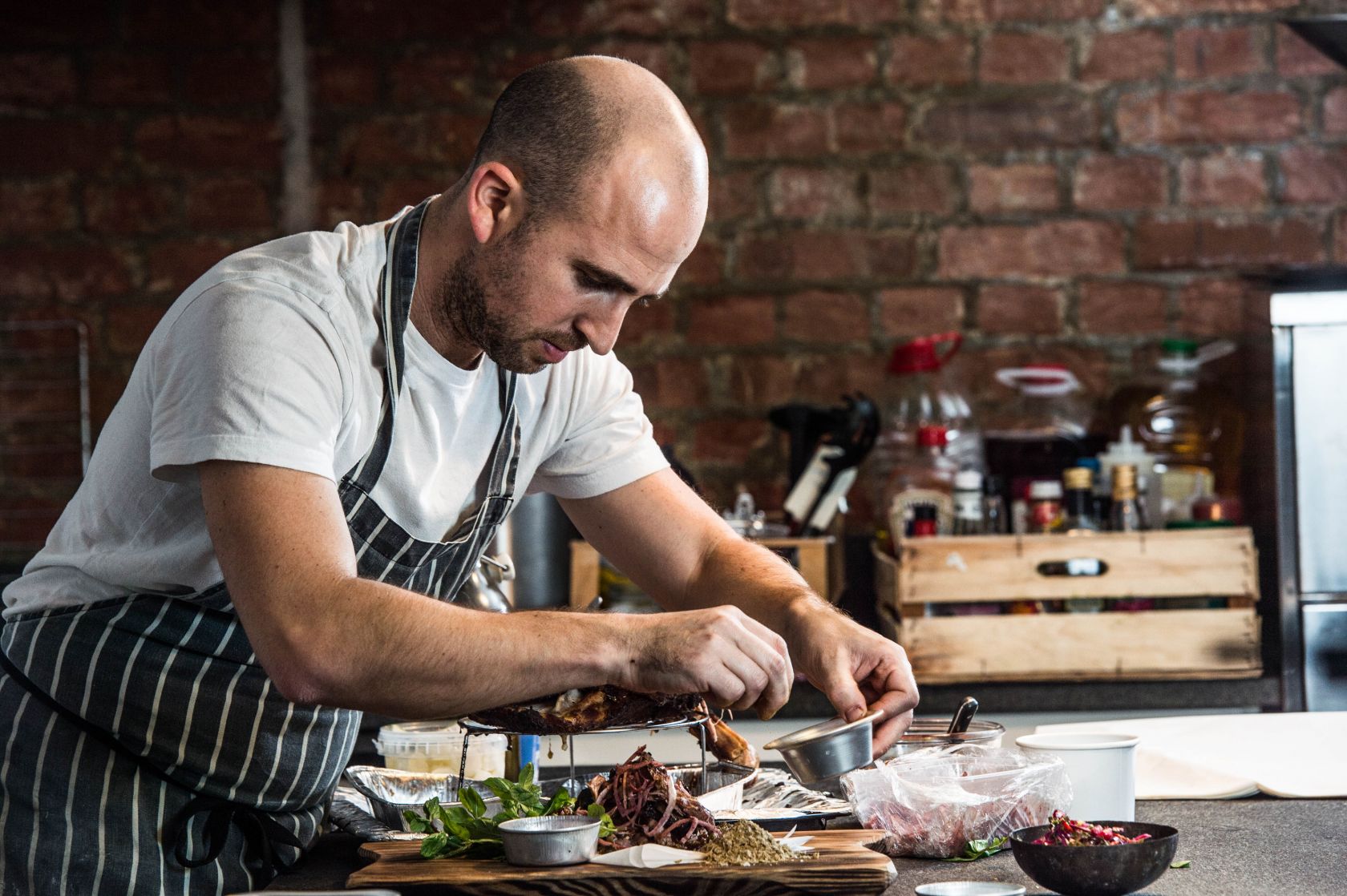 “Then I went to Ottolenghi, where it was all about light and bright colours and vegetables. I think that was probably when I started to embrace vegetables. And 12 years later, I’ve written a book on it.”

There’s a mix of cuisines in the book, from the Middle East to North Africa. Mediterranean dishes also feature heavily – perhaps unsurprisingly, as Katz was writing in Ibiza – and there’s a reason he eats a lot of Mediterranean-style dishes.

“It feels like a healthy diet, I always feel a lot lighter for it,” he explains. “Subsequently, I feel healthier and mentally more charged by it. Conversely, when I’m eating lots of rich, heavy foods, I feel a lot more sluggish, a lot more tired.

“I’m getting to the stage in my life – I’m 41 – where my body starts to communicate with me. In my 20s, I could put anything into it, eat whatever and it didn’t really make a difference. But now it tells me what it likes, and what it doesn’t want – and it changes as you get older,” he adds.

“So the Mediterranean diet just feels a slightly cleaner and lighter approach to cooking for me.”

For the pumpkin purée:

For the lemon dressing:

For the chilli-roasted pumpkin bulgar:

1. For the pumpkin purée: set the pumpkin in a steamer over boiling water and steam for 12–15 minutes, until completely tender. Transfer to a food processor, add the sugar and lemon juice and blend until smooth.

2. Transfer the purée to a saucepan and cook over low heat for 10–15 minutes, until thickened and concentrated in flavour. Remove from the heat and set aside to cool until needed.

3. For the lemon dressing: Combine the garlic, lemon juice, vinegar and oils in a small bowl, season generously with salt and black pepper and whisk to combine.

5. Roll the pumpkin in the olive oil, sprinkle with the sugar and chilli flakes and season generously with salt and black pepper. Transfer the pumpkin to a parchment-lined baking tray, scatter the lemon thyme over the top, and roast for 20-25 minutes until tender and slightly charred.

6. In the meantime, prepare the bulgur by covering it with boiling water in a small bowl and allowing it to soak for roughly five minutes. Drain, lightly run a fork through the grain to fluff it, so that it doesn’t become clumpy, and set to one side to cool.

7. Combine the bulgur with the chopped herbs, hazelnuts and capers and stir through 60ml of the lemon dressing. The tabbouleh should be light and sharp, not drenched and heavy. Check for seasoning and adjust accordingly.

8. Place the pumpkin purée on the bottom of a plate, layer the pumpkin and bulgur mixture on top, scatter the cheese over and serve. 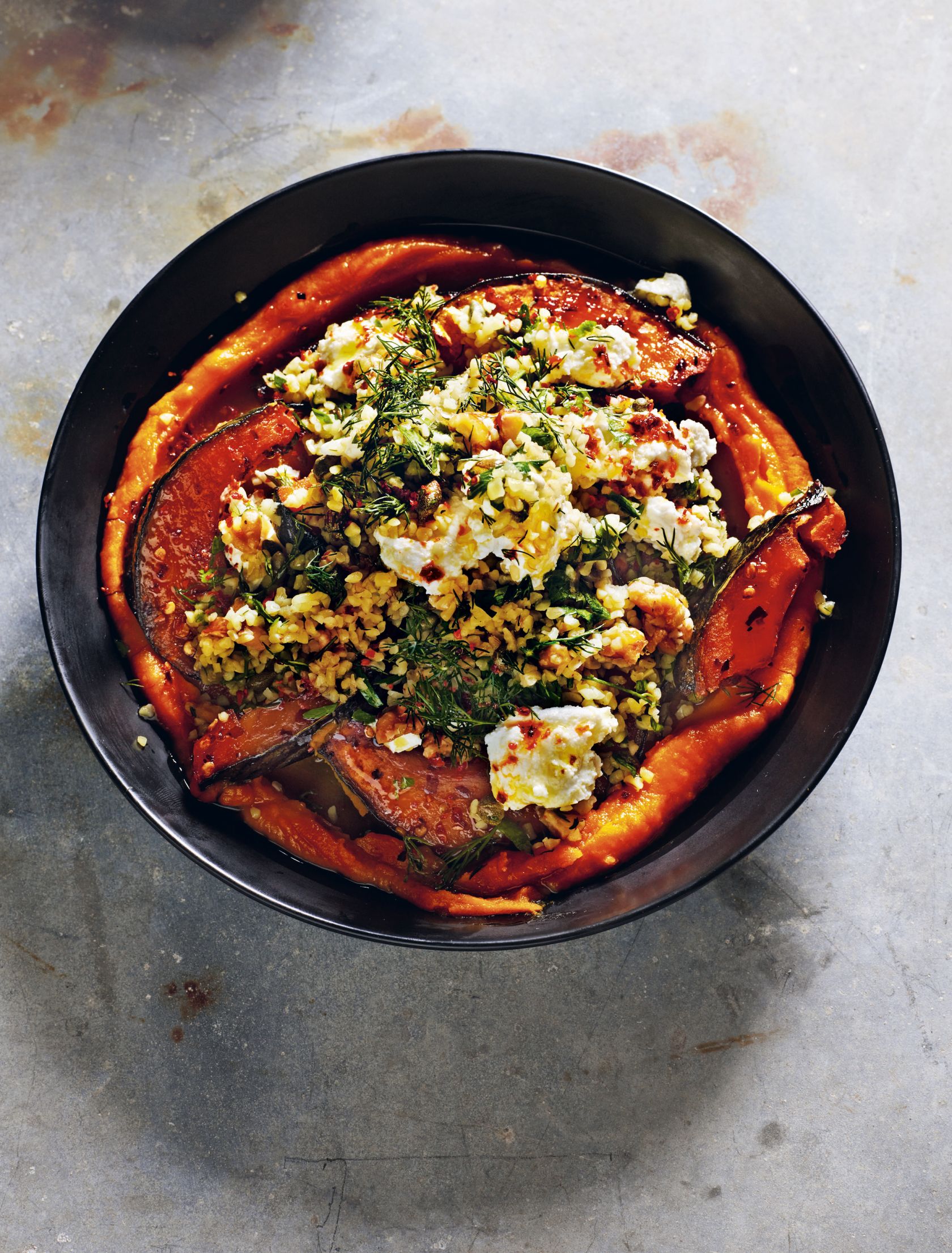 1. For the chilli-honey dressing: Put the honey, lemon juice and chilli in a small bowl and slowly whisk in the olive oil. Season with salt and black pepper to taste.

3. Combine the mascarpone, crème fraîche, lemon zest and garlic in a bowl, and whisk until smooth. Season with salt and black pepper to taste.

4. Place the pastry rectangles on the lined baking sheet and brush the egg yolk around the border of the pastry, roughly two centimetres in from the edge. Prick the centre gently with a fork, five or six times for each square.

4. Smear the mascarpone mix in the centre of each, crumble the manouri cheese over it, and arrange the courgette slices on top, overlapping them slightly. Sprinkle over a little thyme, salt and pepper, and a drizzle of olive oil. Transfer to the oven and bake for 20–25 minutes until the pastry is golden brown, puffed at the edges and the base is crisp.

5. Slide the galettes onto serving plates and drizzle liberally with the chilli-honey dressing. Serve immediately while still warm. 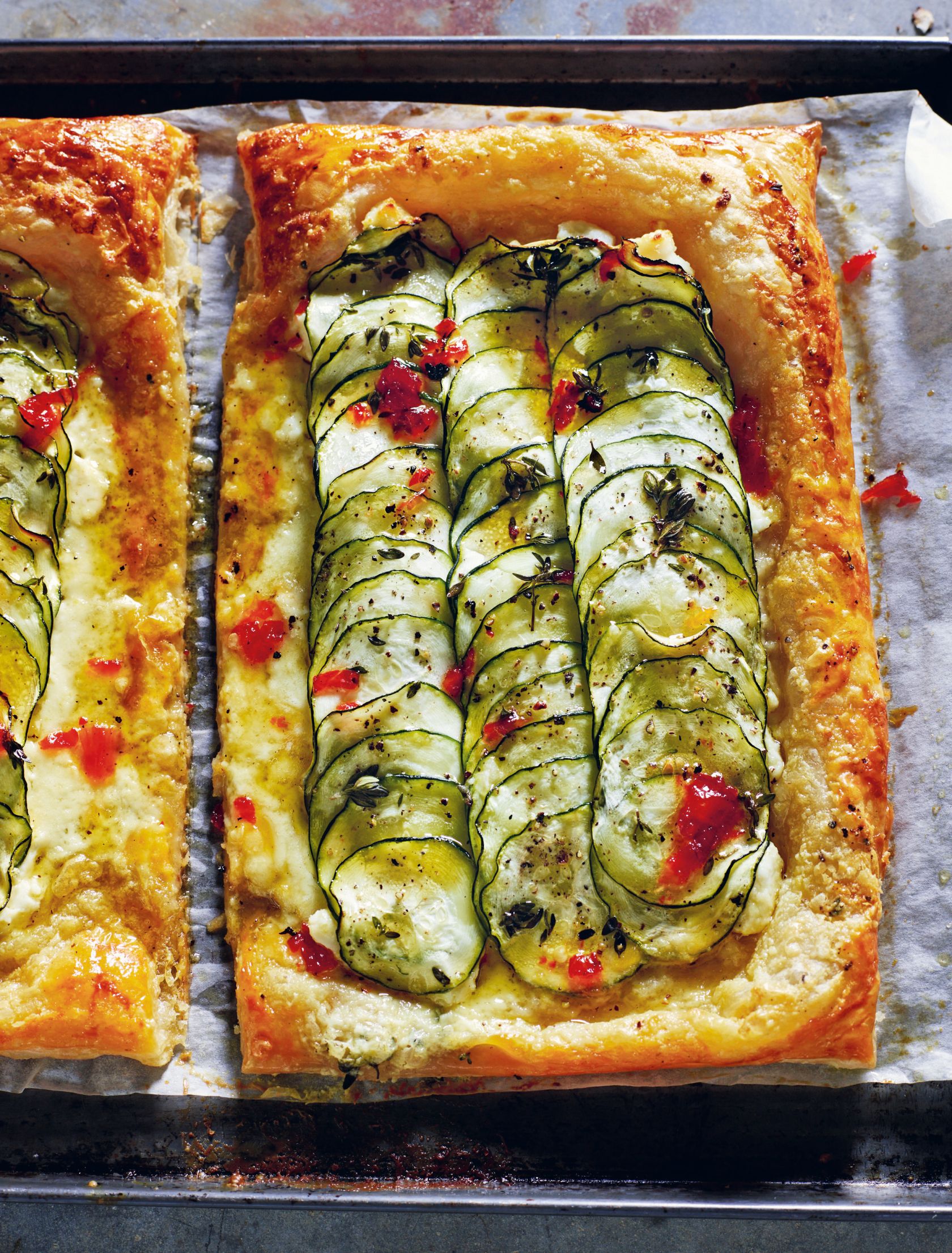 1. Bring the verjuice and sugar to the boil in a medium-sized saucepan over medium-high heat. Add the currants and barberries. Take off the heat and set aside, allowing the fruit to soak in the juices for 30 minutes – they will soften and plump up. Drain and set aside until required.

2. Preheat the oven to 160°C/140°C Fan/Gas Mark 3. Roll the pumpkin seeds and pistachios in the olive oil and season with the salt. Transfer to a parchment-lined baking sheet and toast in the oven for 25–30 minutes until golden and crunchy. Set aside to cool.

3. Rinse the rice in a bowl filled with cold water and swirl several times with your fingers to release the starch. Repeat the process two or three times until the water runs clear. Drain and set aside. Put the bay leaf and fennel seeds on a muslin and tie a knot, making a bouquet garni. Half fill a 20cm saucepan with water, add the bouquet garni, and bring to the boil over high heat. Add the rice, stir several times, bring back to the boil and cook over medium-high heat for five minutes until the rice is slightly softened but still firm. Drain the rice and run under cold water briefly to cool to stop it from cooking any further, then leave to stand in the colander for a few minutes. Transfer to a baking tray, spread out to a thin layer and set aside until completely cooled.

4. Butter a non-stick frying pan. Take one-third of the par-cooked rice and place in a large bowl with the yoghurt, a third of the melted butter and the rice flour slurry. Stir to combine. Spread this rice evenly in a thin layer onto the bottom of the prepared frying pan. This will form the tahdig. Layer the remaining par-cooked rice on top intermittently with three-quarters of the currants, barberries, pumpkin seeds and pistachios (saving the rest for the garnish), working your way up in layers to make a mound shape. Do not pack the rice down. It should be layered lightly to leave space for the rice to expand. Wrap the lid of the pan tightly with a clean tea towel and place on top so that it fits snugly. Place the pan over medium-low heat and cook for 12–15 minutes. Towards the end of cooking, drizzle the rest of the butter around the edges.

5. Just before serving, dig up a small well in the top of the rice and gently add the egg yolks. Cover the yolks with the rice and, using a plate where the lid once was, invert the rice carefully on to a plate. Serve immediately with the rest of the pumpkin seeds, pistachios, raisins and barberries scattered over the top. 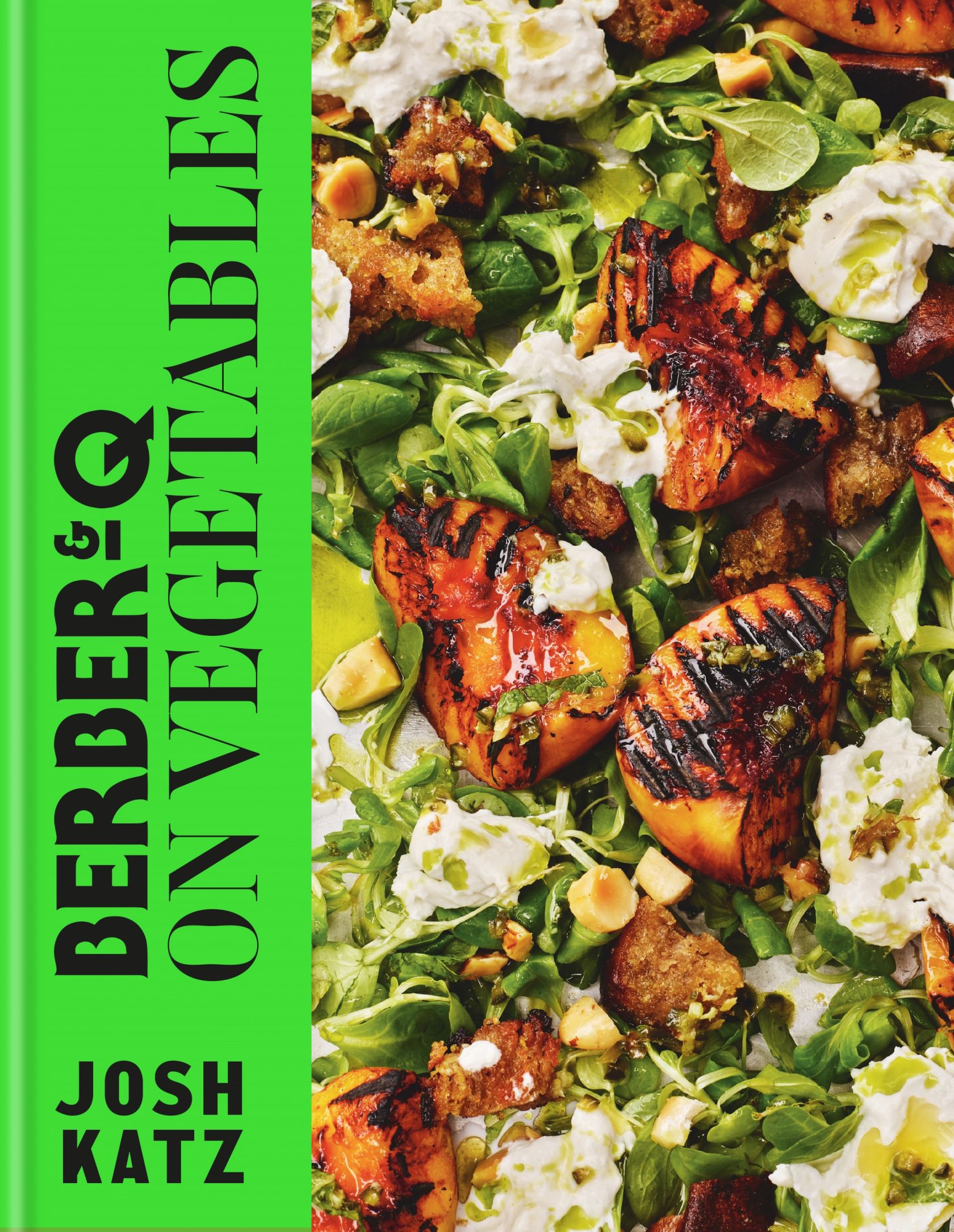 Kudos for this Chef. Watching the stubbornness in “MasterChef” programmes´ judges (usually at least 2/3 are Chefs) one gets really frustrated about the insistence (bordering on fascism; there have been contestants trying to promote hearty/flavoursome vegetables´ dishes, but judges have their bad habits imposed on contestants as rule) on animal protein featuring savoury dishes. It´s a culture pb in the Culinary Scene. There are ppl in this world who need to do physically exerting work everyday-bricklayers/construction workers/farmers/etc- and I don´t think it is fair to ask these ppl to eat less meat. But everyone else, however? No excuse to eat such a big proportion of animal protein every meal. I´m not a vegetarian, I´m omnivorous; but I do eat far more vegetables than meat.

From art school to world-famous baker

Mexican food without the meat

Portuguese waste a million tonnes of food a year

A new exhibition at the Edu Hub Lisbon

Cordas Festival at Museu do Vinho do Pico

Rotary pilgrims on the brink