An island filled with unique experiences to discover.

The Madeira archipelago is one of the Portuguese Autonomous Regions. In 2020, it had more than 250,000 inhabitants, making it the sixth most populous region in the country. It comprises 54 parishes, spread over 11 municipalities, the capital being Funchal.

Known for its New Year's shows, or even for being the birthplace of stars like Cristiano Ronaldo, the island of Madeira was discovered in 1419, during the Discoveries period by Tristão Vaz Teixeira, Bartolomeu Perestrelo and João Gonçalves Zarco. The island was nicknamed Madeira (wood), precisely because of the abundance of material throughout its territory.

Currently, the island is one of the most popular tourist attractions in Portugal. According to data from the Regional Directorate of Statistics of Madeira, until June 2022, more than 948,000 overnight stays were registered in tourist accommodation in the Autonomous Region, of which more than 137,000 correspond to foreign tourists.

The climate in Madeira is usually constant, always maintaining mild temperatures, between 22 and 15 degrees Celsius. There are microclimates throughout the island and it is called by some the “Island of the Four Seasons”, precisely because during the day you can feel everything that, on the mainland, we only feel at certain times of the year.

Madeira ended up growing due to tourism, with its festivities, recognised around the world, such as New Year's celebrations, or even Carnival parades. The region can attract anyone for its events, but above all for its culture and its natural wealth.

Poncha is the traditional alcoholic drink of the archipelago of Madeira. Little is known about its origin, but it is known that during the 19th century the drink was widely consumed by Madeiran families, from all social classes. Some studies suggest that the Poncha resulted from a way of preserving the lemon during the Discoveries, to be consumed and avoid scurvy, due to lack of vitamin C. Thus, the lemon would be preserved in aguardente and cane sugar from Madeira. What is certain is that today Poncha is still based on these three ingredients.

Later the drink was consumed by fishermen, to warm the body before heading to the sea, nowadays the drink may not warm fishermen, but it will certainly help to cure colds and sore throats.

Currently, there are several flavours of Poncha, namely tropical fruits and other citrus varieties, to please all tastes and provide the best experience possible. 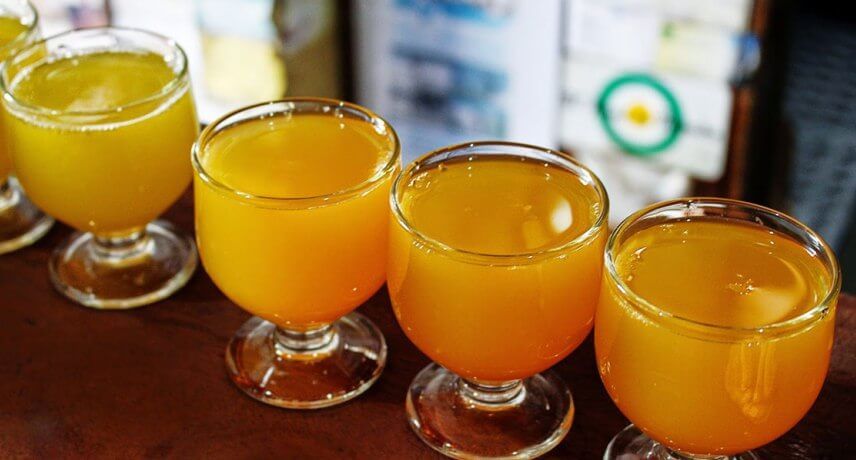 Inaugurated on the 25 of November 1940, the Mercado dos Lavradores, located in the centre of Funchal, undoubtedly deserves a visit. In addition to the usual hustle and bustle of any market, the atmosphere is certainly the best part of the visit.

Filled with tropical fruits, coming precisely from the island of Madeira, the market will always be full of colour. In certain stalls, vendors invite those who pass by to taste some of the fruits, from the most diverse species of passion fruit to the famous Madeira banana. The strategy never fails, not least because the explosion of flavours, of fruits that are only found in the region, will certainly make everyone want to take home a little bit of the island that has already taken over their heart. 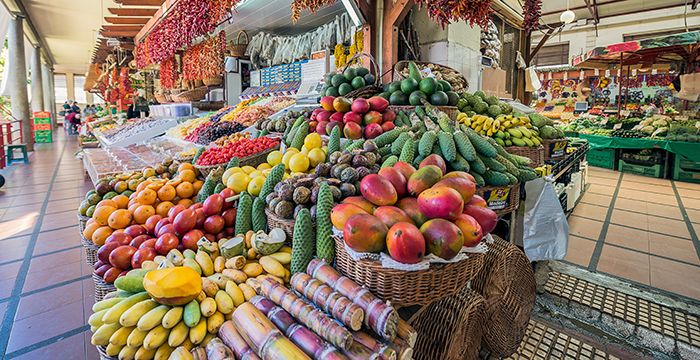 A dose of adrenaline is something lots of people are looking for, so Madeira allows visitors to take a trip on the Carros de Cesto do Monte. The Carros de Cesto appeared in the 19th century to transport people from Monte to Funchal more quickly. As time went by, it didn't take long for the means of transport to become one of the most sought-after tourist attractions in Madeira. 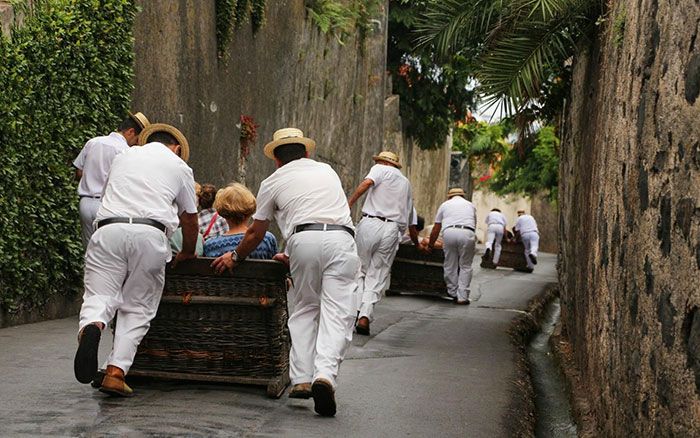 The carts do not have wheels and to slide better they are greased with tallow and driven by Carreiros do Monte. These men are all identified by a number, which dictates the driving order of the cars. If the last trip of the day is made by the number 43, the next day is the 44 who starts the trip. The teaching of the driving of the basket cars is transmitted from Carreiro to Carreiro. When a Carreiro do Monte wants to retire, he has the job of teaching a younger one how to drive the baskets, to later assign him his number.

Depending on the weather conditions, cars can reach between 15 and 38 kilometres per hour, while driving down the most picturesque streets in the region.

These houses are one of the best-known images of Madeira, visible on several magnets and postcards.

The triangular houses refer to the time of the Discoveries. Made in thatch and wood, for economic reasons, but also to help drain rainwater and balance the temperature inside the house.

The dwellings contained only an attic, to store agricultural products and a floor with the residential area, with a kitchen and bedroom. Today they are no longer habitable, but they can be visited, in an experience in which reconstructions of the interior can be seen of the houses, to understand what life was like at the time of their construction.

The island of Madeira is certainly a place to be visited by all who are interested in nature and want to spend a period of rest in a place like no other.

It’s never too late to find love in Ireland

A walk on the wild side in Madeira

What foreigner property buyers looking for?

“Everyone is talking about Portugal”

60 accidents registered last week on the roads of Madeira

Sea Land Islands - Productions of excellence between Sardinia and the Azores