There are three types of honeysuckle – vines, shrubs and a bush variety. Bloom times vary depending on the variety but can be anywhere from March through to September or as late as October, and they have an intense and sweet fragrance that attracts pollinators. The one I want to touch on today is the climber, Japanese Honeysuckle (Lonicera japonica).

Though perceptible at any time of the day, the fragrance of honeysuckle is most potent at twilight, and its aroma can permeate the air with a heady fragrance. In its native home of Japan and Korea, honeysuckle is indeed pollinated by night-flying hawk moths. Interestingly, our own native moths here in Portugal are also pollinators of this highly successful species.

It will grow well in full sun to part shade, and a shadier location helps keep its growth under control.

This is an adaptable plant that does well in average soil that drains well, and dryer soils are another element to limit the rampant growth of the vine variety, which is an excellent solution for growing up fences, walls or as a groundcover.

The climber twines thickly around any vertical structure like a trellis, even the base of trees, and bears fragrant buttery coloured flowers, dipped in pink. The vines gradually fade to yellow, and it is not uncommon to see white, pink, and yellow colours all at the same time. The flowers often produce blackberries that are mildly poisonous to humans.

It’s an aggressive vine which develops into a smothering mass of belowground runners, and above ground intertwined stems that cover extensive areas of the ground or climb up trees for many metres. It interferes with forestry operations and orchards and smothers native vegetation, preventing natural successional processes by killing or weakening young trees and preventing seedling regeneration. The fleshy fruit are spread by birds and animals, and runners go for long distances underground. It cannot be controlled simply by hand, but herbicides are moderately effective.

It has a long history of being used in China and Japan as an alternative medicine – with the flower, seed, and leaves being used for medicine for anything from rheumatoid arthritis to the common cold. People use honeysuckle for indigestion, bacterial or viral infections, memory, diabetes, and many other conditions, but there is no good scientific evidence to support these uses. Ancient records refer to children sucking the tasty nectar out of its flowers, where their medicinal properties are concentrated. Honeysuckle is sometimes applied to the skin for inflammation and itching, and to kill germs - but as always, consult your doctor first! 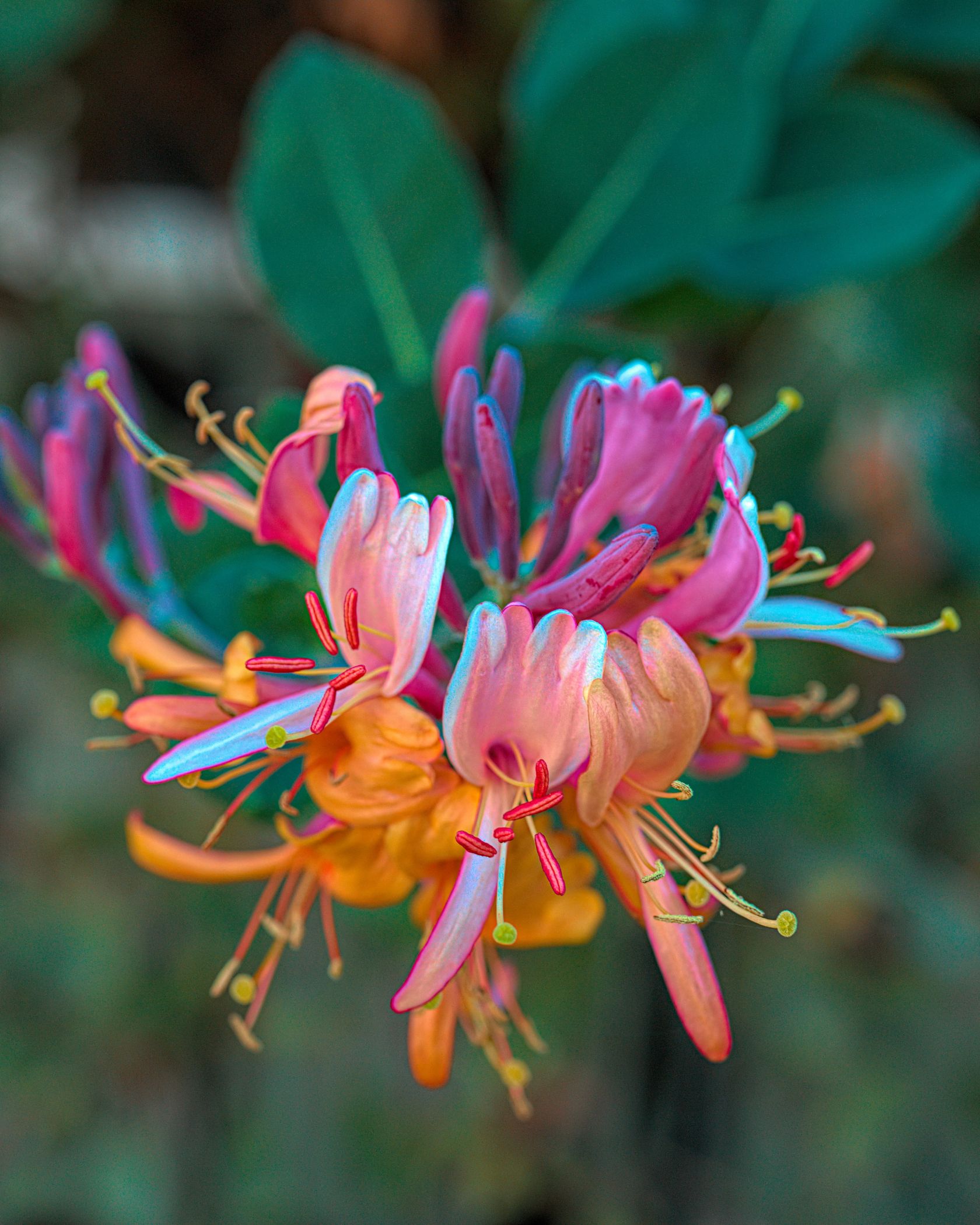 There are three native species in Portugal - first, the Common honeysuckle (Lonicera periclymenum), with creamy coloured, trumpet-like flowers that turn yellow-orange, often with a red or pink flush, with clusters of red berries which ripen in the autumn.

Next is Etruscan honeysuckle (Lonicera etrusca) known for its distinctly shaped yellowish to pink flowers. Its prolific blooms attract pollinators, plus its thick and vigorous growth make it a popular garden plant.

Native to Europe and Minorca is the Mediterranean honeysuckle (Lonicera implexa), with flowers that vary from pink before opening, to yellow-white. They are commonly found in Central and Southern regions, the Azores and in a smaller region in the Northeast of Trás-os-Montes, close to the Douro River.

You might enjoy its fragrance, but don’t kid yourself about this exotic vine, some would call it a vigorous grower, others would call it invasive. It is an aggressive coloniser that shades out native plants and harms natural communities. It will threaten to out-compete and displace native species, and will readily climb and shade out other plants, as well as sprawl along the ground. It can become so heavy it will topple its host plant.

But the scent is unmistakable - thick and intense, but at the same time, it's fruity and warm with hints of honey and ripe citrus. Almost good enough to eat!

To Nuke or Not to Nuke

To Nuke or Not to Nuke

What’s happened to my lawn?

Furniture placement – does it matter?

Spiders in the garden?

What’s wrong with having weeds?

How to fill an empty space!

How to calm your pet whilst travelling

What are moths for, exactly?