Who was the first to ‘clean up’?

The old method for cleaning a rug was to hang it up and beat the bejesus out of it with a carpet beater. Carpet sweepers, pushed along by manual means to clean up debris were next. The technology to make an electric cleaner took a little longer to come about, and in 1901, Englishman Hubert Cecil Booth patented the vacuum in the UK – or an early version of it.

His machine, the ‘Puffing Billy’, had a 5 hp piston pump driven by a petrol/gasoline engine or electric motor. It was a huge beast pulled by a horse from place to place and was rolled out for those that could afford it, as a visit wasn’t cheap—the cost equaled the annual wages of a 'tweeny', a junior domestic maid.

Locals outside were encouraged to marvel at the amount of dirt collected through a special glass chamber on the side of the machine—a cunning marketing strategy. After a round of court cases, brought about because of the disruption the machine caused on the streets (including frightening horses) and from a series of disgruntled inventors, Booth finally convinced the courts that his machine was the only vacuum cleaner at the time that actually worked.

When a customer’s home or business needed cleaning, a Puffing Billy was parked outside and a team of workers lugged hoses in through the doors and windows, and although this had obvious commercial applications, it probably didn’t make the life of the average householder any simpler.

Booth was an engineer and had set off on a mission to produce a machine that would suck, not blow. Apparently, after some alleged near-fatal tests—in which he nearly choked after putting a handkerchief 'filter' over his mouth and sucking up dust from the arm of a chair— he formed the British Vacuum Cleaner Company and launched his new device.

Such was his success that he was called upon to perform a number of unusual jobs–like cleaning the girders of Crystal Palace, which were suffering from accumulated dust, where 15 of his machines were used to remove literally tons of dust from the building.

But earlier in 1899, across’ the pond’, an American named John S. Thurman patented the first (and only) ‘pneumatic carpet-renovator’. Although he’s sometimes credited with the invention of the vacuum, his machine really did the opposite - it dislodged dust from carpets by blasting them with jets of compressed air, with the dust being blown into a receptacle rather than being sucked in. 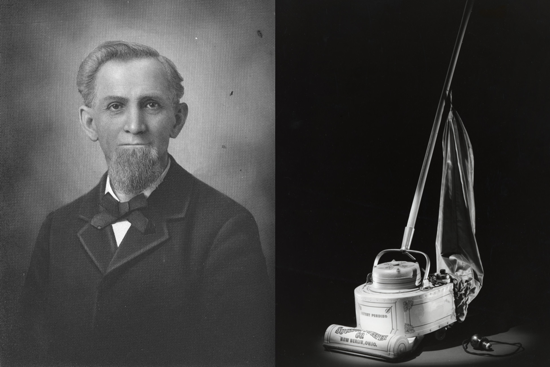 The one who succeeded had a personal stake in the vacuum - James Murray Spangler, another American - who worked as a department store caretaker and invented things on the side. He had asthma, not good for his job of cleaning a dusty department store, and it is said that he made his own vacuum cleaner from a tin soap box, a sateen pillowcase as a dust collector, and a broom handle. Inside the box, he had an electric motor from a sewing machine which powered a fan and a rotating brush. The crudely-made machine collected dirt and blew it into the pillowcase, and he called it ‘the suction sweeper’.

His cousin Susan Hoover (yes, that Hoover) also thought it was a good idea and told her husband, industrialist William Hoover, who bought into the idea in 1908, and the rest is history. His invention proved to be arguably the first truly practicable domestic vacuum cleaner.

More recently James Dyson invented the first bagless vacuum cleaner, after finding his vacuum’s bag was failing because of clogged dust. He took the machine apart, and after five years of trial and error, he invented the world’s first bagless vacuum cleaner in 1983. The model was first sold in Japan and, with the money he earned from sales, he launched his own company, Dyson Ltd., in the UK in 1991. Now a household name, Dyson has since expanded its product line to include fans, heaters, air purifiers, hair dryers, and hand dryers.

So, will all today’s smart appliances and gadgets finally give us that long-promised future of R & R? Only time will tell!

The greatest difference in results between using a broom and a vacuum cleaner is the broom stirs more dust than vacuum during cleaning. VC is my friend-the bag fills well, so there´s lots to clean regularly- even though the people representing it locally are not (NILFISK). How can anyone make maintenance of the apparatus-which can last my whole life w/out ruining because it has maintenance implied- if the people supposed to do that locally swindle costumers? It defeats the whole purpose of the brand- to not have to change VC during your whole life, more environmentally friendly-which is a shame. Not even a great product can survive the dishonest/purposely incompetent local representatives.